Bread is my absolute favorite food in the world, but cheese is number two.  I like cheese more than I like chocolate, which is saying a lot.  You may have noticed that 2 of the 24 goals I've accomplished during my 40th year have been making cheese (cottage cheese and ricotta cheese).  Well, Goal #25 was a cheese goal also!

I'd never heard of squeaky cheese until I visited Tillamook, Oregon in 2010. I've eaten a lot of great cheese in my day, but the Tillamook Cheese Curds (aka Squeaky Cheese) are so amazingly unique and delicious. They are so fresh that they literally squeak against your teeth as you eat them. It was tempting to buy a case of them so that I could enjoy them for weeks to come, but alas, they lose their awesome squeak after just a day or two. Unless you live near a place that makes them, the only way to enjoy squeaky cheese is to make it yourself.

I found a recipe at culturecheesemag.com that seemed promising. I had all the necessary ingredients (due to an awesome Christmas where both my sister AND my mother-in-law bought me cheesemaking kits). The steps for squeaky cheese were very simple, although extremely time-consuming. As it turned out, there was also a critical step missing. More on that later.

First, I brought the milk to temperature and held it there for an hour (which meant very frequent monitoring). Then I added calcium chloride and rennet and let it sit for the required 45 minutes. 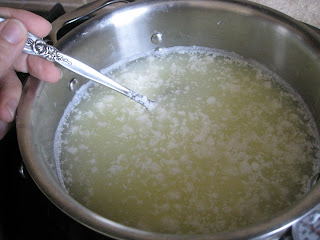 After the rest period, I had to cut the curd and let it rest again.  The next step was a real pain.  The curd had to come to temperature, then it needed constant stirring for 45 minutes. If Steve hadn't been there to switch off with me, I think I would have pretended I misunderstood and just stirred it occasionally.  45 minutes is a LONG time to stir constantly.

The draining, molding and cheddaring steps meant about 1 minute of work every 15 minutes for 2+ hours.  The first few times were fine, but I was pretty annoyed during the second hour. It's hard to get anything else done with 14 minutes in between dealing with cheese, especially since I had to sterilize every time I came back to it. 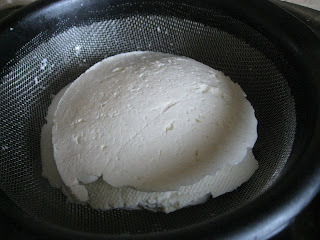 Around the time I was doing the slicing and salting steps, I realized that I had not yet used one of the ingredients in the recipe (mesophilic culture).  I read through the recipe again very carefully, but the mistake was not mine: it is in the ingredients list but not included in any of the steps.  Aargh! 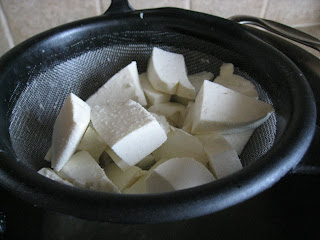 By the time I got to the finishing step, I was definitely ready to be finished!  No matter how tasty the final result, I had already decided I wouldn't be making squeaky cheese again any time soon.  Not when making homemade mozzarella, cottage cheese, and ricotta were all so much faster and easier. 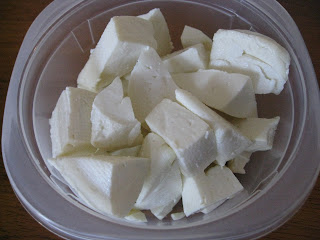 I *finally* tasted the squeaky cheese and was relieved to hear the squeak.  Goal accomplished!  The flavor was very mild and milky.  I'm guessing that the missing culture would have boosted the flavor and made for a better finished cheese.  Perhaps someday (though NOT soon!) I'll give it a try.
Email ThisBlogThis!Share to TwitterShare to FacebookShare to Pinterest
Labels: 40 Things