Trevor has been reading the Nate the Great series by Marjorie Weinman Sharmat.  At the back of each book are all sorts of fun activities- crafts, cooking projects, and the like. Trevor was really excited by the "Octopus Pops" from Nate the Great and the Stolen Base.  Basically, you put gummy worms into Dixie cups, add juice and sticks, put them in the freezer until they set, then tear off the cup and enjoy an adorable frozen octopus pop.  It sounded fun and easy.

But it's not exactly popsicle weather right now.  I promised Trevor that we would make these when it warmed up a bit and suggested that in the meantime we try a version using Jello. He wasn't convinced.  He really wanted to follow the directions in the book and didn't trust that this would be an acceptable version of the adorable octopuses he was so eager to make. "What could go wrong?" I asked.  "They'll be great!" I promised.  He reluctantly agreed.

The first problem happened when we opened our package of gummy worms.  Trevor was adamant that he wanted red or purple octopuses, so I'd chosen cherry jello.  When I bought the bag of gummy worms, there was no way to tell what the breakdown of red worms vs. other colors would be.  As it turned out, the package was at least 75% green.  There weren't 8 non-green worms in the entire package.  He dealt with this disappointment well, deciding that there'd be one octopus with alternating red and green legs and the others would have green legs. 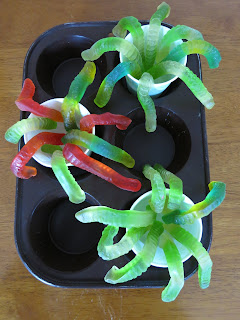 Once he'd carefully arranged the 24 legs, he shoved the 2 extra red legs into his mouth. 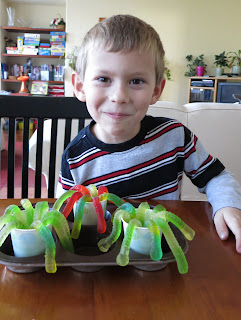 With the legs arranged just so, we mixed up the Jello.  We let it cool a bit (not enough, as it turned out), then poured it in.  We only slopped a tiny bit on the table and into the muffin tin. 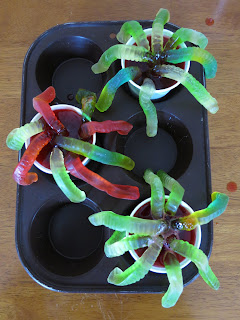 I gently placed the octopuses in the refrigerator.  When we checked on them a few hours later, we found this disaster. 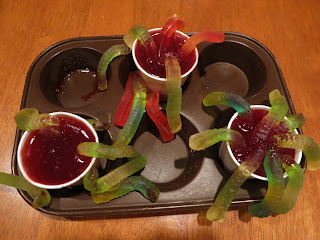 Some octopus legs had melted off entirely into the Jello.  Others melted or softened partially, then slumped out of the cup.  Clearly, adorable octopuses were not in our near future.  One looked semi-promising, so I turned it out onto a plate.  I snapped this picture.... 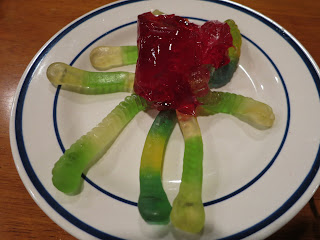 ... then as I moved to look for a better angle, the whole thing fell apart into this hideous mess. 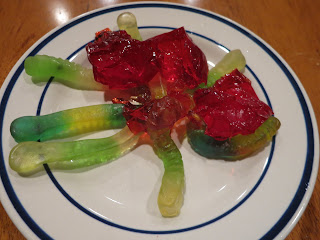 Not exactly the cute octopus Trevor had requested! 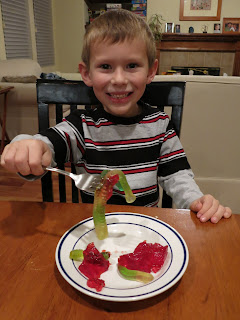 Fortunately, it still tasted pretty good.  In fact, it was probably easier to eat knowing we weren't destroying an adorable octopus!
Email ThisBlogThis!Share to TwitterShare to FacebookShare to Pinterest
Labels: Crafts for Kids