Trevor loves penguins. Of course, who doesn't? When I saw the penguins Kristin Thomas' 1st graders made, I knew we'd have fun making our own. Here's my penguin: 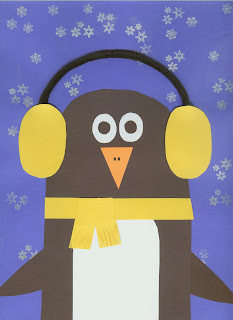 Materials: construction paper (blue, black, white, orange, and another color for the scarf and earmuffs), silver ink and snowflake stamp, scissors, glue, and a black sharpie. I also ended up using a black pipe cleaner. 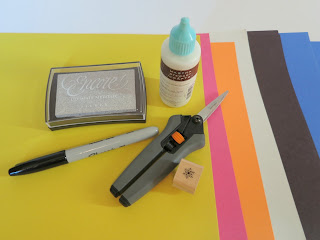 Cut a smaller U-shaped tummy from the white construction paper. Use the scraps to cut two circles for eyes. Use the sharpie to add pupils. 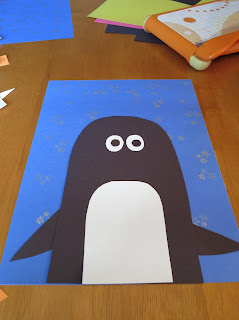 Add an orange triangle beak. To make the earmuffs, cut two flattened circles. The scarf is made from three rectangles. I cut fringe into one end of the two smaller rectangles. 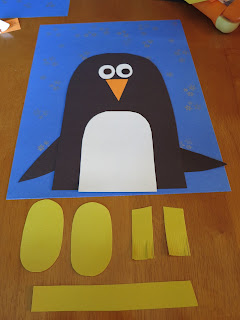 Before gluing everything into place, use the sharpie to draw an arc to connect the earmuffs. Or, use a black pipe cleaner to form an arc. I like the dimension of the pipe cleaner, but drawing it is much easier! Finally, fluff up the fringe of the scarf.

Here's another look at my finished penguin.

And here is Trevor's: 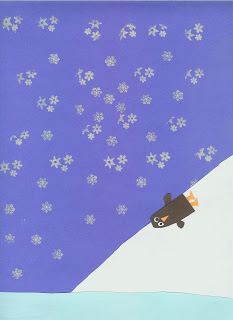 He'd started out so eager to make an earmuff penguin, but only got as far as stamping the silver snowflake background before he changed his mind and went his own direction. As much as I wanted to see what his interpretation of the earmuff penguin would be, I love the fact that he has his own artistic vision and is so creative.
Email ThisBlogThis!Share to TwitterShare to FacebookShare to Pinterest
Labels: Crafts for Kids