I found some friends who were interested in going and we purchased tickets for Sacramento. I was pleasantly surprised that we were able to get good seats fairly inexpensively.  About 20 minutes before start time, the Globetrotters' mascot (Globie) came out for a pre-show.  Then the Globetrotters and their opponents (the Global Select) took the court to warm up. 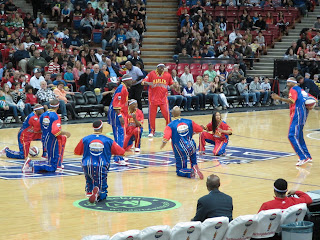 The game started with plenty of action and a lot of laughs.  There were a lot of tricks and antics that I remembered from back in the 70's and 80's, but there were others that I'd never seen before.  My favorite was when one of the Globetrotters pulled up onto the basket and KICKED his opponent's shot before it could go through the net. 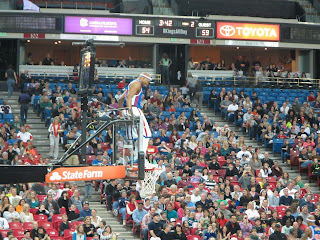 At half-time, the Globetrotters' mascot Big G came out.  It was the funniest thing I've seen in a long time.  I was laughing so much I was crying.  Steve took video of the routine; he was laughing so hard that the video is shaking like crazy.  If you have nothing better to do, check YouTube for a video of Big G. 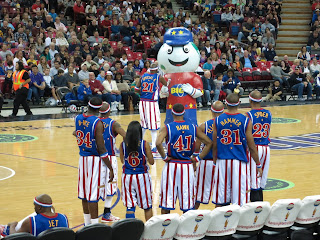 Several interesting things to mention about the current Globetrotters roster.  First, there are women on the team now.  T-Time played in the game we watched.  You can easily make her out in the picture above.  She's 5'6". 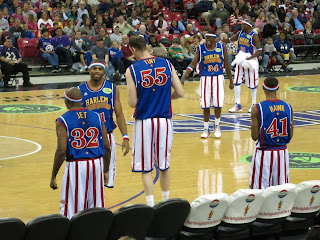 Second, the Globetrotters' Tiny holds the world record as the tallest professional basketball player.  He's 7'8".  You can easily make him out in the picture above.  For comparison, Jet is 6'3". 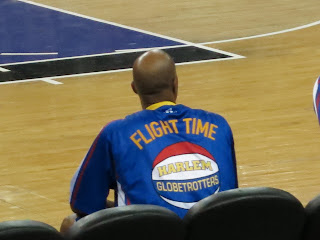 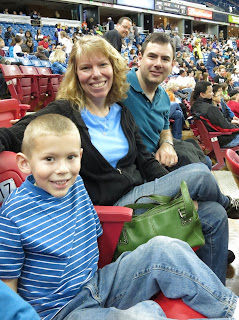 We had so much fun watching the Globetrotters!  Thanks to Ken, Sheena and Devin for joining us for Goal #36!
Email ThisBlogThis!Share to TwitterShare to FacebookShare to Pinterest
Labels: 40 Things