When I picked Trevor up from school last week, he was very excited to show me one of the papers in his folder. He flung all the other papers aside and proudly showed me this: 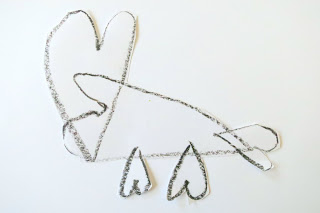 He explained that he'd had an idea about making a bunny using only hearts and that he was going to teach me how to do it. I absolutely love when Trevor teaches me how to do a craft that he's thought up. He instructed me to get grey paper, scissors and glue.

I'd hoped that Trevor would be making a bunny as well, but he told me that he would only be the teacher this time. He told me to cut one big heart for the body, a medium heart for the head, two smaller matching hearts for the feet, and one more heart for the tail. When he was satisfied with my hearts, he let me stop to take a picture of them. 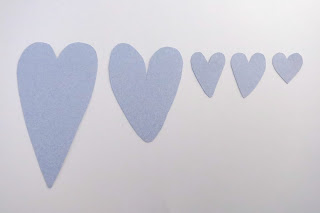 Next, Trevor showed me how to arrange the hearts to make the bunny. As he was doing so, he decided that the feet looked better with the hearts oriented sideways. I asked him if I could ink the edges of the hearts to make it easier to see the different body parts and he said yes. I chose a toffee colored ink, since Trouble has both grey and tan tones.

At this point, Trevor noticed the tiny heart punch that was sitting out from a different project. He had me go back and get pink and black papers, then punch out a nose and two eyes.  Then I glued everything in place. 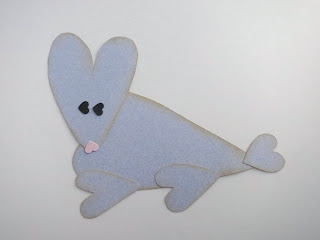 Trevor was thrilled with my rabbit and declared it done. I asked about adding whiskers. He was adamant: NO whiskers! The entire thing HAD to be made from hearts. I tried arguing, but it was no use. There were to be NO whiskers unless I could make them from hearts. Trevor can be a bit opinionated at times.

The next day, when Trevor was occupied with something else, I added whiskers to my bunny. I like it a lot better this way. 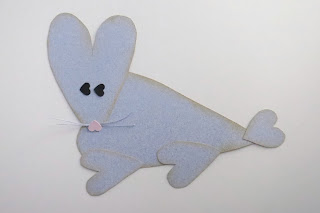 When Trevor eventually noticed that my rabbit had sprouted illicit whiskers, he cracked up. "Mommy!" he giggled. "There are NOT supposed to be whiskers on that bunny!" Fortunately, he let me keep them. I really do like the bunny better with the whiskers.
Email ThisBlogThis!Share to TwitterShare to FacebookShare to Pinterest
Labels: Crafts for Kids, Rabbits, Valentine's Day