Steve has been saving for an iPad for awhile now. He got a gift certificate for his birthday that allowed him to finally buy it. It just arrived. I've never used an iPad and wasn't aware of what features it had, so after dinner Steve gave me a brief rundown.

When he showed me the note-taking/drawing feature, it reminded me of the tablet things that the Project Runway designers use to sketch their challenges. Using my best Tim Gunn voice, I announced "Designers, your challenge today is to be inspired by New York! You have 30 minutes to sketch and then we're headed to Mood."

Using my finger (we don't have a stylus), I started sketching. (As it turns out, sketching with one's finger is not easy.) I decided I was on the team that went out on a boat, looking back at New York.  I designed an easy-to-wear shift. Can you guess my inspiration? 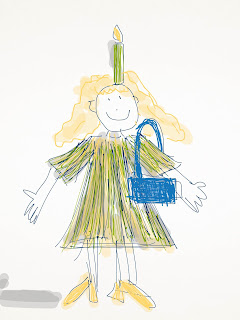 I chose a beautiful fabric with a strong vertical in greens, yellows and greys. I made a coordinating hat that creates a unique silhouette. I used the Piperlime Accessory Wall (or is it Lord & Taylor now? I can't keep it straight) to choose an interesting pair of yellow shoes and a blue bag for a pop of color. My woman is sophisticated and on-the-go.

Unfortunately, Nina was bored and felt it wasn't editorial enough. Heidi felt it was far too literal. Michael Kors (who should still be on the panel) felt that it was something women would want to wear, but my construction skills were poor. I'm pretty sure I'm going to be in the bottom this week.

Steve took the iPad from me. I just about fell on the floor laughing when he said with a straight face, "Mine isn't going to look very good. I'm not an artist like you!" Um, did you just look at my sketch?!?

Steve's fingers are bigger than mine and he had even more trouble than I did controlling the lines. Still, it was easy for me to see his inspiration. 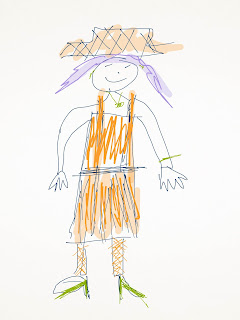 Steve created a rust-colored sheath, inspired by the Brooklyn Bridge. He made a matching hat and added textured tights in the same shade. He chose green shoes, a green bracelet, and a green necklace from the Bluefly (or whoever it is this season) Accessory Wall. He directed the Loreal hair and makeup artists to create edgy purple hair and a clean face.

Heidi hated the look. "It's too matchy-matchy!" she cried. "I hate matchy-matchy!" The other judges nodded, but Nina commented that at least she wasn't bored. This was something none of them had seen before. Michael Kors felt that the dress was well-made, but that Steve ruined it through poor accessorizing. He too was worried he was facing elimination.

Trevor watched all of this with interest. He doesn't watch Project Runway with Steve and me, so he didn't know what we were even talking about, but he wanted to play around with the iPad as well. He's never been to New York, so I told him to design a dress inspired by a city. 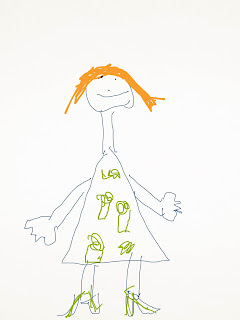 He chose to be inspired by the mountains that surround a city. He made an A-line dress with a tree/shrub print on it. He added green pumps and no further accessories.

The judges felt it was too simple and that Trevor was playing it safe, but they let him pass on to next weeks' challenge.


And that, my friends, is how the deRosiers spend a typical weeknight.
Email ThisBlogThis!Share to TwitterShare to FacebookShare to Pinterest