In March, I introduced Project 41, my plan to try each flavor-of-the-month at Baskin Robbins with a different friend as a year-long celebration of my 41st birthday.  Ever since I announced Project 41, people keep asking me what I would do if I didn't like the flavor-of-the-month.  I wasn't too worried about it.  The only flavor that is regularly put in ice cream that I don't like is coffee.  I knew there would be a fairly good chance I'd be eating coffee ice cream at some point this year.  All part of the adventure, I guess.

As it turns out, that adventure came sooner rather than later.  April's flavor: Jamoca Heath, a "combination of coffee-flavored ice cream and crunchy Heath bar candy pieces." I can't stand the taste or smell of coffee, but I don't think I'd ever had it in ice cream before. I do love Heath bars though.


I talked with two friends who had commented on my original post that they wanted to join me, but scheduling didn't work out for this month.  As I thought about who else to invite, a former MOMS Club member named Maria popped into my head.  It surprised me.  No offense to Maria, but I hadn't seen her or even really thought about her in about a year.  But I had an overwhelming feeling that she was the friend who should join me.  I sent her an email asking her if she'd join me for ice cream, my treat, but that she couldn't pick the flavor... which, if you think about it, is a pretty weird thing to hear from anyone, let alone someone you knew from a club and haven't talked with in a year.

Fortunately, Maria didn't think I was insane and agreed to meet me.  I'm so glad she did.  We had a wonderful time together. 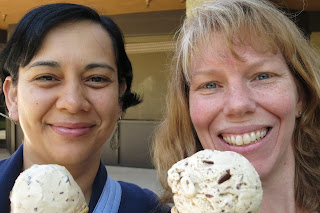 We talked a lot about my 40 Things, Project 41, and my efforts to Try.  I left feeling great about all that I've accomplished recently and excited about my plans for the future.  She left inspired to create her own lists of adventures and blog about them.  Within a few hours of saying goodbye, she emailed me about her plans for her first adventure.  I can't wait to hear how it goes.  I've already told her to plan on me joining her for at least one!

So how was the ice cream?  I'm happy to report that we both really liked it!  I was very pleasantly surprised that it didn't taste like coffee at all, but instead it reminded me of a mix of caramel and butterscotch.  The Heath bar was delicious in it.  I definitely recommend it! 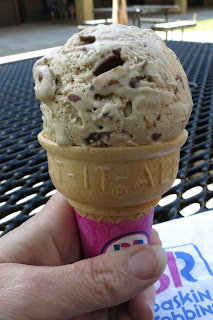 Thanks again to Maria for such a wonderful afternoon!  I'm so excited to see what future months of Project 41 will bring!
Posted by Cindy deRosier at 5:00 AM