It's hard to believe it is December already!  Having a blog break last week meant that I didn't share November's Project 41 during November, so here it is.

This time, my Baskin-Robbins flavor-of-the-month companion was my friend Natalie.  I first met Natalie when Trevor was an infant.  Natalie was pregnant with her only child when she joined our MOMS Club.  Her daughter is exactly 13 months younger than Trevor.  We saw each other often when the kids were young, but when we got together for ice cream in November, it was the first time Natalie and I had seen each other in well over a year.
November's Flavor-of-the-Month was Gingerbread Junction.  According to the description, "gingerbread and vanilla ice creams intersect with a cinnamon caramel ribbon to create the taste of a just-baked gingerbread cookie dunked in a cool glass of milk."  I like gingerbread and vanilla and cinnamon and caramel and cookies and milk, so it sounded promising. 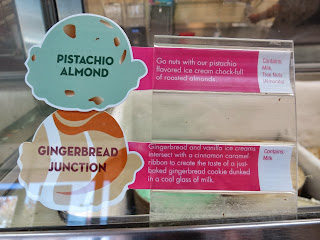 Here's how it looked. 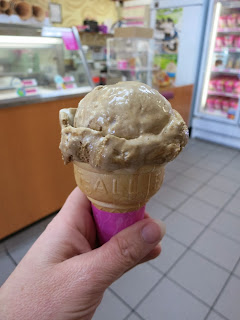 As it turned out, I did not like Gingerbread Junction.  The cinnamon was really weird and the whole thing tasted off to me.  Of the 9 flavors I've had so far, this was by far the worst.  It was much worse than my previous least-favorite, Blueberry Shortbread.  While I probably wouldn't pay to have Blueberry Shortbread again, I wouldn't eat Gingerbread Junction again even if it were free. Yuck.

Fortunately, the time with Natalie more than made up for the lousy ice cream flavor.  It was wonderful to catch up. 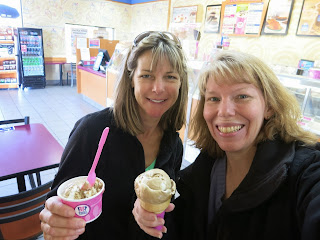 Three more months of Project 41 ahead!
Email ThisBlogThis!Share to TwitterShare to FacebookShare to Pinterest
Labels: Project 41