Now that the recipients have their gifts, I can begin sharing some of the homemade gifts I made! First up, a second version of a Dollar Bill Dispenser.

I have four boys ranging from 13-21 on my gift-giving list. I'm pretty sure that teenage boys are the most difficult people to shop for, unless you have a large budget and very specific instructions of what to buy. Since I had neither, the choices were: 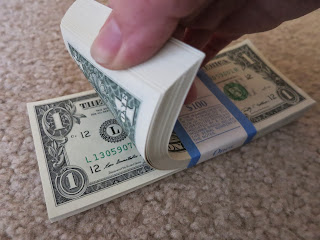 I made my cousin's son Ryan a red Dollar Bill Dispenser that was similar to the purple one that went to Courteney. I thought I took a picture of it before mailing it off to Spokane, but apparently I did not.

For my sister-in-law's two boys, Ian and Sean, I decided to try a different style of Dispenser. I started by painting two empty square Kleenex boxes with a coat of gesso. 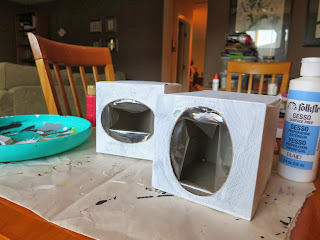 When that was dry, I painted one box black and the other red. 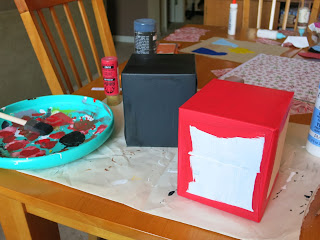 While they were drying, I started taping dollar bills together, end to end. Then I rolled them up. I rubbed-banded the two bundles and set them aside. 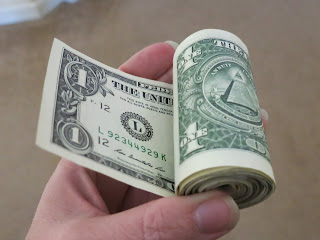 Next, I covered the sides of each box with Christmas-themed patterned paper. I pushed one square of tissue paper down into the box and fluffed it to cover the top of the box. Then I stamped the word PULL onto a piece of white cardstock, used a border punch on the end, and taped it to the roll of dollars. I placed the roll down into the Kleenex box with the PULL tab protruding out of the tissue paper. 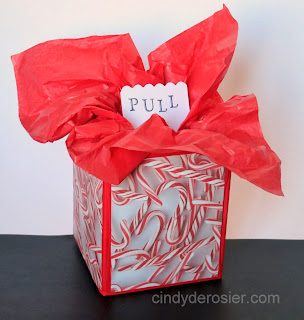 And here is the snowman box for Ian. 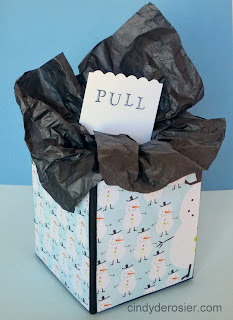 They were a hit. Both were a bit nervous to pull the tab, thinking it was going to explode or something. Once money came out, they kept pulling and pulling and pulling. I was really happy that this design worked as well as the cardboard tube style. 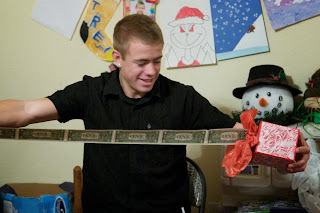 On Monday I'll share the way I gave cash to my nephew Timothy. I had a LOT of fun putting it together and couldn't wait to see him unwrap it.
Email ThisBlogThis!Share to TwitterShare to FacebookShare to Pinterest
Labels: Christmas, Crafts for Kids, dollar, Gifts, money gift, recycle, Sean, tissue box, tissue paper, Trash to Treasure