I've shared three different ways that I gave money as a gift this Christmas (Cardboard Tube Dollar Bill Dispenser, the Tissue Box Dollar Bill Dispenser) and the Knitting Kit). Today I'm sharing the fourth and final money gift I gave. When I thought up the idea, I expected it to be easy.  he project itself was... but gathering one specific item I needed was far more difficult than I imagined it would be. That item? A dollar bill with an "I" on it.

For weeks, I checked my change hoping to receive an "I" dollar bill. I never found one. I asked Steve, my parents, and my sister to do the same. Nothing. Then, I started asking everyone I saw in person to get out their wallet and check their dollar bills. Everyone was surprisingly cooperative, but no one had an "I". As Christmas got closer and closer, I became desperate and turned to Facebook. Within an hour, I had multiple offers from people willing to mail me a dollar and one local friend who said I could come pick it up right away. Hurray!

Before I share my project, an explanation of the letters on bills for those who don't know. There are twelve Federal Reserve Banks that issue paper money in the United States. Each is identified by a number, letter, and city. They are:

Every dollar bill has a seal on it indicating which Federal Reserve Bank issued it. The seal is to the left of George Washington. 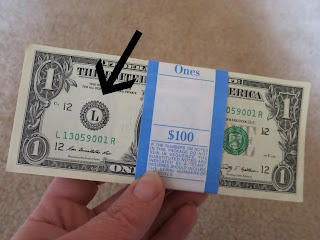 Since I live near San Francisco, all the new bills issued have the "L" seal. Of course, other bills circulate as people move them around, so it's pretty easy to find a variety of letters in your wallet. Except, apparently, when you're hoping to find a particular one!

As I was making the first Dollar Bill Dispenser, I got it in my head that the letters could be used to spell names, words, or phrases and that framing one of those would make an awesome gift. I went down my Christmas gift list checking to see if anyone had a name that could be spelled with only the first 12 letters of the alphabet. Yes, my goddaughter Ellia! Perfect! I needed one more small gift for her to balance what I'd already gotten for her sister. I had tons of L's, an E, and a friend gave me an A. As I already mentioned, it took forever to find that darn I!

With an "I" in hand, I folded the bills to center the letters, then used easily-removed Glue Dots to attach the bills to one another. I used temporary adhesive to put them on black cardstock, then cut a black cardstock frame to hold them in place. I followed this tutorial to create an origami heart from another bill and overlapped it slightly over Ellia's name.

It was a bit tricky sliding everything into the frame without dislodging it. It took more than a few attempts. Obviously, I didn't want to secure the money so firmly that she could never get it out, which meant that it had a tendency to shift around as I squeezed it into the frame. Here's how it turned out. 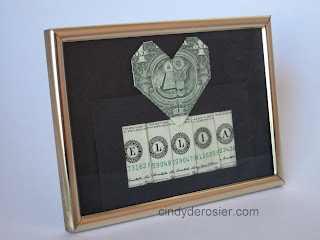 During the many weeks of trying to find an "I" bill, I brainstormed as many names as I could that are spelled with only A-L.  Here are some that I came up with:

The fact that most names use at least one of the other 14 letters makes it all the more special of a gift for someone whose name can be spelled with the first 12. Let me know the name of your recipient if you end up making one!
Email ThisBlogThis!Share to TwitterShare to FacebookShare to Pinterest
Labels: Gifts