Because I'm on Baskin-Robbins' mailing list, I know what the Flavor-of-the-Month is before I visit the store to try it.  In 11 months, there have only been two times when I learned what the flavor would be and was worried that I wouldn't like it.  The first time was in April when the flavor was Jamoca Heath.  I can't stand coffee and usually don't like coffee-flavored stuff.  I was pleasantly surprised when I tried the ice cream and liked it. 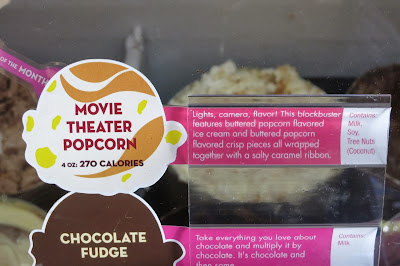 I had serious concerns that it would be awful.  I can't stand Buttered Popcorn Jelly Bellies and was afraid it would be similar.  Here's how it looked: 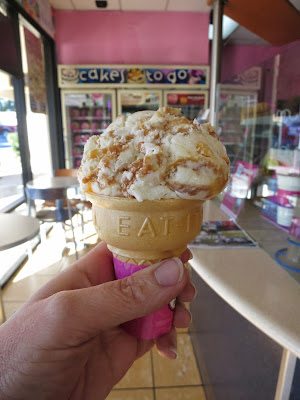 My companion this month was Jennifer.  I met Jennifer in early 2008 on the forums at Scrapbook.com and in person about a month later.  She was the one who trained me as a Certified Fiskars Demonstrator and recruited me as a Fiskateer.  We live about 30 minutes apart and get together for crafting every few months.  She was my assistant when I taught the Quilling 101 workshop two years ago. 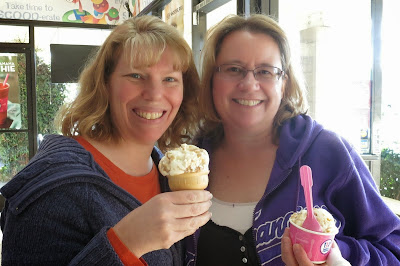 We actually had a third friend, Sheena, with us. The three of us spent the morning visiting one of the few remaining Bay Area scrapbook stores, Scrapbook Territory in Berkeley. Sheena and I had never been before and the three of us had been talking about going for over a year. We spent 2 hours there, looking at every single product they had for sale.  We had lunch on the waterfront and then our Baskin-Robbins ice cream in Jennifer's town.

Neither Jennifer nor I thought that Movie Theater Popcorn ice cream would be a good idea, but I'm happy to report that we both really liked it! The ice cream itself was like a salty vanilla with lots of caramel.  In it were candy-coated crunchy bits that were shaped like popcorn and tasted vaguely of popcorn (in a good way). I would definitely eat it again.