Back when I was doing 40 new-to-me things to celebrate my 40th birthday, one of the items on my list was to cook from a mystery basket.  I'd recommend reading (or re-reading) that post before reading this one.  I'll wait.....

... ok!  We had such a great time with our original Chopped Challenge that it was only a matter of time before we had another one.  But this time, Steve would be the chef!  Trevor and I headed to the grocery store to pick out the four mystery ingredients. 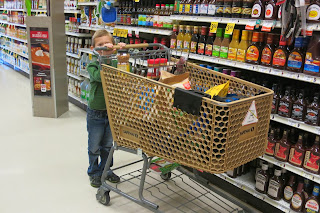 Trevor was giddy as we went up and down the aisles, bouncing the whole time (which is what he does when he is really, really happy).  We spent a long time selecting the perfect items.  We settled on sparkling apple cider, honey roasted peanuts, a tube of refrigerated pizza crust, and Jennie-O Turkey. 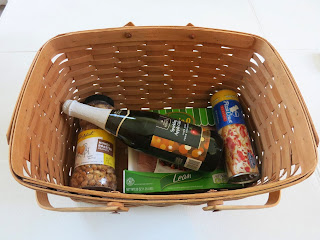 Steve and I watch Biggest Loser together, which means he's seen PLENTY of ways to cook Jennie-O Turkey.  I've never bought it before, but I couldn't resist for this challenge.  Once I saw it, I was really tempted to put together a basket of only the products they shill on Biggest Loser, but Trevor (who doesn't watch the show) rejected that idea.

When it was time to begin, I made Steve put on Trevor's toddler-sized toque (hilarious), set the timer, and let him see the ingredients. 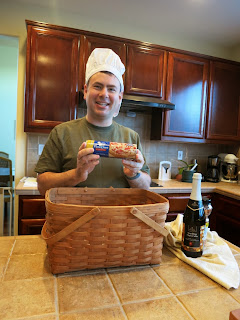 It took him a few minutes of basically doing nothing (looking at the pantry and returning with nothing, staring at the fridge, getting out pans and putting them back) before he got started. The first thing he did was make a mocktail for the judges using sparkling apple cider and grenadine.  The judges were pleased. 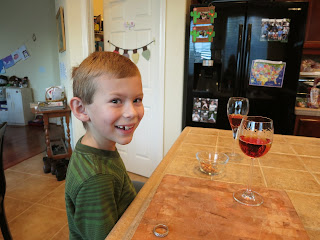 Turns out Steve was stalling.  Suddenly, an idea came to him and he was a blur of action.  He cooked the turkey while chopping carrots.  He sauteed broccoli in butter.  He spread out the pizza dough on a sheet pan and combined apple cider and dijon mustard in a bowl.  He chopped peanuts and set them aside.  The judges were perplexed.  The judges were also impressed. Steve usually struggles with multi-tasking, but he was handling it like a pro.

Next, he put the cooked turkey and broccoli on the pizza crust and added some grated cheeses and a little barbecue sauce. 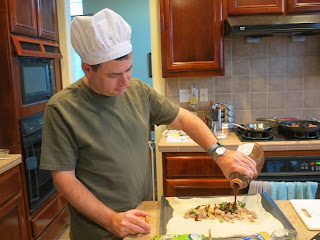 He folded the pizza crust over the fillings and put it in the oven.  Then he added oil to his apple cider and mustard mixture and started assembling a salad.  The judges entertained themselves with some self-portraits... 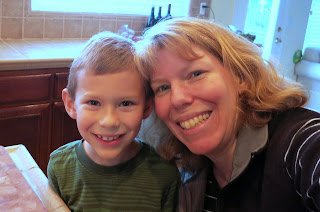 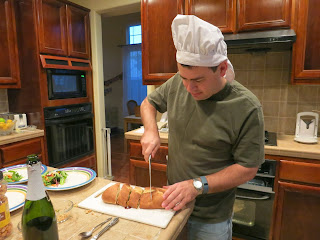 He presented the meal: "I've prepared a stromboli, stuffed with Jennie-O Turkey, sauteed broccoli, a blend of cheeses, and barbecue sauce.  I've served it with a salad of mixed greens, carrots, mozzarella, bacon, and chopped honey-roasted peanuts, dressed with a vinaigrette of dijon mustard, olive oil and sparkling apple cider.  Your mocktails are a blend of sparkling apple cider and grenadine.  Enjoy." 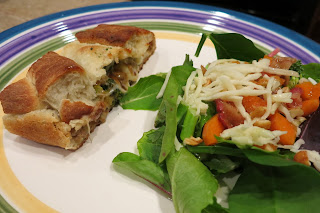 It was absolutely delicious!  Both judges were quick to declare Steve the Chopped Champion. We'd both be thrilled to eat this meal again and again.
Email ThisBlogThis!Share to TwitterShare to FacebookShare to Pinterest
Labels: Cooking Competition