I love throwing dinner parties. I don't host dinner parties nearly as often as I used to, but I still manage to have at least a few a year. It's pretty much a guarantee I'll host a dinner party on New Year's Eve. The most awesome, incredible, over-the-top dinner party I've ever hosted was on Dec 31, 1999, when I made a six-course formal meal for twelve with each course paired with a wine. (You can read about it here.) Last year, I hosted a "New" Year's Eve dinner, where all the foods I served had the word new in them. It was great fun.

When I thought about what I wanted to do for New Year's Eve dinner this year, I tossed around a few ideas before deciding on an Iron Chef - inspired battle. I would pick one secret ingredient and challenge myself to prepare five courses that featured that ingredient. Because we do not have a Kitchen Stadium in our house, I would be the only chef. Because I am not insane or a masochist, I would have more than an hour to cook.

For the appetizer course, I served Crispy Mashed Potato Balls with a Bacon and Chive Dip. I started with cold mashed potatoes (prepared ahead of time and refrigerated), added cheddar cheese, formed them into balls, rolled them in crushed potato chips, and baked them in the oven until they were piping hot and crispy. The dip is sour cream, bacon, and chives. 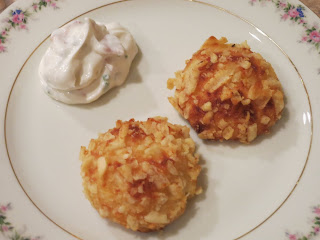 I called the second course Potato Salad, though it was quite different from what people expect when they think of potato salad. I baked a potato, cubed it, then soaked the cubes in ranch dressing and added them to a salad of mixed greens, cheese, avocado and bacon. 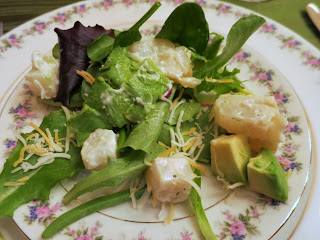 Next up, Potato Bread. I used this recipe. 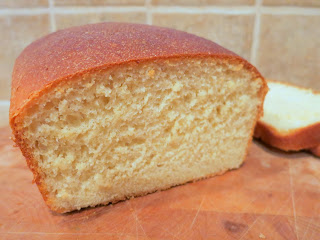 I served the bread alongside Pot Roast with Carrots and Potatoes. 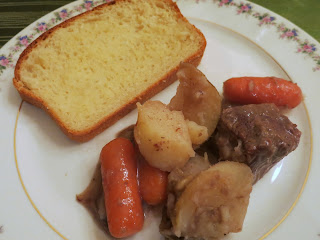 The dessert course consisted of three items. The first was a vanilla ice cream with crushed potato chips. The second was Mashed Potato Candy. 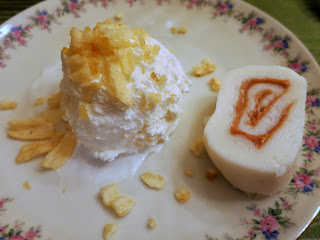 The final component, served to the adults only, was Blackberry Vodka. (Vodka is a potato product, so it totally fits the theme!) I made it by soaking blackberries in vodka for a week, straining out the fruit, then adding a simple syrup. 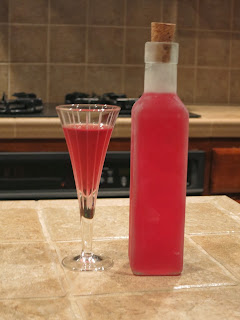 I'm happy to report that all the courses were a success. Everyone had very nice things to say about all the courses, even the more unusual ones. My friends have always been great sports about trying the crazy stuff I make and are not shy about telling me when something isn't very good, so I know that they enjoyed Battle Potato as much as I did. Here's the whole group of us, about ten minutes before midnight. 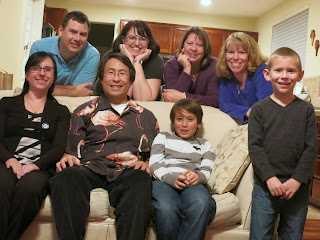 Another wonderful New Year's Eve! I can't wait until next year.
Email ThisBlogThis!Share to TwitterShare to FacebookShare to Pinterest
Labels: Cooking Competition, Parties