How to Make a Money Cake

When I was a kid, my mom always made a Money Cake for my birthday and it was always the hit of the party.  My friends loved finding hidden coins inside their cake.  None of my friends ever had a Money Cake at their birthday parties, so it was particularly special having one at my party.

During college, I mentioned to a roommate one year that we should make a Money Cake for my birthday.  She'd never heard of it.  I asked around.  Nobody had ever heard of it.  Over the years, I have never met a single other person who has ever heard of, made, or eaten a Money Cake, other than people who had attended my birthday parties.  Up until this year, I'd never made one for Trevor.  Time to change that!

My plan had been to drop Trevor off at school on Friday (his last day of school), race home and make the Money Cake, and have it be a surprise for him at his Star Wars birthday party the next day.  My plans were foiled when the principal called to say that the awards ceremony for Trevor and the other kids who made the Accelerated Reader Million Word Club would be that Friday morning.  I had no choice but to spoil the surprise and involve Trevor in making the cake after school got out.


The first step is to gather some coins.  We started with 4 quarters, 15 dimes, 15 nickels, and 15 pennies.  (Larger coins may not fit in your cake, so stick with these denominations.)  Wash them with warm water and dish soap, then dry them with a towel.  Set them aside.  Wash your hands thoroughly, then bake an ordinary cake, using either a mix or from scratch.  We made a yellow cake and baked it in a 13x9" pan.

While the cake is cooling, wrap each of the clean coins in aluminum foil.  You only need a small piece for each coin - just enough to completely cover it. 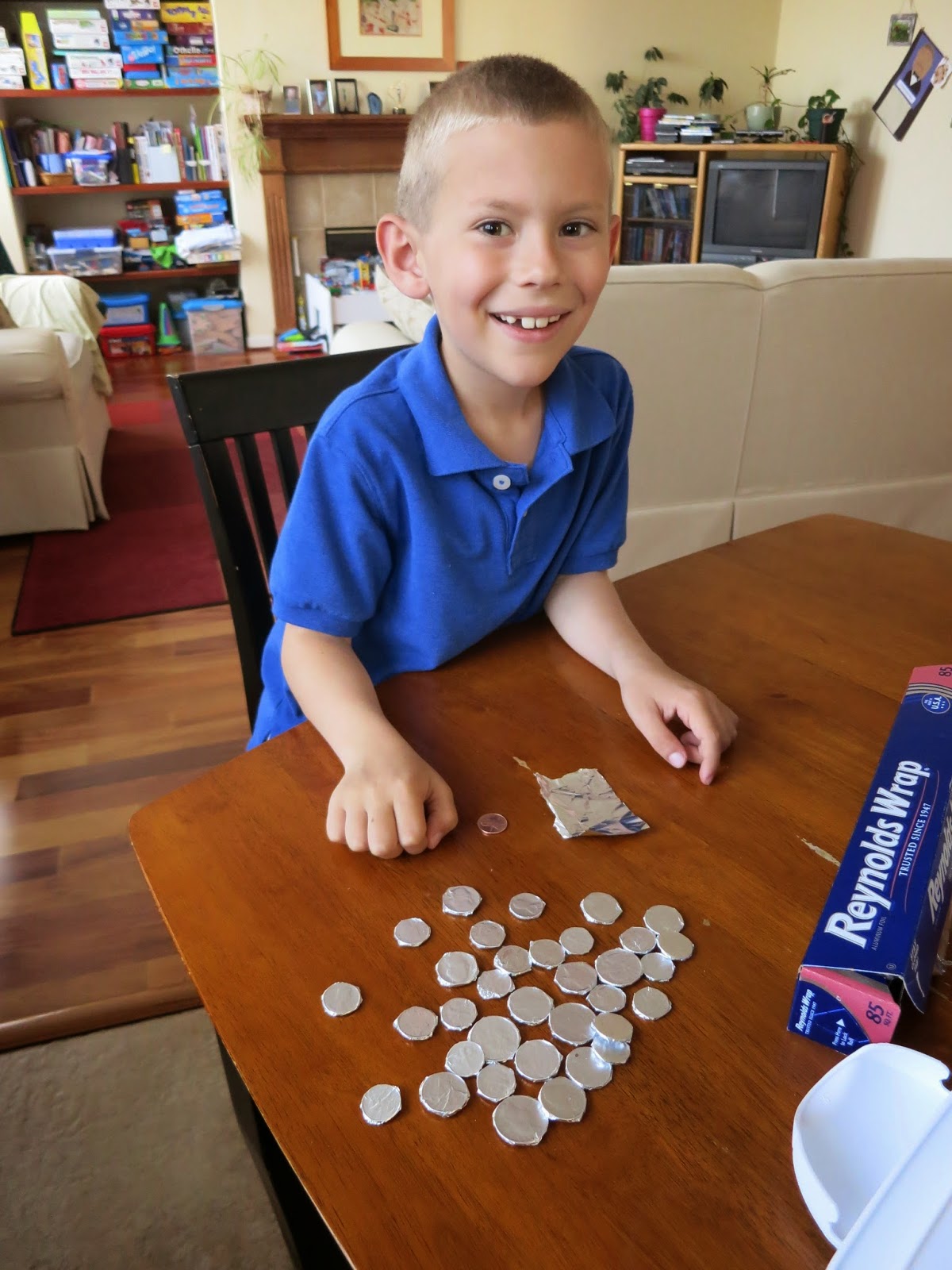 When the cake is cool, gently slide each coin vertically into the cake. 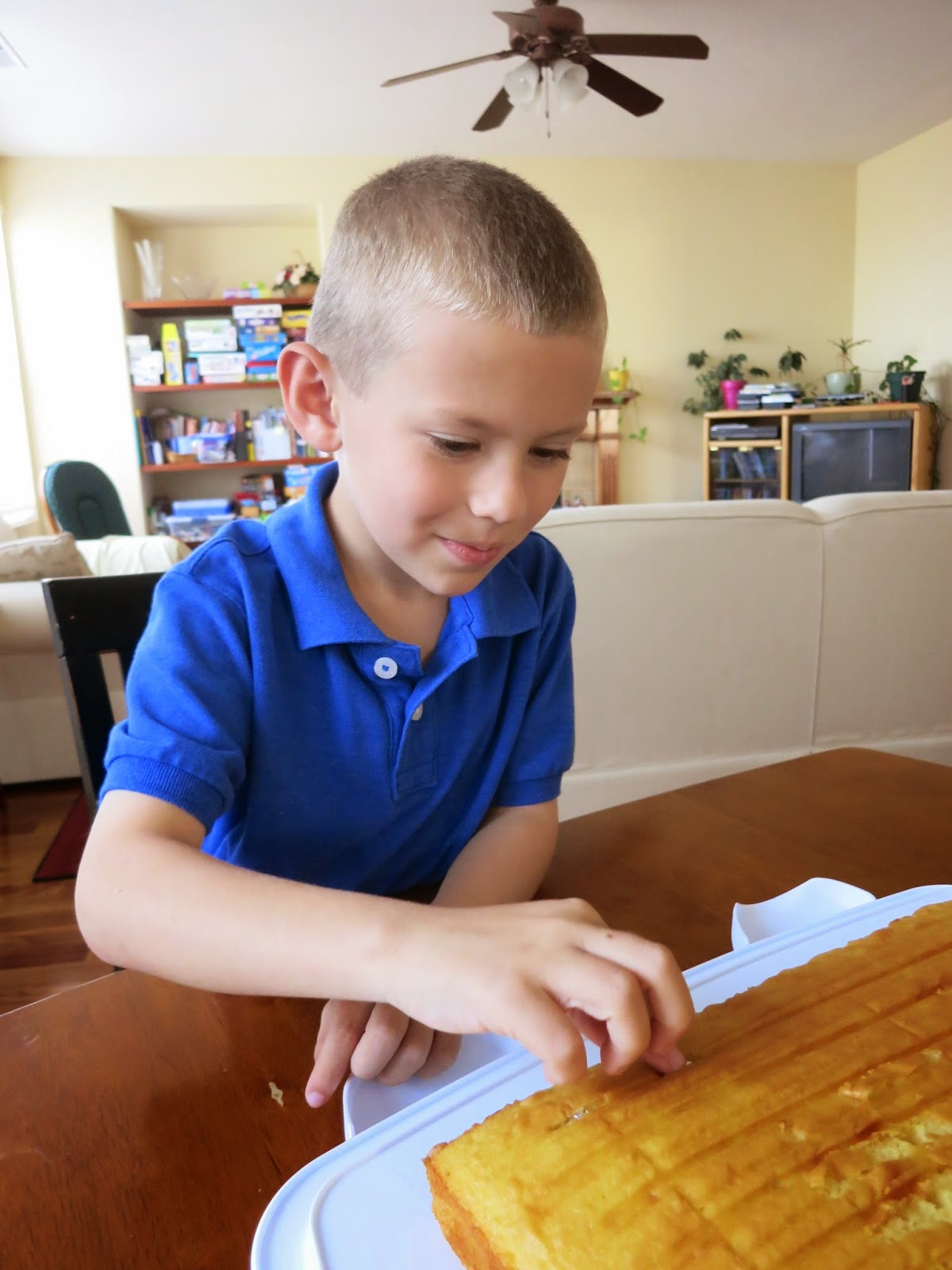 The coins should be distributed evenly around the cake so that everyone gets at least one (and hopefully more). 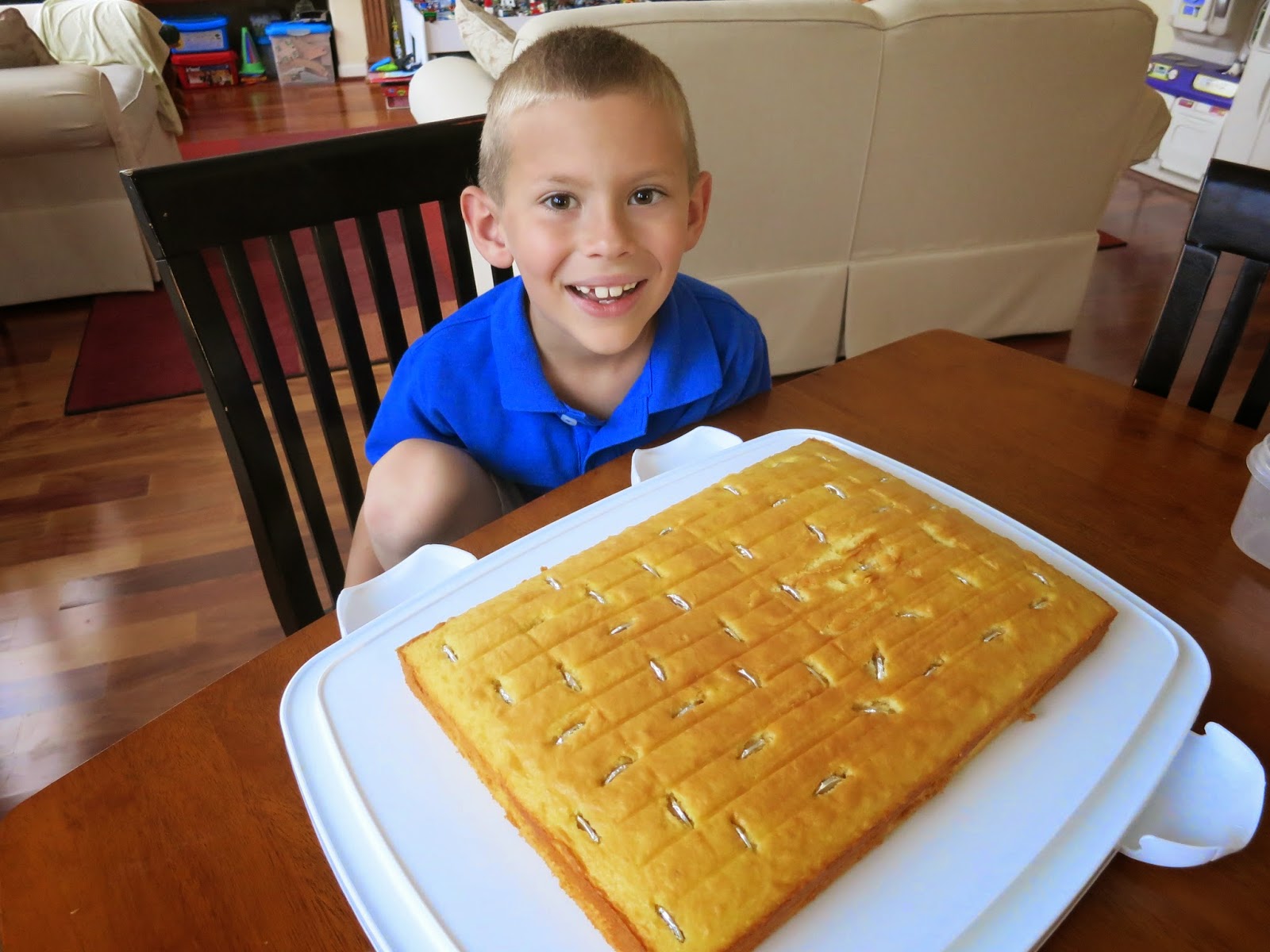 Get down at eye level to make sure there aren't any coins sticking up. 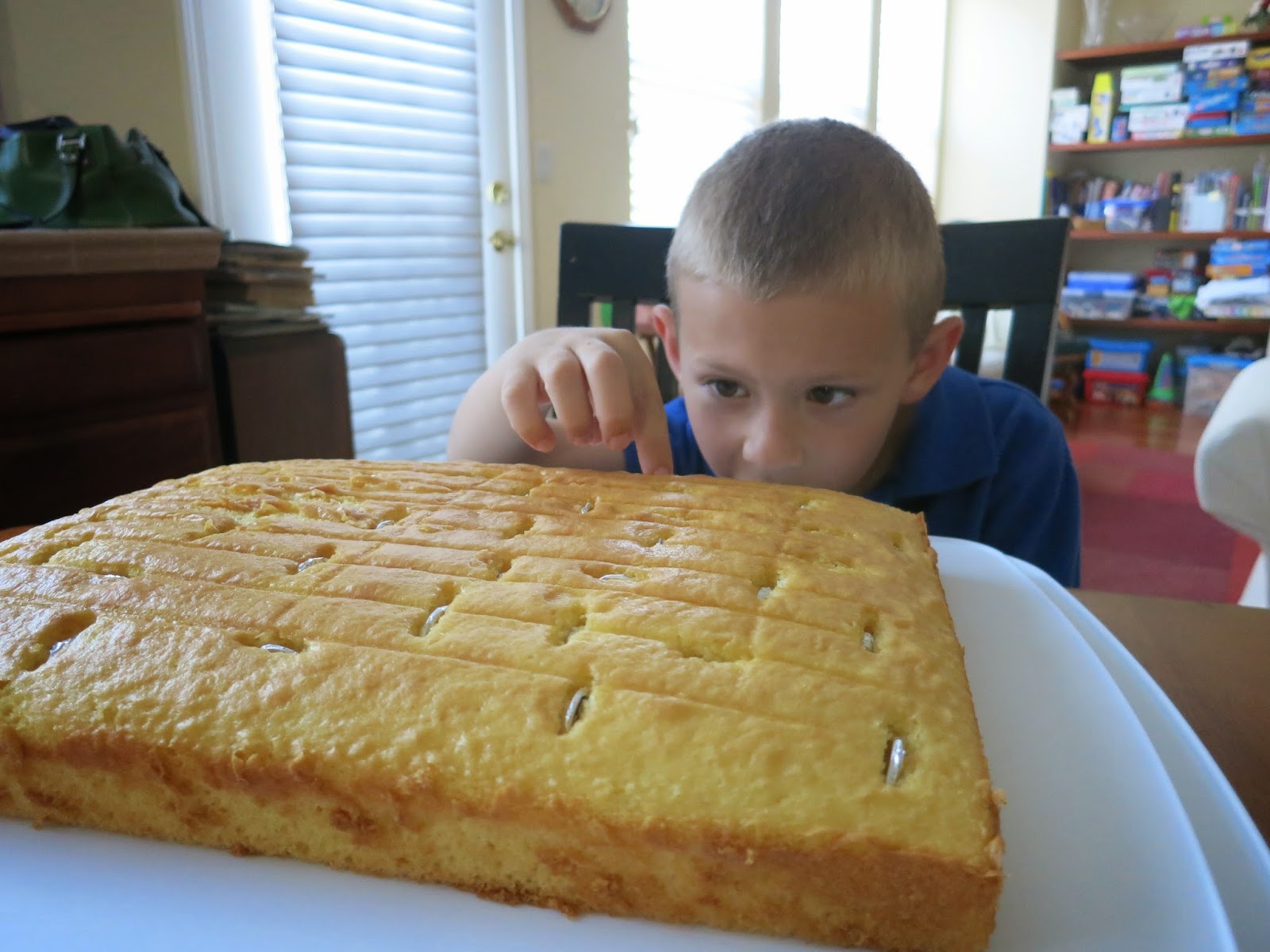 Now frost your cake as usual.  No one will have any idea that the cake has a surprise inside!  At the party, announce to the guests that this is a special cake with prizes hidden inside.  (You don't want anyone accidentally swallowing a coin, which won't happen if they know there's something in the cake.  Even so, I wouldn't serve this to anyone under 4.)  I gave each guest his/her initial in chocolate, with the instructions to "choose your lucky piece!" 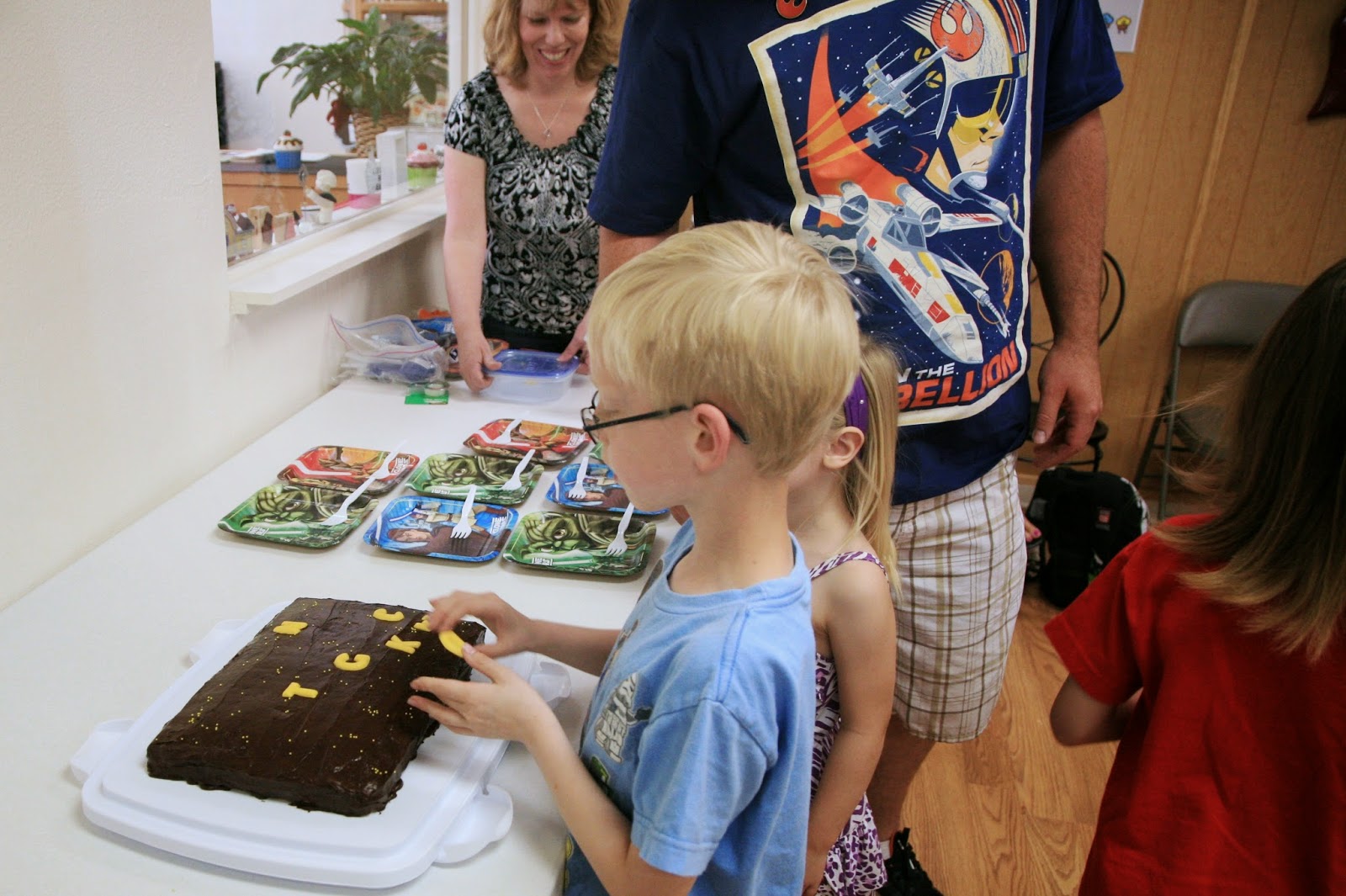 Once everyone had put their initials on the cake, I carefully cut each piece.  Occasionally the knife will hit a coin, but it's not a big deal. 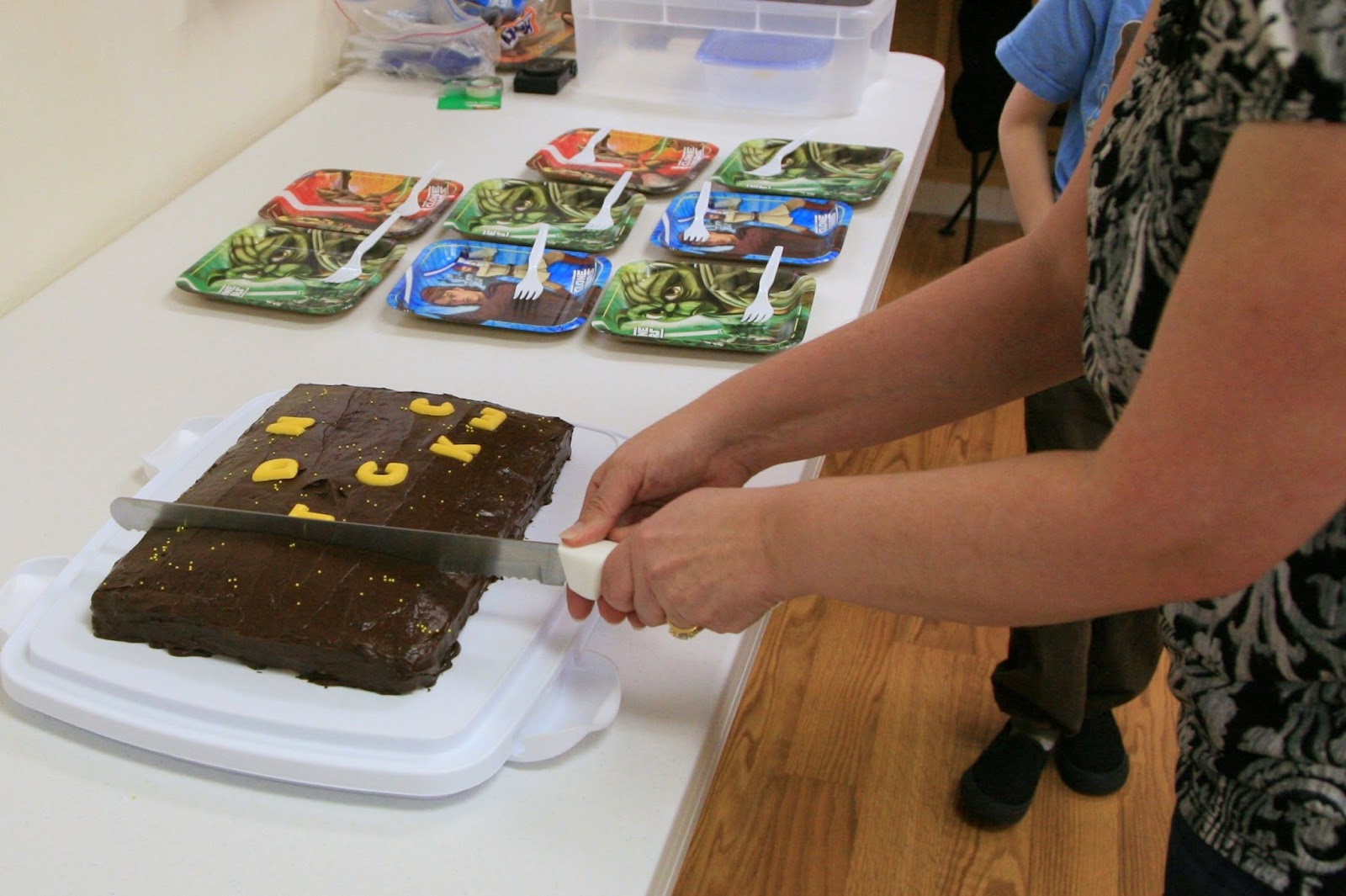 The kids were so excited when they started discovering coins in their cake slices.  There was even more excitement as they unwrapped them to see whether they got pennies, nickels, dimes, or one of the coveted quarters.  The Money Cake was definitely a hit. 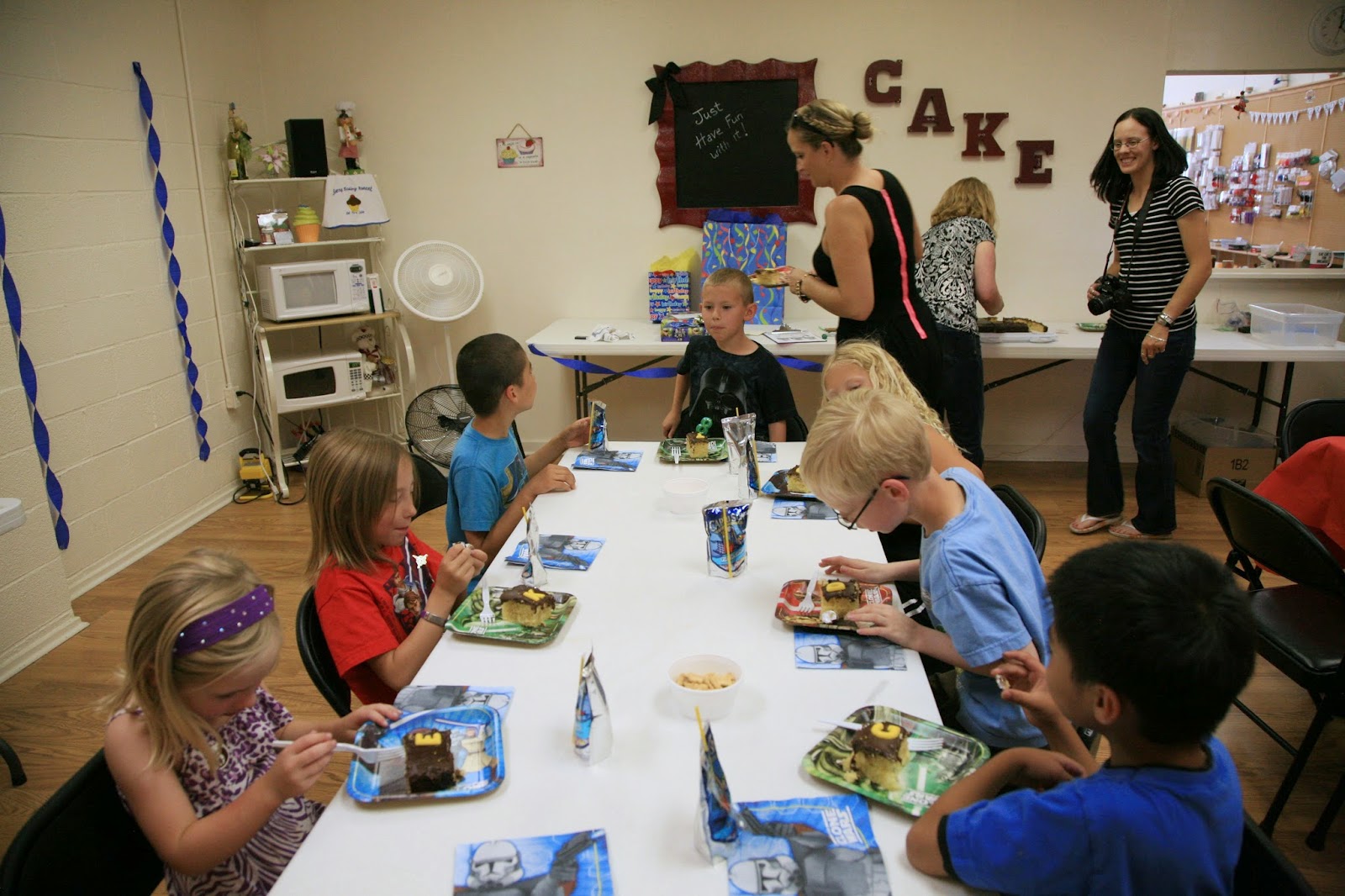 Here's a close-up of what a slice of Money Cake looks like.  Two coins are visible from this angle. Two more were hidden inside. 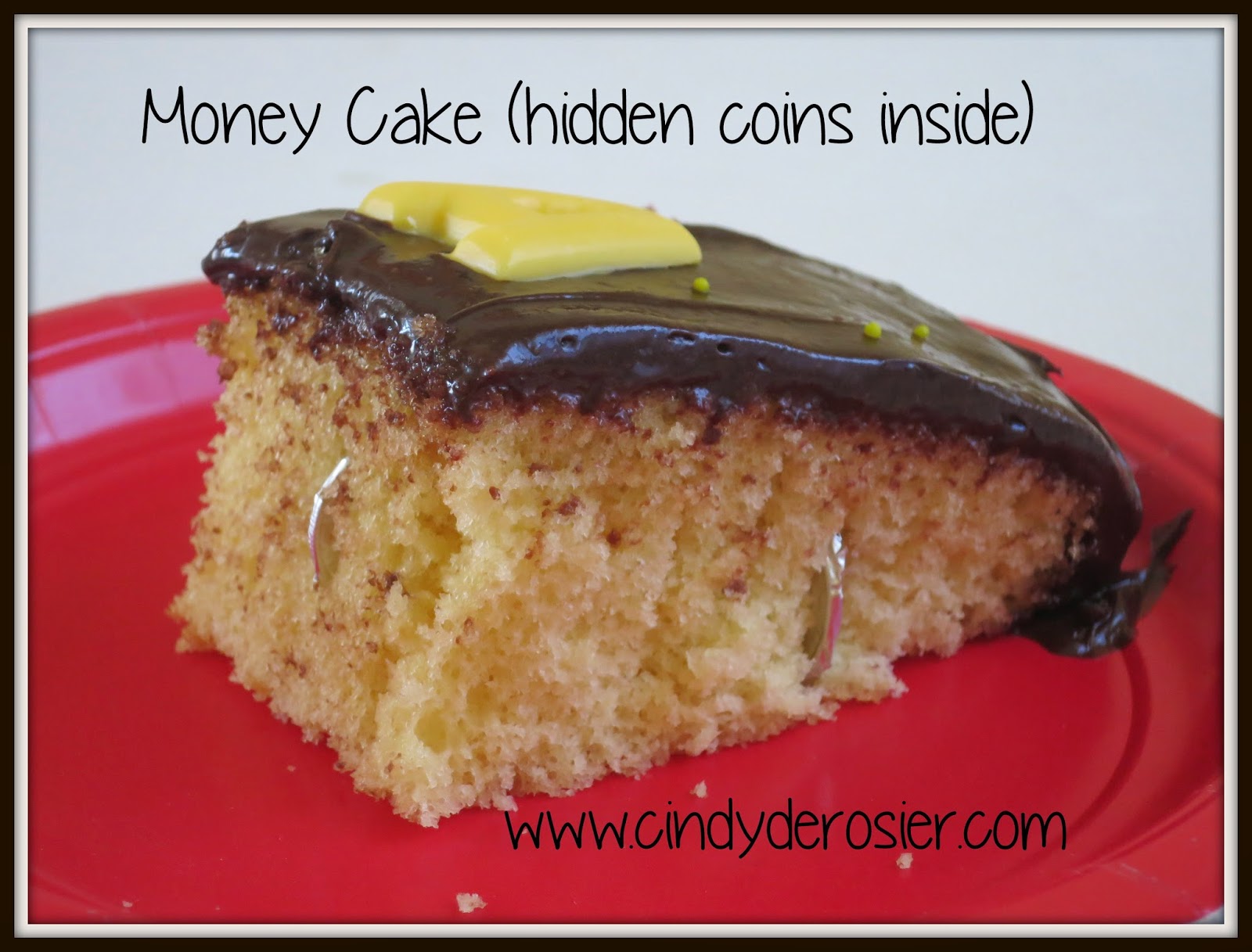 Have any of you ever had a Money Cake before?  Anybody going to make one in the future?  You should!  They're so much fun.
Email ThisBlogThis!Share to TwitterShare to FacebookShare to Pinterest
Labels: Cake, Parties, Recipes