Trevor and I have been working on a big project, inspired by Little Passports. Little Passports is a monthly kit about geography geared toward children 5-12. There is a USA Edition and a World Edition. Last Christmas, Trevor's Aunt Teri gave him a year's subscription to the USA Edition. Trevor was over the moon when he opened the first package. It came with all sorts of great introductory materials, including a map, field guide, disposable camera, and scratch art book. He dove right in and did all the activities.

He was so excited when the next month's kit arrived. And now, nine months later, he loves it as much as he did that first month. Each month, the kit focuses on two different states. Trevor gets an awesome activity-packed travel journal, stickers, postcards, and 3-D models to make.

I wrestled a freshly-opened kit away from him for 2 minutes to take a few pictures. Here you can see the travel journal (with the New Jersey side showing; Montana is on the other side), along with the stickers, postcards, and models for him to punch out and make. 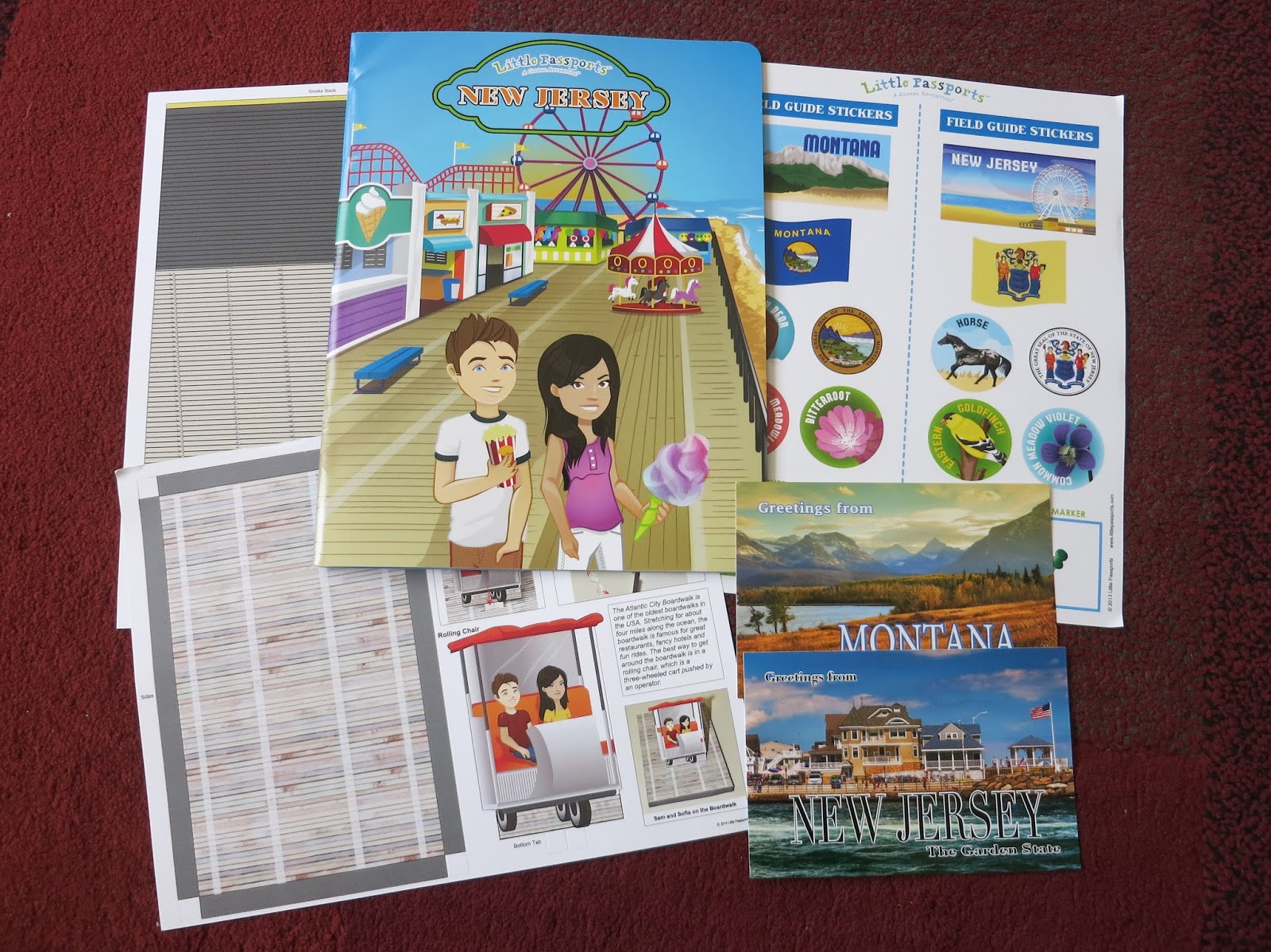 The travel journal is packed with information, puzzles, and activities about the state. This random page from the New Jersey journal has a science experience about Edison's phonograph (invented in West Orange, NJ) and a maze, inspired by the world's largest antique spoon collection (in Paterson, NJ). 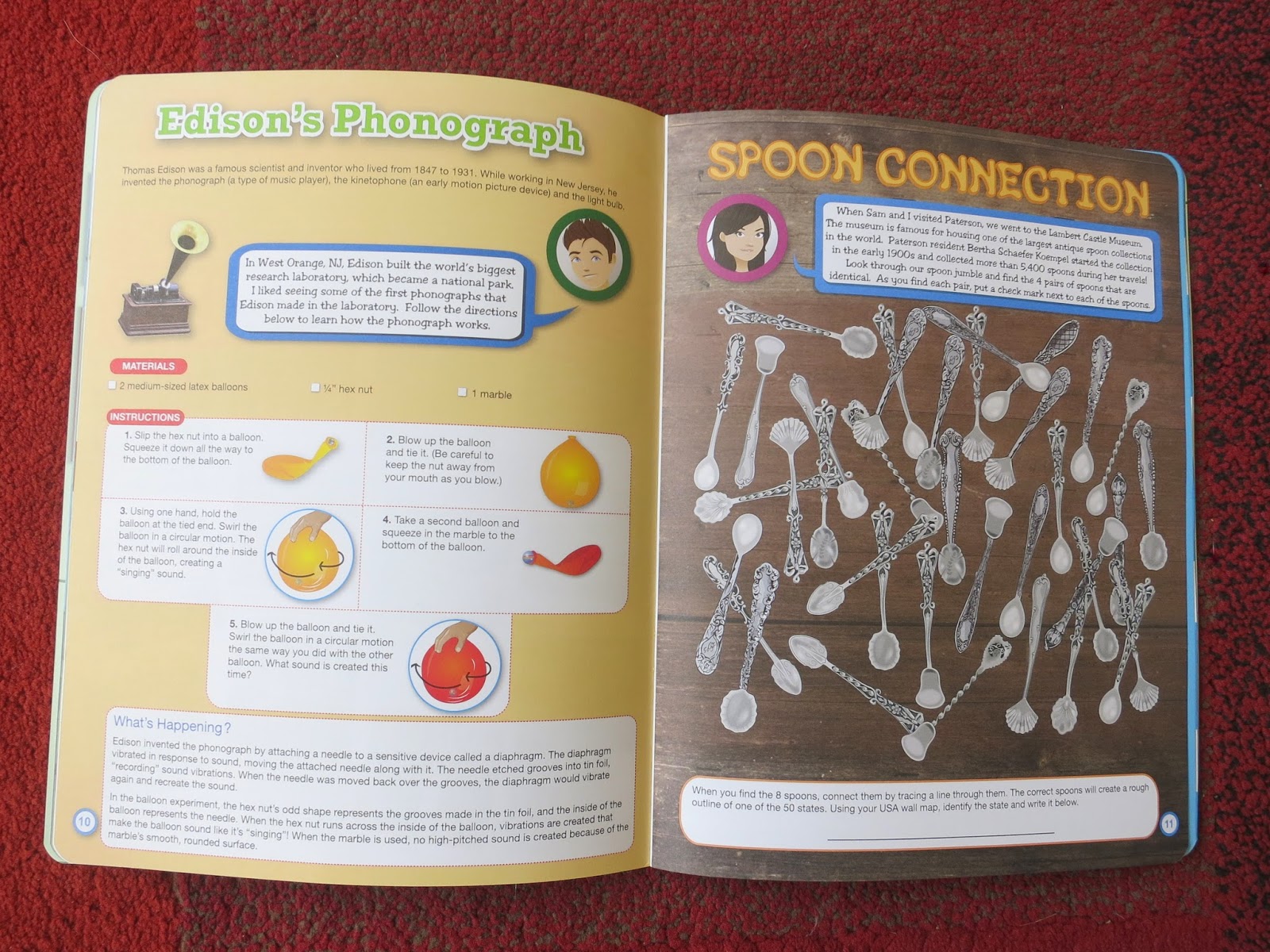 Here are two pages from the Montana portion of the travel journal. The left page is a puzzle based on the fact that Montana is home to more mammal species than any other state. The right page is based on Montana's nickname, The Treasure State. 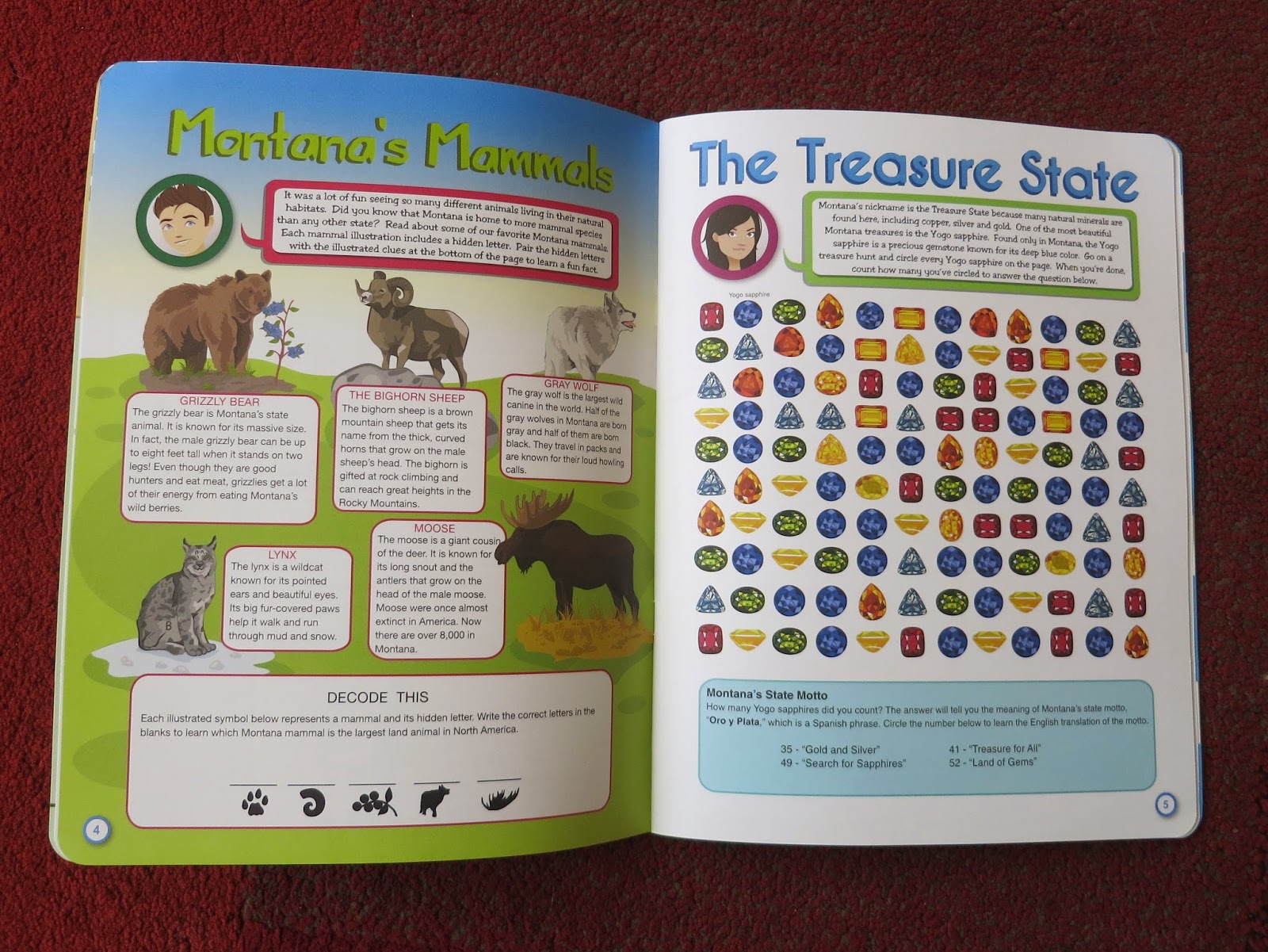 I have been impressed every single month with the quality of Little Passports. There is a lot of variety in the activities and it is really engaging and interesting. I would have LOVED this as a kid (heck, I LOVE it as an adult!) I'm hoping Aunt Teri renews Trevor's subscription this Christmas, but if she doesn't, we certainly will. It's really educational, a lot of fun, and a great way to make a gift last an entire year.

Now, on to the project I mentioned at the beginning of the post! Trevor has been collecting the postcards from the Little Passports kits and wanted a way to display them. We tossed a few ideas back and forth, did some window shopping at Scrapbook.com, and then came up with a fun concept. We would find a 3-up album with 25 pages (50 sides). We'd put the postcards in alphabetically as they arrive in the mail, then we'd find a photo of Trevor from the first time he visited that state and put it in the bottom slot. We'd fill in the middle with journaling about the photo. Trevor was so excited.

We bought the album and arranged the postcards he's received alphabetically. Then we went through my journal about Trevor to count up which states Trevor has visited. As it turns out, there are 7. He was born in California and has visited Alaska, Washington, Hawaii, Florida, Nevada, and Oregon, in that order. (Interestingly, he has been to more foreign countries than he has states!) I showed Trevor photos from each of those trips and he selected a favorite to print. I suggested to Trevor that I do the journaling from each of those states (as he was too young to remember much, if anything, now) and that he could do the journaling himself for any future states he visits. He thought that was a great idea.

Of the seven states he's visited, only Washington and Hawaii have been featured so far in his Little Passports packets, so those are the only totally complete pages. Here is Washington, which Trevor first visited at 18 months (his first time seeing snow) and Hawaii, which he visited for the first time at 2 years 8 months. 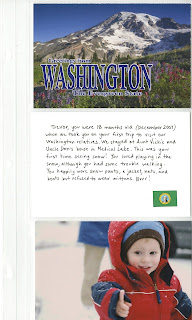 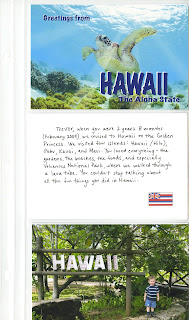 We are both thrilled with Trevor's 50 States Album and can't wait to fill in more pages as he continues his travels around the country (including 4 new states in the near future!). Thanks again to Aunt Teri for a totally awesome gift!