On the Hunt for Marsala at CHA

Ever since Pantone announced Marsala as the Color of the Year for 2015, I've been on the lookout to see if it would be as present in the crafting world as it apparently is in the fashion world. I say 'apparently' because my only connection to anything having to do with fashion is watching Project Runway once a week. (Which reminds me that we're long overdue for another deRosier Project Runway challenge...)

Anyway, when I was packing for the Craft and Hobby Association trade show, I decided that it would be great fun to wear my Marsala shirt one day and go booth-to-booth to see which manufacturers were showing Marsala products. I started at one end of the convention center and, over the course of six hours, worked my way to the opposite end, holding my shirt against products to see if I'd found a match. It was great fun (albeit exhausting) and the results were very interesting. But I'll get to that in a bit.

First, let's look at some of the products I found. There were exactly two exhibitors (out of 400+) who immediately recognized my shirt as Marsala and jumped up to show me their Marsala products. I wish I'd gotten the name of the wonderful woman from Weave Got Maille who showed me her Marsala manicure along with their Marsala jump rings! 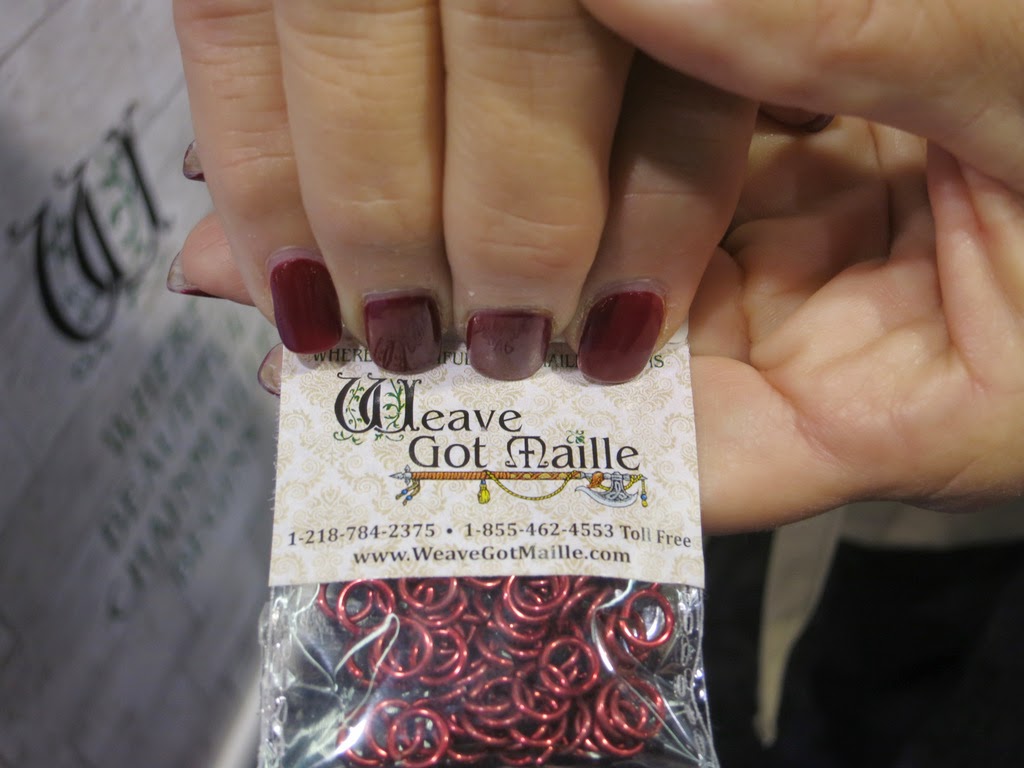 Angela Daniels was in the Rit Dye booth and showed me that not only were they displaying Marsala prominently, they had a "recipe" card to show how to make all the colors in the Spring 2015 Color Report using Rit Dyes. Fabulous! Angela sent me home with the dyes I need to make Marsala, so I can assure you that I'll be sporting some Marsala shoes hours after I get around to buying a pair of white Keds. 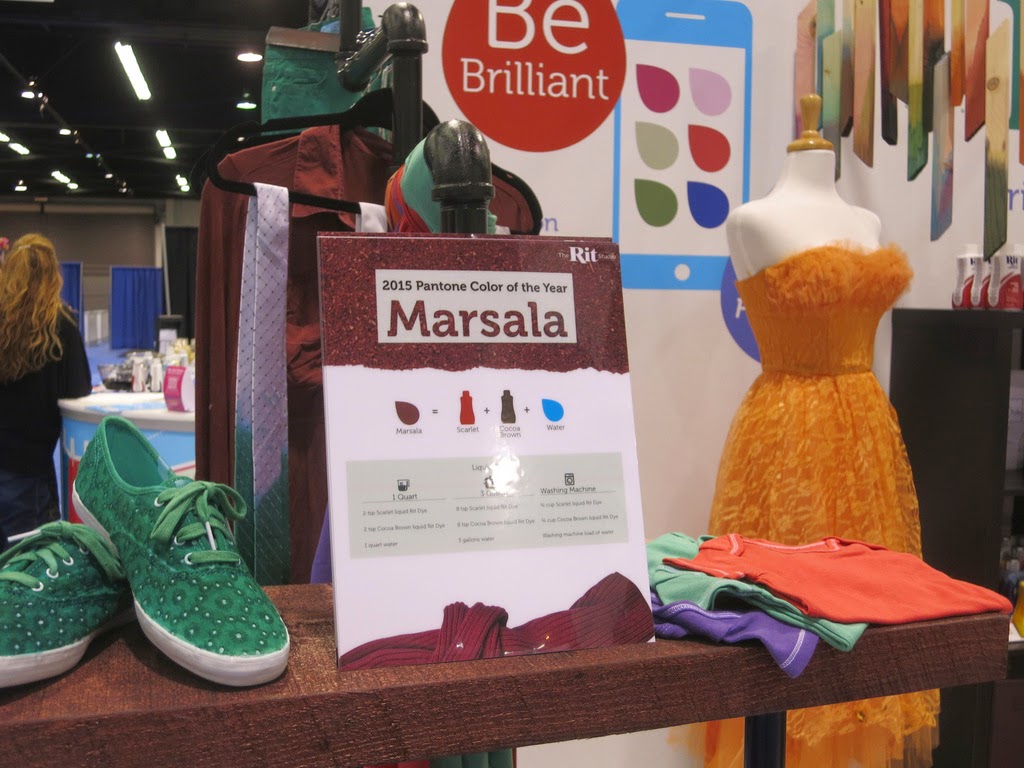 Other manufacturers didn't immediately recognize my Marsala shirt but were eager to help me find a match once I explained my project. I love this feathered fan from Feather Place! They also had gorgeous bleached and dyed peacock feathers that perfectly matched my shirt. 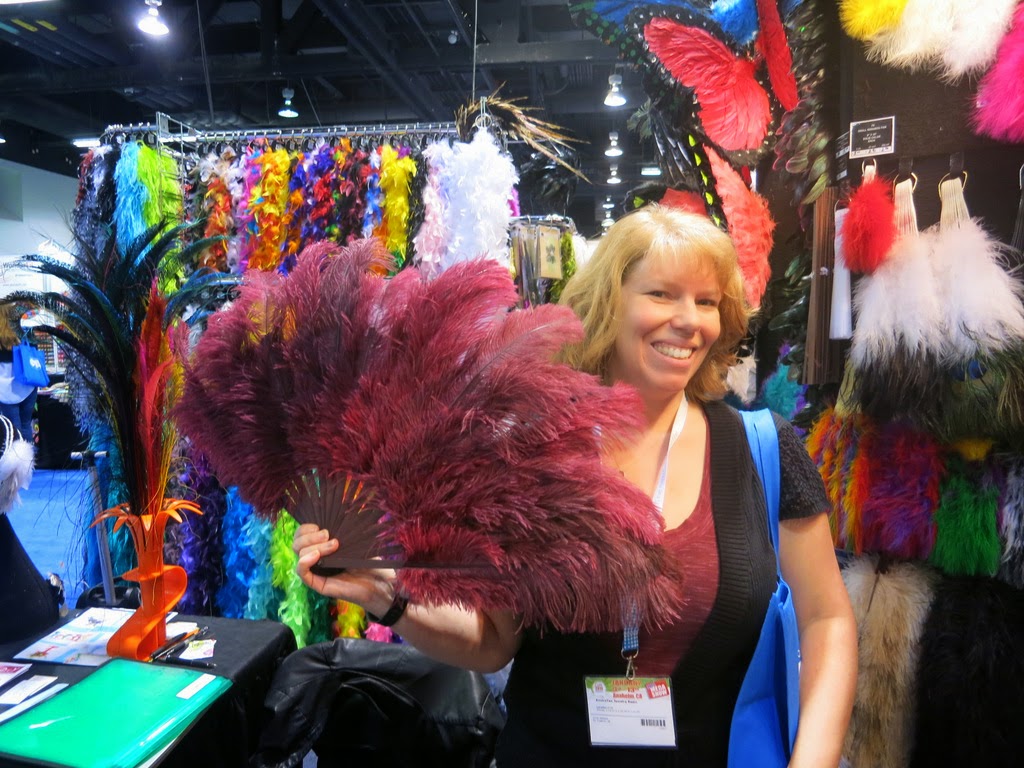 May Arts had more than one ribbon that was a perfect match! Wouldn't it make a much prettier badge lanyard than the one I'm wearing? (Note to self: Make attractive lanyard featuring the Color of the Year for 2016's CHA Mega Show.) 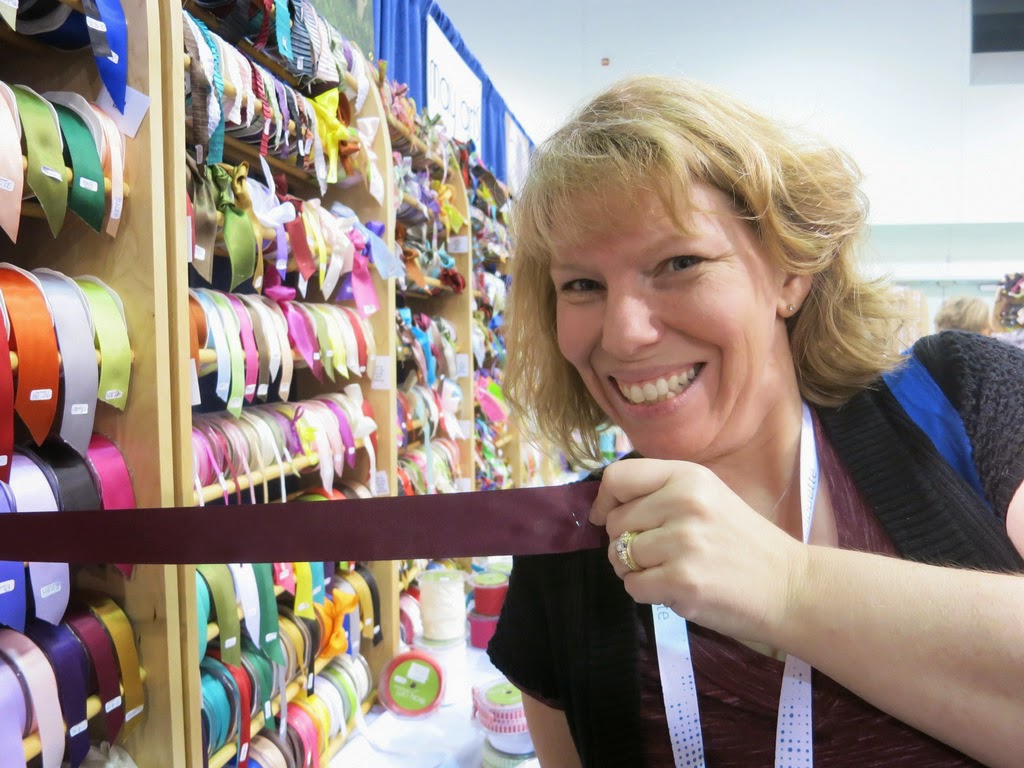 I'd love a bracelet made from these gorgeous beads from F2B Wholesale! 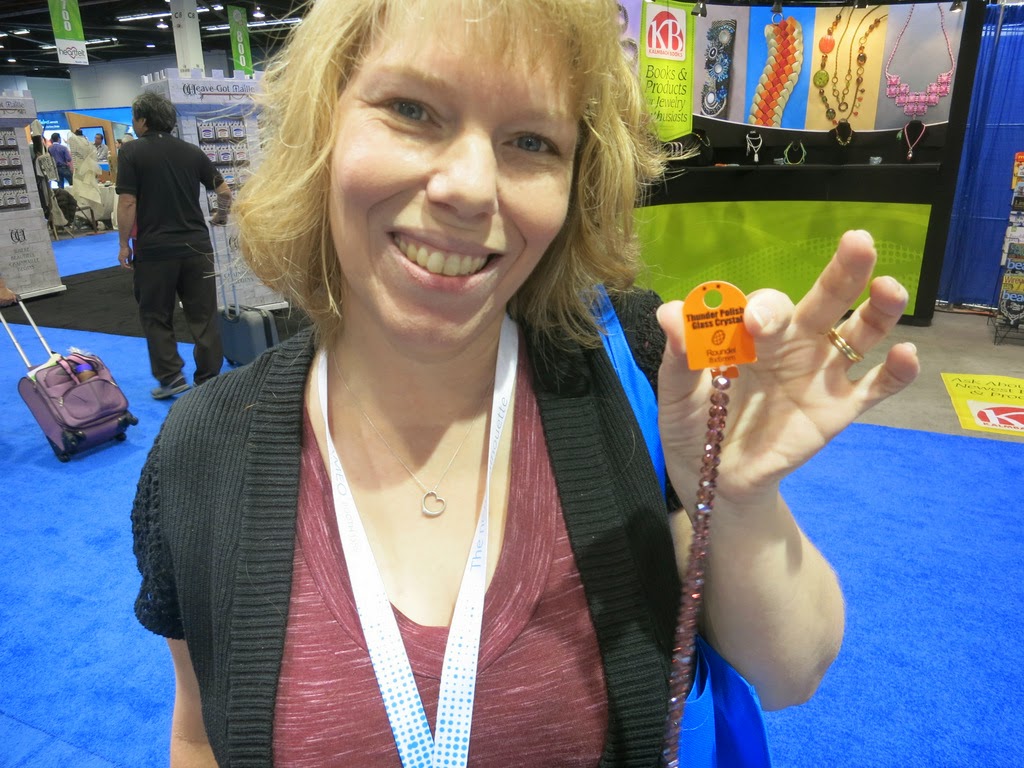 And maybe some earrings with these beauties from Cultured Sea Glass? Yes, please! 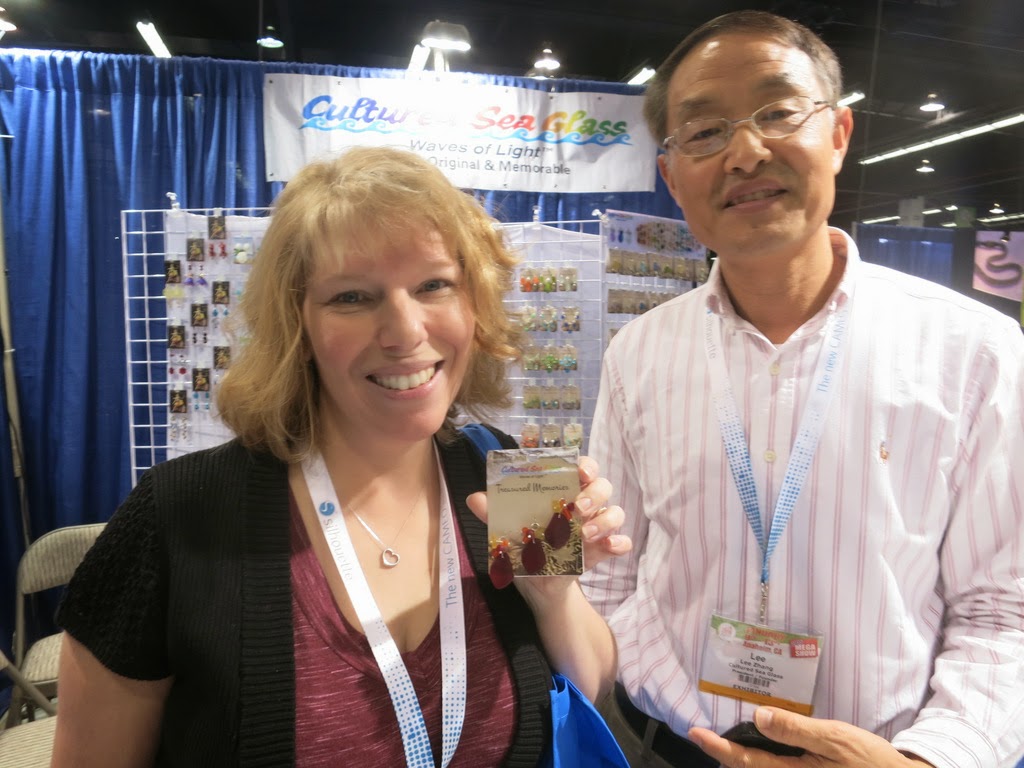 My friend Tami Bayer was in the Ice Resin booth when I stopped by. She gave me a demonstration using their German Glass Glitter. So pretty! 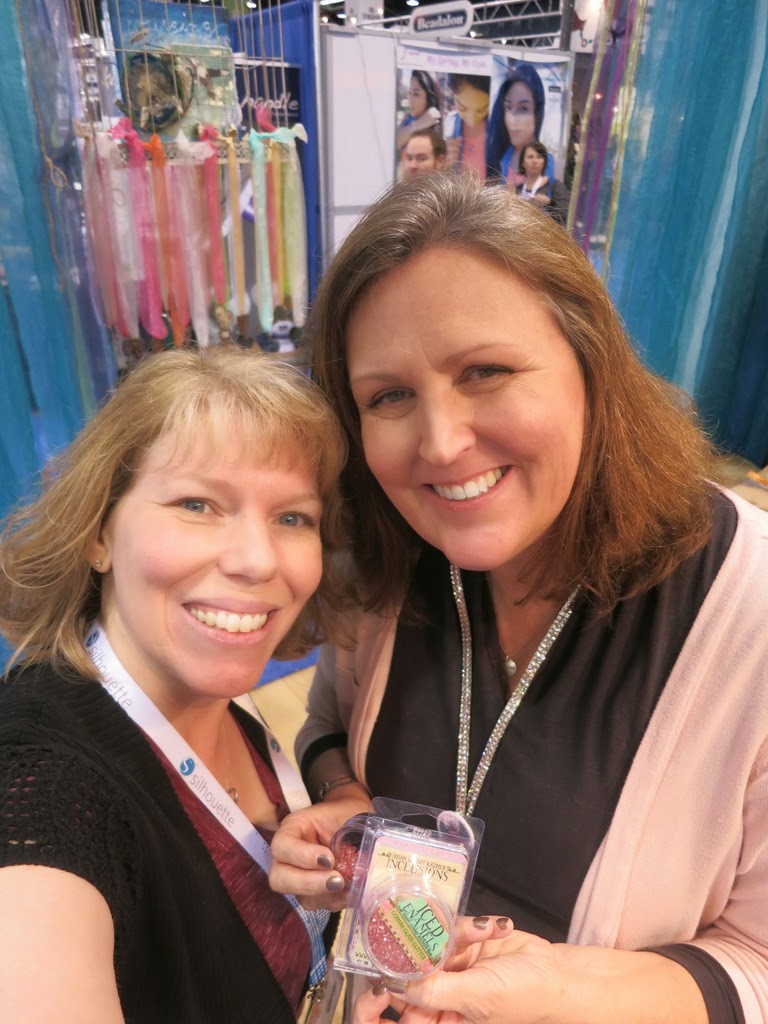 I had a funny experience at the Sulky booth. I explained to the gentleman working there that I was on a quest to find manufacturers displaying products featuring Marsala, the Color of the Year. I pointed to my shirt. He nodded and asked what I wanted to do to my shirt. I tried to clarify that I was not doing anything to my shirt except trying to find products that matched it. We went back and forth about ten times with him asking if I wanted to hem it, or embroider on it, or add a trim, etc. while I tried (unsuccessfully) to tell him that I didn't have a purpose other than to see if there was something that matched my shirt. Poor guy! I guess my request was actually pretty weird when you think about it. He ended up giving me this thread and a hibiscus print. Maybe I'll need to embroider on my shirt after all! 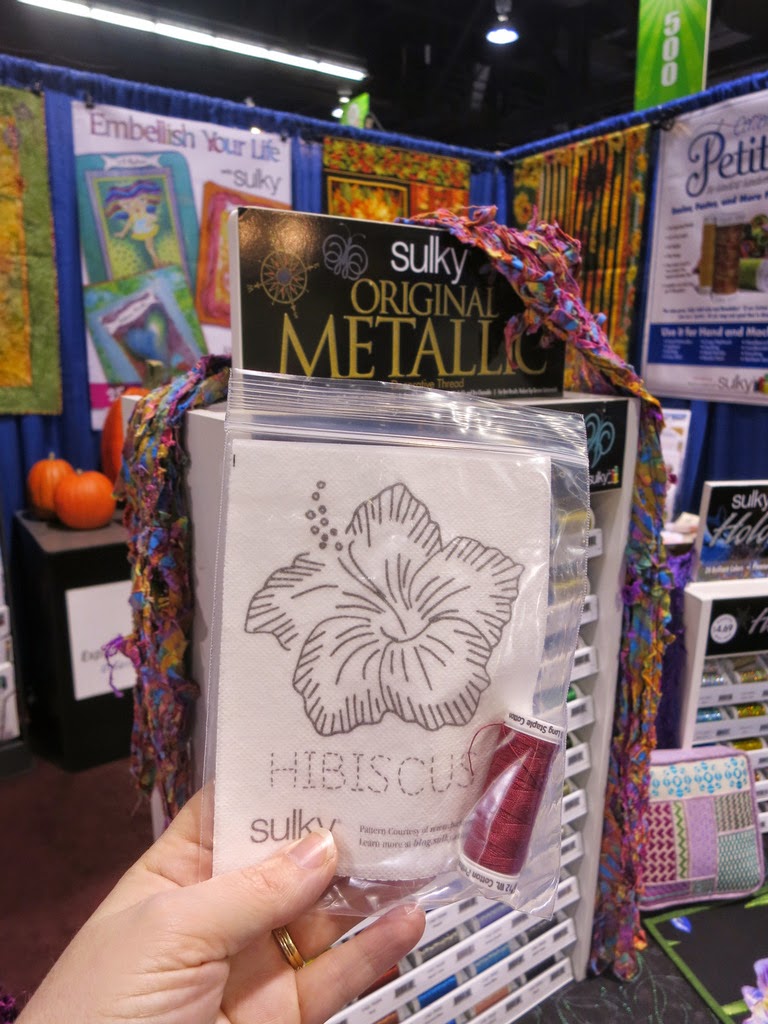 The fine folks at ParaWire also gave me a souvenir to take home. Now I definitely have to make a Marsala bracelet! 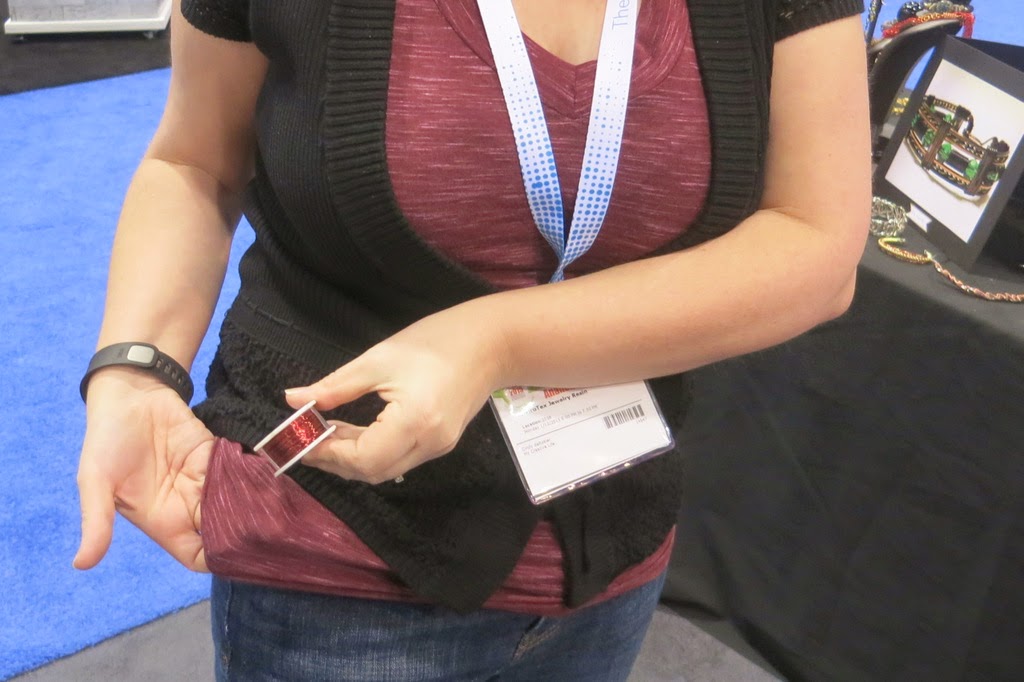 Hemptique's Crafter's Cord was another perfect match! Maybe I should use the ParaWire for earrings and the hemp cord for a bracelet.... 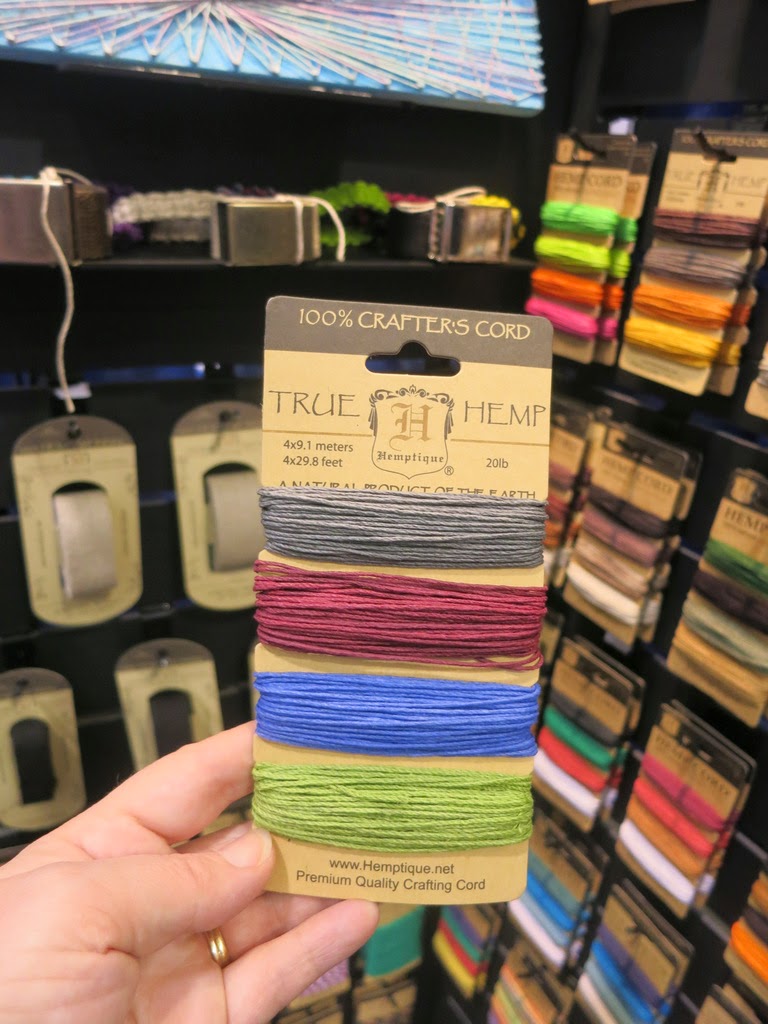 This shade of Memento Luxe is a perfect match for Marsala. It's called Rhubarb Stalk. Awesome! I'm totally obsessed with rhubarb! 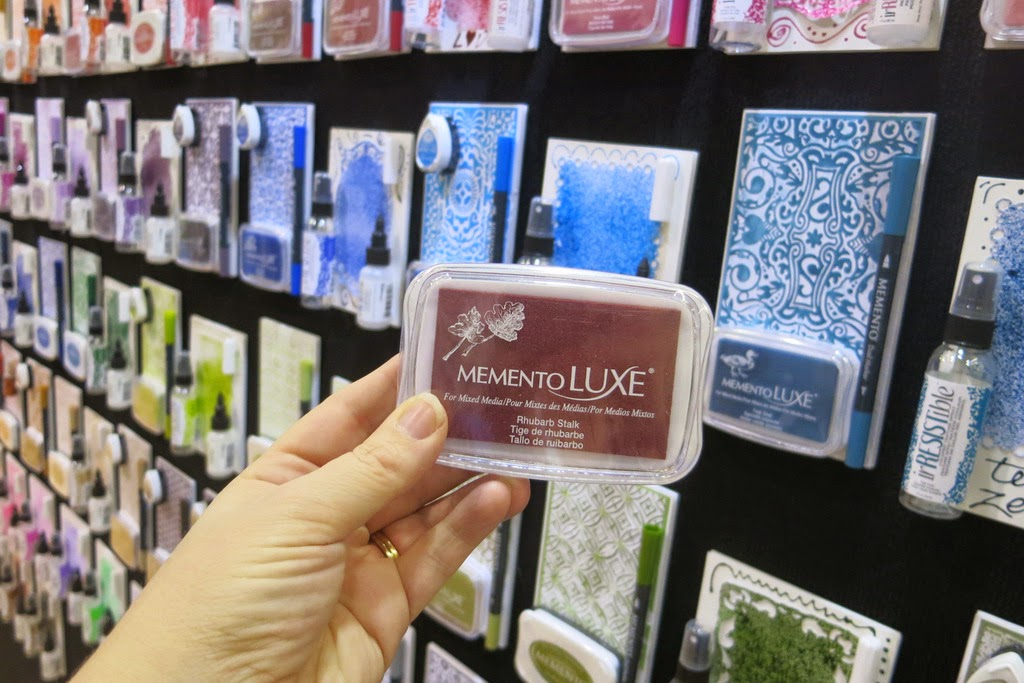 Before you answer, I should clarify that I did visit every booth, but if there was another customer there, I did not interrupt and moved along after a brief glance on my own. I didn't take a photo if it would have been disruptive, nor did I take a business card. There were definitely other manufacturers with beads, threads, paints, markers and inks in shades similar to Marsala.

Back to the question. What do the items I found have in common? Almost without exception, you either wear them or use them to create jewelry to wear.

So what's missing? Paper. I didn't find a single paper manufacturer that had Marsala in their color scheme. There were some hints of burgundies and other reds, but not a true Marsala. Yes, companies like Bazzill that make every shade of hundreds of shades of cardstock did have a decent Marsala-equivalent. And yes, I found some albums that were close enough to Marsala (like these from We R Memory Keepers). 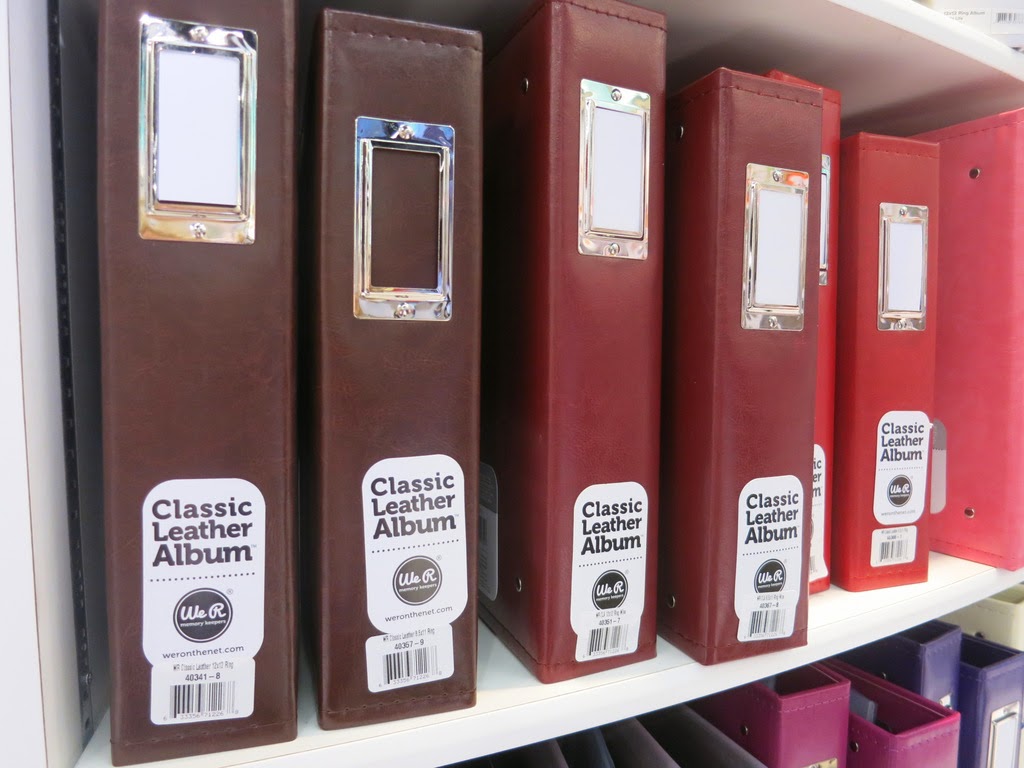 But I didn't find Marsala patterned paper. It's definitely possible that it was there and I didn't notice it. After six hours, I wasn't exactly seeing straight. It's also possible that one of the companies who didn't attend CHA has a new line with Marsala. But I can say with certainty that Marsala is not a papercrafting trend for 2015.

Besides paper, what else is missing? Kids' craft supplies. This isn't surprising. Products for kids tend toward the colors of the rainbow, pastels, and neons. A blood-red color named after a wine doesn't exactly say 'child.'

Huge thanks to all the exhibitors at CHA who took the time to indulge my silly hunt for Marsala, regardless of whether or not you had any represented in your booth. I appreciate all those who helped me search, took my picture, and/or gave me samples. You're the best! See you next year, when I'll be sporting a different color of shirt....
Email ThisBlogThis!Share to TwitterShare to FacebookShare to Pinterest
Labels: CHA 2015