This was my second time attending the Craft and Hobby Association trade show, so I should have had a pretty easy time figuring out what to bring and how to prepare. But the circumstances were so totally different that it may as well have been my first time.


2011:
CHA was held at the Los Angeles Convention Center. I flew south alone (with one small checked bag and a rolling backpack), my friend Amanda picked me up at the airport, and we stayed 30 minutes away from the venue in Pasadena with a friend of hers. I had a buyer's badge and how I spent my time was based entirely on what the store needed/wanted me to do. I took several hands-on classes, but had almost no time for make-and-takes or much else on the show floor. I used the store's business cards and didn't even have my own. I wasn't blogging yet (but the decision to start was made during this show) and didn't even follow a lot of blogs. I didn't use (or really understand) any social media besides Facebook.

2015:
CHA was held at the Anaheim Convention Center. Steve, Trevor and I drove instead of flying. I seriously overpacked, as there was no concern about airplane limitations. We stayed at the Hilton, steps away from the Convention Center. I had a Creative Professional badge and was attending on my own qualifications. I spent my time doing exactly what I felt like doing at any given moment. I handed out hundreds of my own business card. I took only one hands-on class, but did dozens of make-and-takes on the show floor. I blogged (once) from the show floor and posted to both Instagram and Facebook.


See? Totally different. About a week before it was time to go, I started making my packing list. The basics were easy (pajamas, medicines, toiletries, paperwork, Mouse ears for an evening at Disneyland, that sort of thing) but the rest was more of a challenge. I vaguely remembered an article May Flaum had written for Scrapbook Update that I used to help prepare for 2011 and went searching. I finally found it: May's Top Tips for Making the Most of CHA. It was just as helpful earlier this year as it was in 2011.

May's tips are excellent and I expect I'll be referring to them again next year! But I do want to add a few tips of my own (or variations on hers).

You don't want to turn down make-and-takes or samples because you have no way to carry them, nor do you want to be in pain from lugging around 30 pounds of stuff from 9:00 am - 5:00 pm. This is my rolling bag: 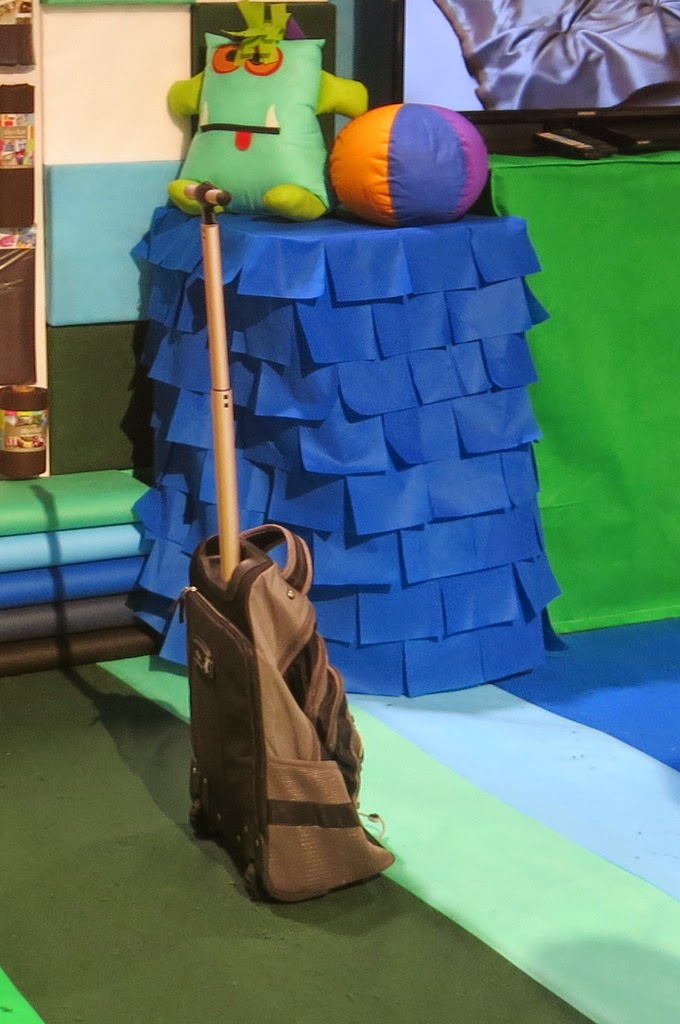 I love it. It's just wide enough for 12" x 12" paper and has lots of pockets for snacks, a water bottle, Advil, chapstick, Kleenex, business cards, and everything else I need. I kept a folded tote in my rolling bag so that I had even more storage once I became too loaded down. I also keep a 12" x 12" plastic envelope with a piece of 12" x 12" chipboard inside so that any paper samples I get or layout make-and-takes aren't ruined.

By the way, rolling bags aren't allowed on the escalators. My bag has straps so I can wear it like a backpack and use the escalators. It also has a handle on top. A lot of times I just carried it up and down the stairs. 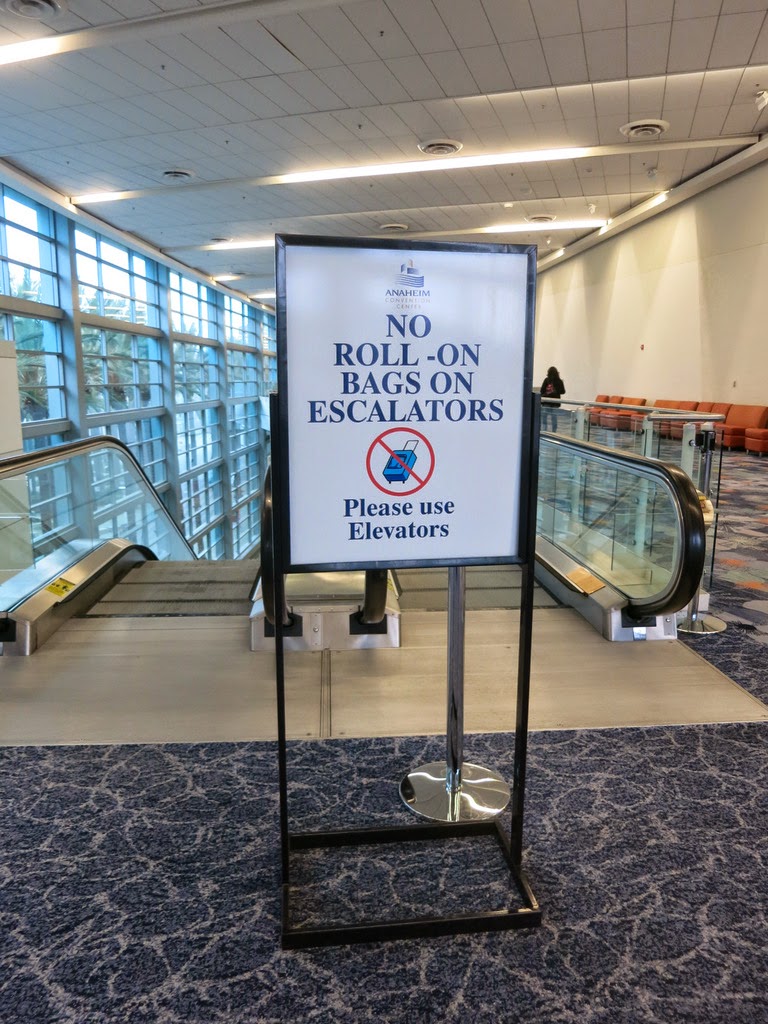 Speaking of stairs, you're going to be doing A LOT of walking, even if you always use the elevator or escalator. Which brings me to my next tip:

*Dress nicely on top and comfortably on the bottom.

Every day, I walked at least 5 miles and as many as 10 miles. And I was staying at the closest hotel! Comfortable shoes are not an option; they are a must. In looking at photos from 2011, I realized that there were virtually no full-body pictures of me. Almost every photo I was in was from the waist up.

I decided that for 2015 I'd adopt a simple 'uniform' of a colorful blouse, black sweater and interesting jewelry (the "nicely on top" part of the equation) with dark jeans and super comfy black boots (the "comfortably on the bottom" part). It ended up being a great decision. I was comfortable in my boots, my jeans made it convenient to keep business cards in my back pockets (one side for cards to give and one for cards I received), and I looked relatively put-together in photos. The majority of attendees were dressed in nearly the same way. 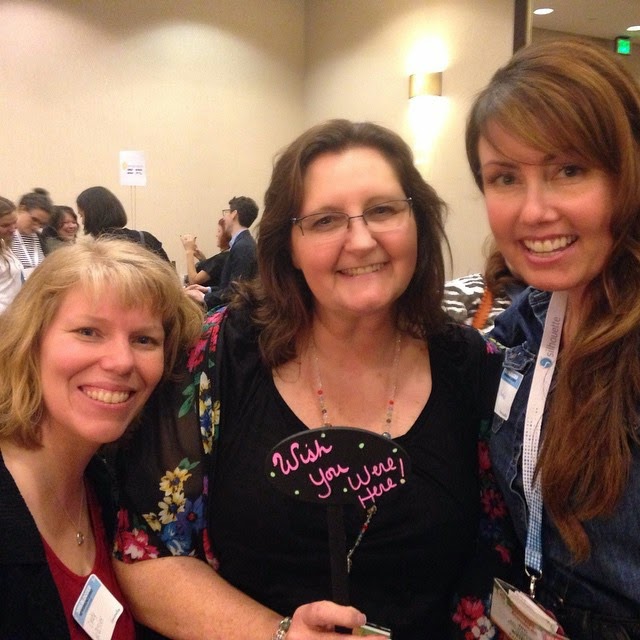 I'm an introvert. I get that "talk to everyone" is not easy for some people and is completely exhausting. But do it anyway. Say hi to people in elevators. Introduce yourself and exchange business cards with the people in the classes you take. Chat during make-and-takes or while waiting for the show floor to open in the morning.

On the first night, I went alone to the Mega Block Party. I sat down at a table and introduced myself to the lone woman sitting there. She was waiting for friends. Long story short, we had a nice chat, and she introduced me to her friends when they showed up (members of the Executive Committee of the Society of Decorative Painters)... including one who had lived in my hometown after I'd moved away and used to bowl in a church league with my dad, sister and brother-in-law! 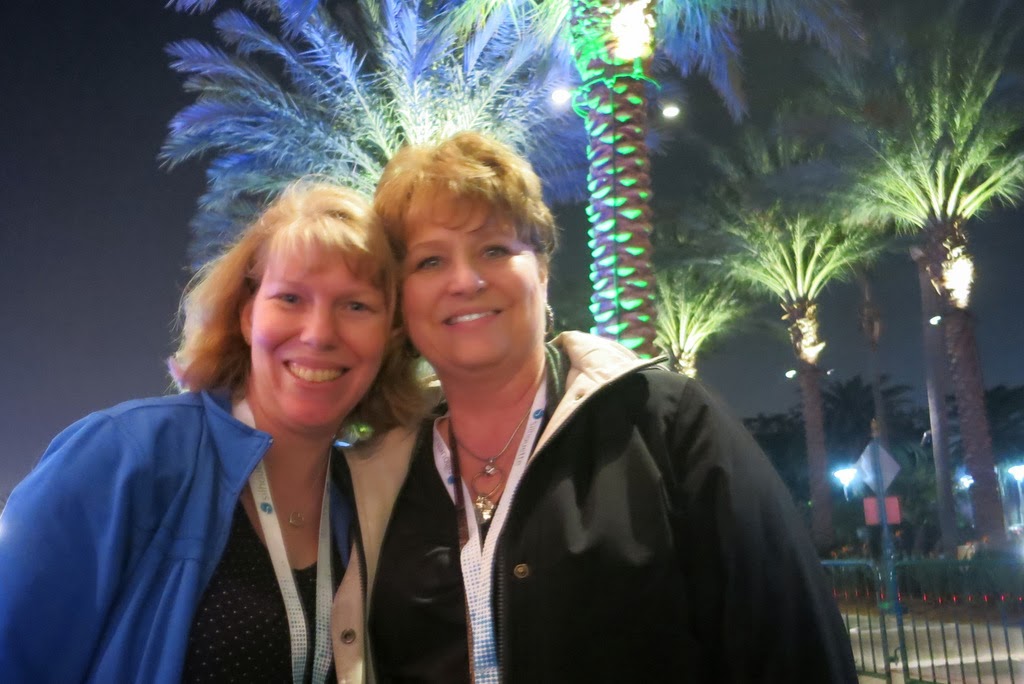 *If you have a choice between driving and flying, choose driving.

Obviously, a great many attendees have to fly to get to CHA. But for those of us for whom driving is possible, I'd recommend it. It takes us between 7 and 8 hours to drive, which is longer than it would take to fly, even counting the drives to and from the airport, security, etc. But it is well-worth it to be able to pack home as much stuff as you want. I was able to do all the make-and-takes I wanted without concern about how things would fit in my suitcase. I was able to accept all sorts of samples that were bulky, prone to leaking, or otherwise unsuitable for air travel. I took all the literature people gave me with no concern about paying extra for the weight.


*Know your technology ahead of time.

Let's say (hypothetically speaking, of course) that you are the last person you know to get texting on your phone, in fact just two days before CHA, and your boss will be texting you to get together during CHA and you need to know not only how to get the text but how to respond. Well, if you find yourself in this situation (not that I know ANYTHING about this...) I strongly recommend figuring out how texting works before CHA, not during. And again, hypothetically, if you want to tag a friend in an Instagram post when you visit the Doodlebug booth, but you've never actually tagged anyone in Instagram and don't know for sure that it's even possible, the Doodlebug booth is not the best place to stand for 15 minutes trying to figure this out....


*Take notes about everything. Everything.

Do not fall into the trap of thinking that you'll remember everyone you met, everything you saw, and everything you did. You won't. You'll remember bits and pieces, which may or may not get jumbled into a big confusing mess and you may find yourself googling like crazy to try to figure out which manufacturer displayed that adorable bunny (again, hypothetically....) when if you'd just taken notes in the first place, you could have saved yourself a lot of time and trouble.


*Have the time of your life.

CHA is amazing. There is something magical about being surrounded by thousands of people who share your passion and who get you. Seeing the products, learning, experiencing... it's like nothing else. Enjoy it. Live in the moment, say yes to opportunities, and be open to possibilities.
Posted by Cindy deRosier at 5:00 AM

Email ThisBlogThis!Share to TwitterShare to FacebookShare to Pinterest
Labels: CHA 2015