The Verdict Is In... We LOVE Twisteezwire!

Before leaving for the Craft and Hobby Association trade show, I looked up all of the nominees for the 2015 Hot Products Award. I was most interested in the kids' crafts category. My pick for the winner (and Trevor's pick also) was the Twisteezwire Mask Kit. It looked so fun, equally appropriate and interesting for boys and girls, with tons of room for creativity. You can see a video about it here. 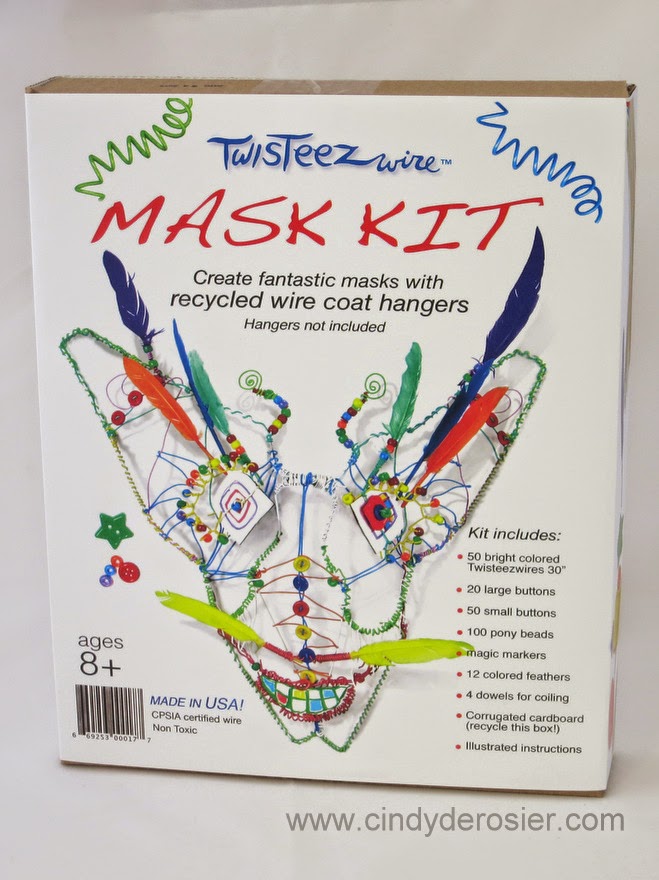 On Saturday night when I returned to the hotel room after opening day on the CHA show floor, the first thing Trevor said was, "Did you get to see the Twisteezwire Mask Kit? Did it win?" I reminded him that the awards would be announced Sunday night (while I'd be at Disneyland with him) and that I wouldn't find out until Monday morning. On Sunday night, there were at least ten times that Trevor said something to the effect of, "I really hope the Twisteezwire Mask Kit wins! Can you get one for me when we get home?" That really says something if a kid who is at Disneyland is thinking about a craft project he wants to do at home!

As soon as the show floor opened on Monday morning, I zipped over to find out the winners of the Hot Products Awards. The Twisteezwire Mask Kit was a runner-up, but did not win. I was surprised how disappointed I was! I'd never used it and had only first learned about it four days earlier, but I was already 100% convinced that it was one of the coolest things to hit the kids' craft market in awhile.

I went to the Twisteezwire booth to tell the exhibitor how disappointed both my son and I were that their mask kit did not win 1st place. We chatted a bit and after a little while, she asked how old my son was. I told her he was 8. She then did something I absolutely did not expect - she handed me a Mask Kit and said it was for him if I promised to review it on my blog.

As you've probably noticed, I don't accept a lot of free products to review here. Most of the products I review are things I bought and loved and know that my readers would love too. I would feel terrible if I accepted something for free with a promise to review it and it was awful. Obviously, I would never say nice things about a product just because someone gave it to me, so I am very careful with what I promise. I'd done my research about the Twisteezwire Mask Kit and I knew I would love it. Trevor knew he would love it. I was completely confident that there was no chance my review would be less than glowing, so I accepted it.

I snapped a few photos of some other Twisteezwire projects before leaving. Check out these cool glasses! 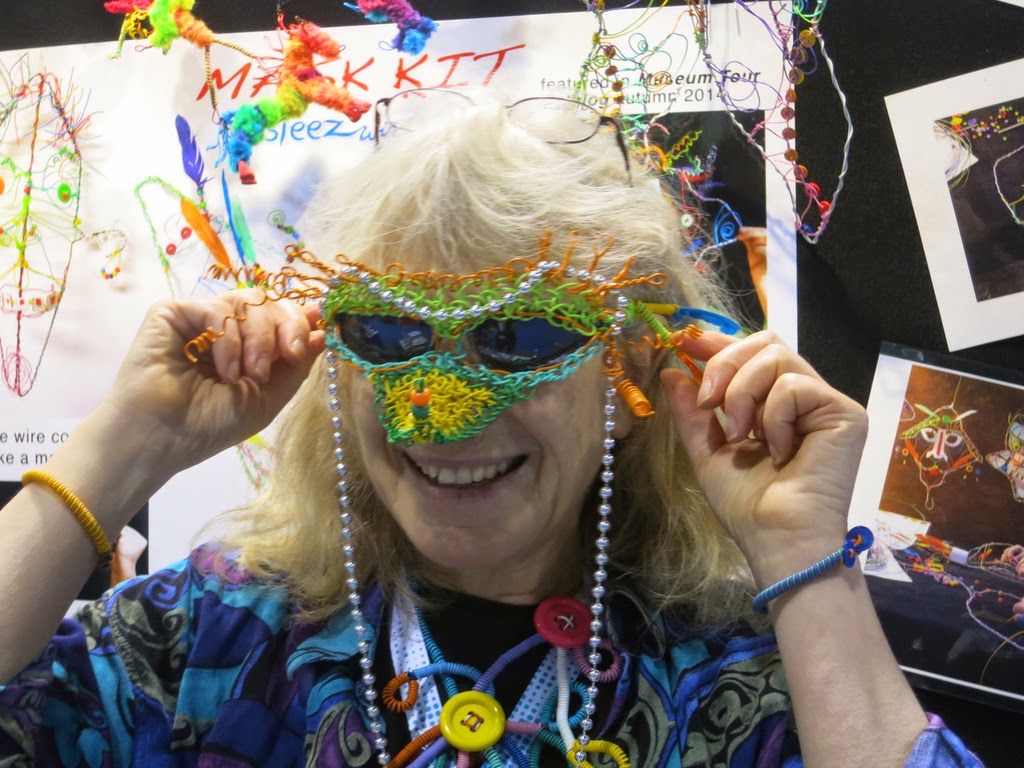 I love the birthday cake. And the snowman! 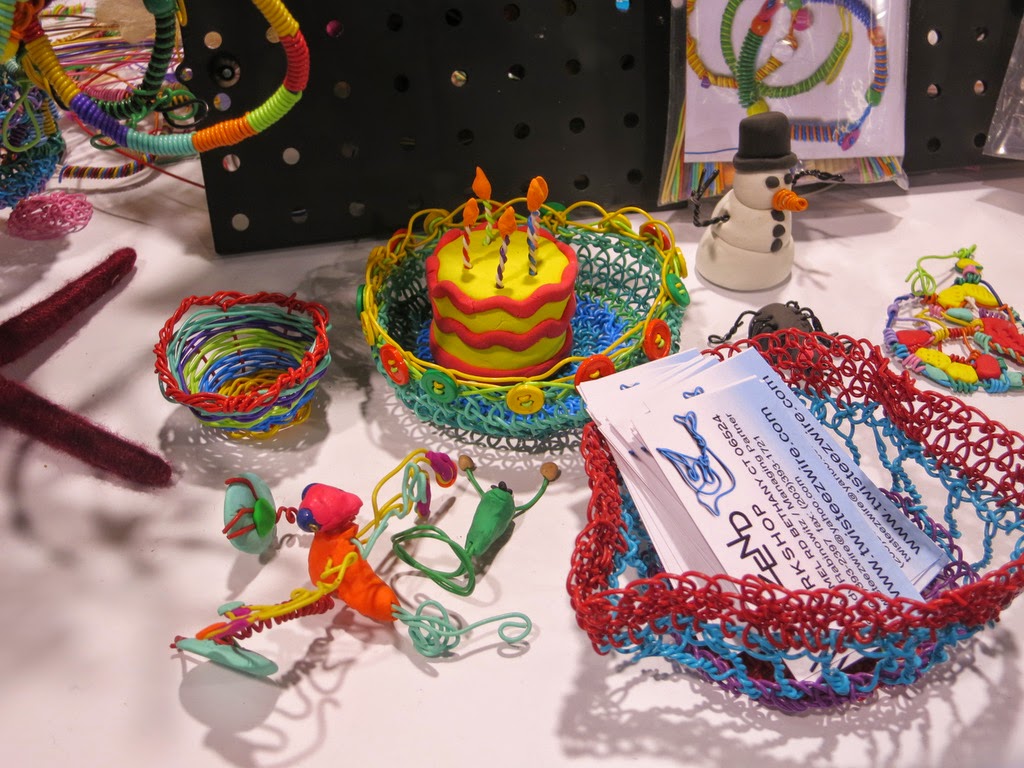 These baskets are incredible! 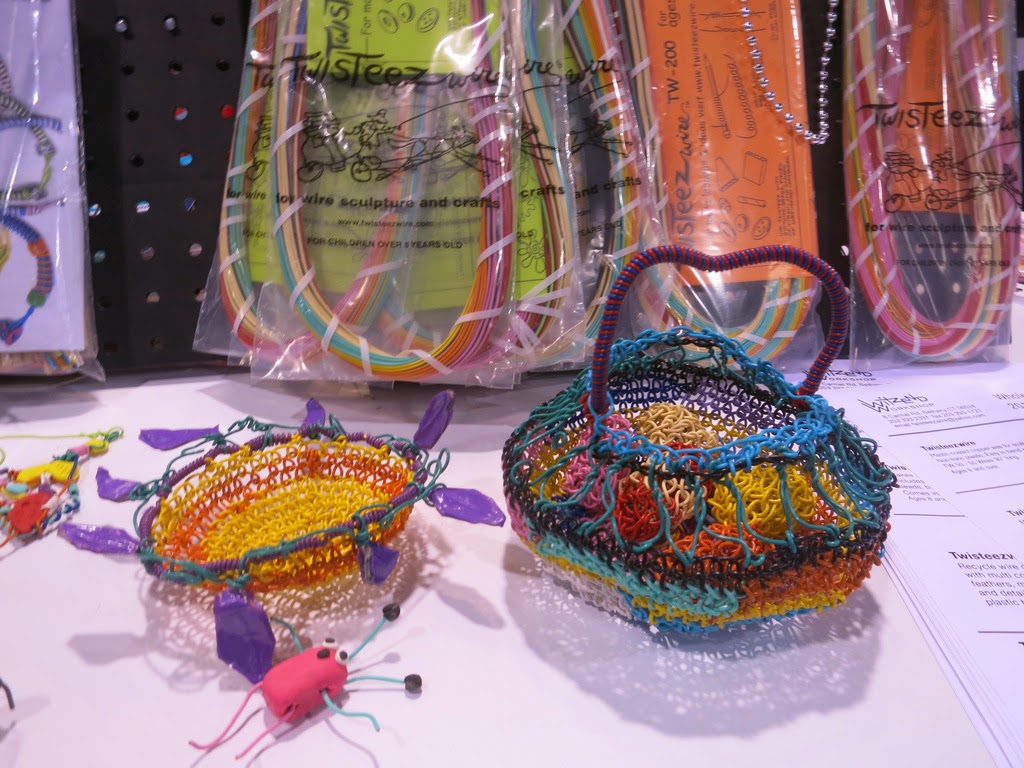 I got back to the hotel room on Monday night before Steve and Trevor did. I hid the Mask Kit, waiting for them to return, certain that Trevor would ask if it won. Sure enough, it was the first thing he asked when he came through the door! I told him it did not and he was so disappointed. But his disappointment turned to euphoria when I pulled out the kit and handed it to him! He wanted to play with it then and there in the hotel room, at 9:00 pm, the night before we were leaving. Um, no. He wanted to play with it in the car on the drive home. Also no.

After we got home, out of vacation mode, and back into our routine, I invited my 8 year old goddaughter Kylinn over to try the Mask Kit with Trevor. Before school was out, I opened the kit and took photographs of the contents. It includes a detailed instruction book, fifty 30" Twisteezwires, buttons, beads, feathers, markers, and dowels. Plus, the box itself becomes one of the supplies! You supply your own coat hangers and scissors. That's all you need. 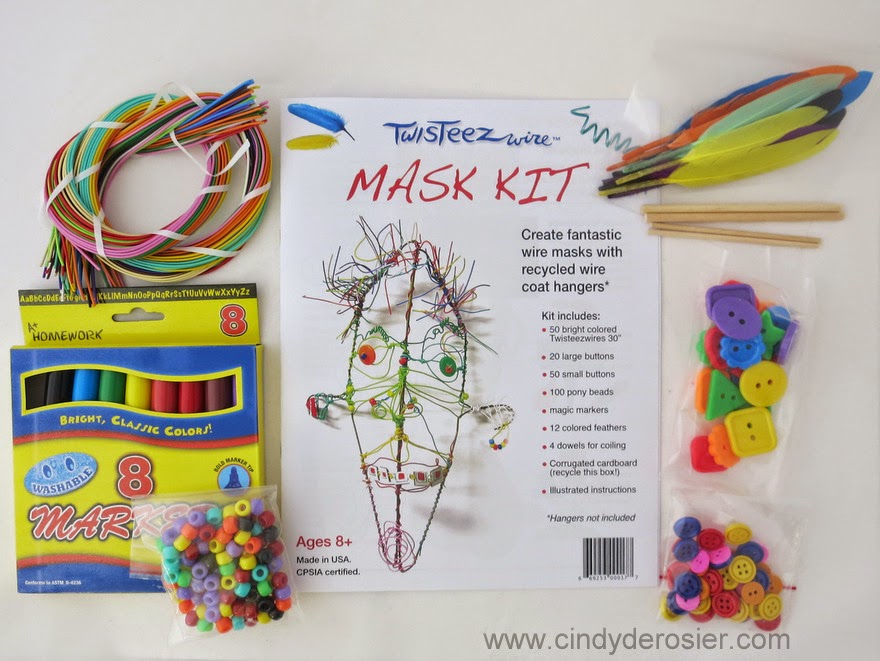 When I picked Trevor up from school, he was so excited he could hardly stand it. He was DYING to play with the Mask Kit. As soon as Kylinn arrived, I sat them both down and explained that they had a very important job: to play with the kit and let me know their honest opinions about it. I handed them the instruction booklet, which they studied carefully. 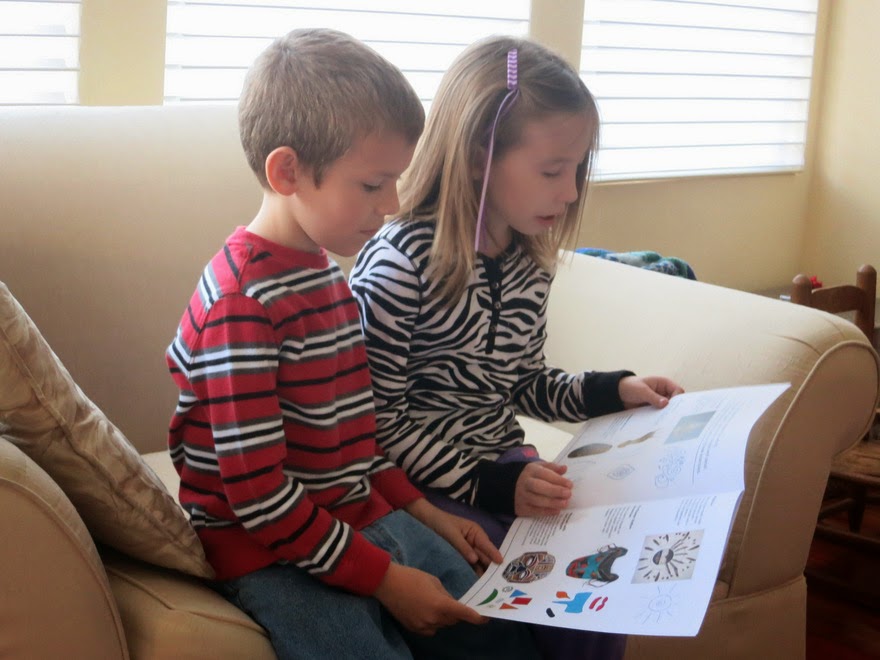 Kylinn's wearing the ribbon barrettes I made for her! Tutorial here.


They were so intent on studying the instruction booklet that they didn't notice me taking their photos until the second-to-last page! 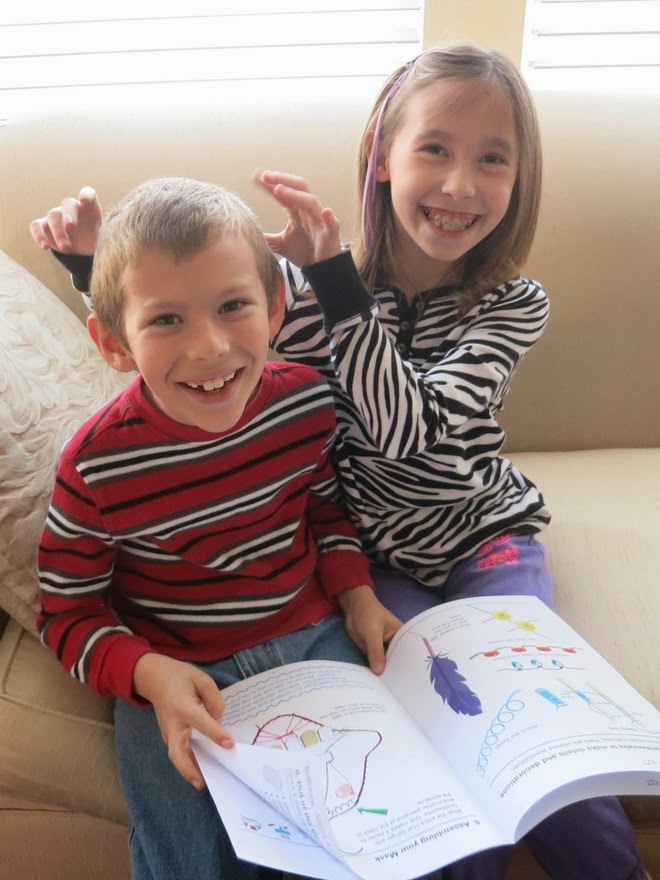 I put all the supplies on the kitchen table and they got right to work. I took this one photo of them getting started before I went upstairs to leave them alone. I really wanted to see what they would make on their own and whether the kit was truly appropriate for kids as young as 8. 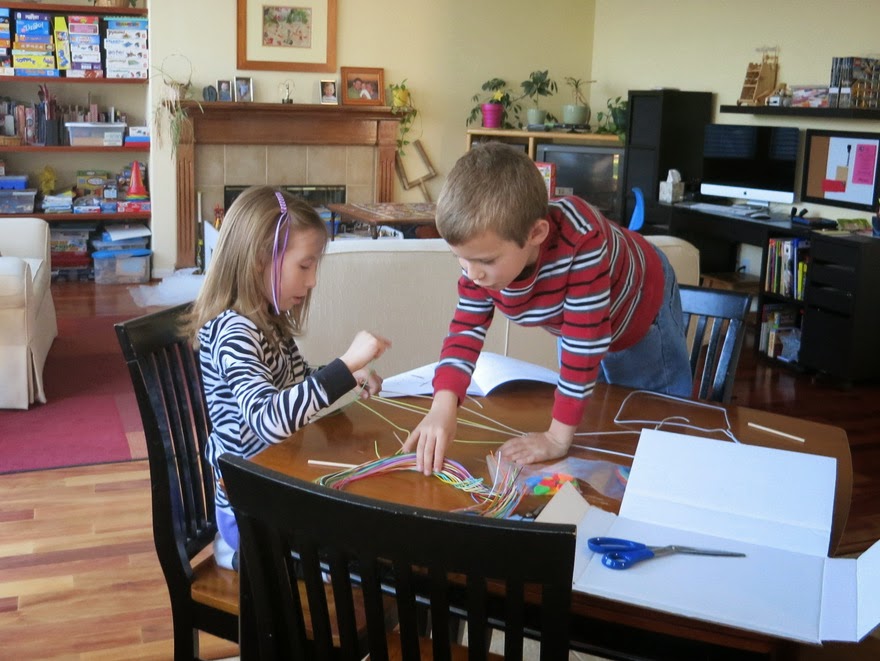 I could hear the kids chatting and giggling as they worked. They worked for exactly 90 minutes before they came and got me, both wearing their masks with the biggest smiles you've ever seen. I had them go outside where the light was better so I could take their photo. Kylinn proudly showed off her zebra mask. Trevor was equally proud of his rabbit mask. 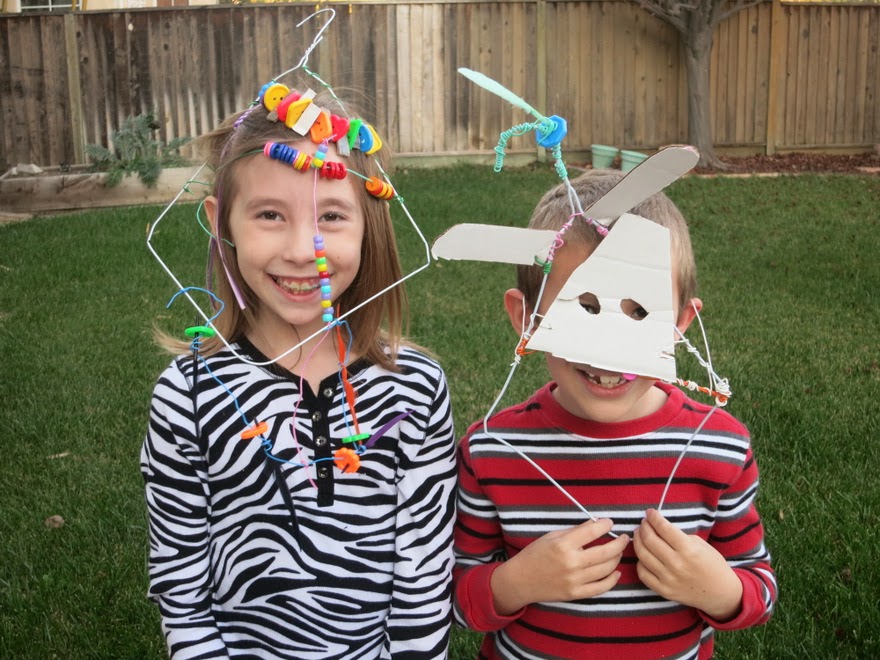 Both kids said that the kit was AWESOME! They said it was great for 8 year olds - not too easy and not too hard. They liked the way the box was one of the supplies. They thought it was really fun and that other kids would love it too. So there you go! The verdict is in... we LOVE the Twisteezwire Mask Kit!

It's really unusual that I don't do a craft alongside Trevor. I really wanted to make a mask, but I thought it was important to see what 8 year olds would make on their own without being influenced by something an adult made. While the kids ran around out back playing Zebra and Rabbit, I went back inside to clean up. I was delighted to see that there were still a lot of supplies left. Plenty for me to make my own mask the next time Trevor wants to play with the kit! 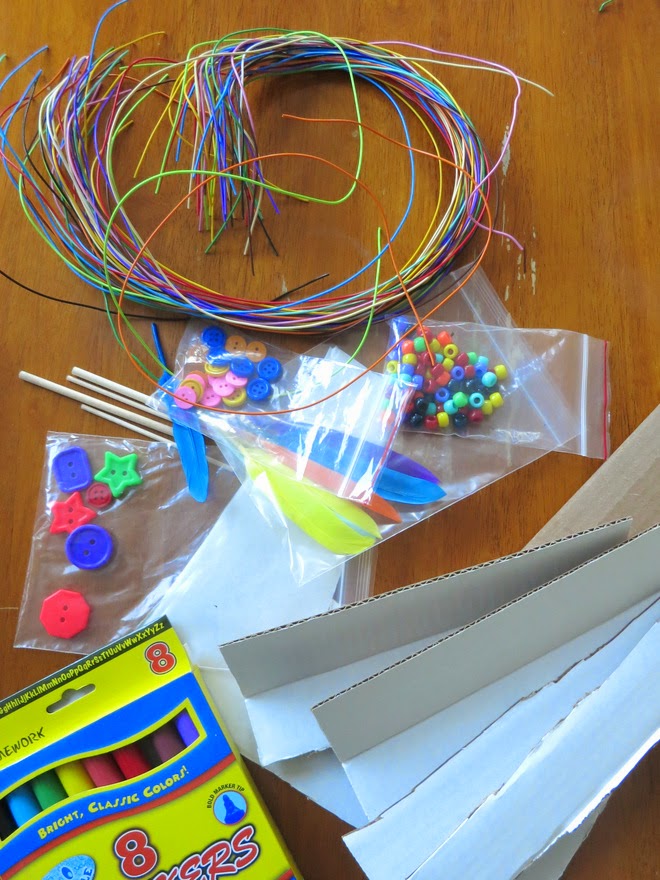 I highly recommend the Twisteezwire Mask Kit for the 8+ crafter in your life! You can buy bundles of Twisteezwire, as well as see lessons and their amazing gallery on the Twisteezwire website. Expect to see more Twisteezwire projects from us in the near future!
Email ThisBlogThis!Share to TwitterShare to FacebookShare to Pinterest
Labels: CHA 2015, Crafts for Kids, Product Review, Products I Love