We just returned from our annual spring break snow trip to Bear Valley (at approximately 7000'), where Steve's parents own a cabin. We're never quite sure what to expect when we schedule the trip. It's pretty much a given that there will be 10+ feet of snow in the subdivision and the roads will be closed. This means we park at the lodge, use sleds to drag our luggage up the hill to the cabin, and dig our way in. In 2011, we had to dig DOWN to get to the front door on the second story. This year, the roads were not closed and there was no digging. In fact, other than a tiny patch of snow on the shady side of the cabin, there was no snow at all.

No matter where you are, you've probably heard that California is in a drought and that the snowpack is dangerously low this year. In fact, it's a record-breaking year... and not in a good way. This is around 7200'. No snow there, nor on the mountains in the background. 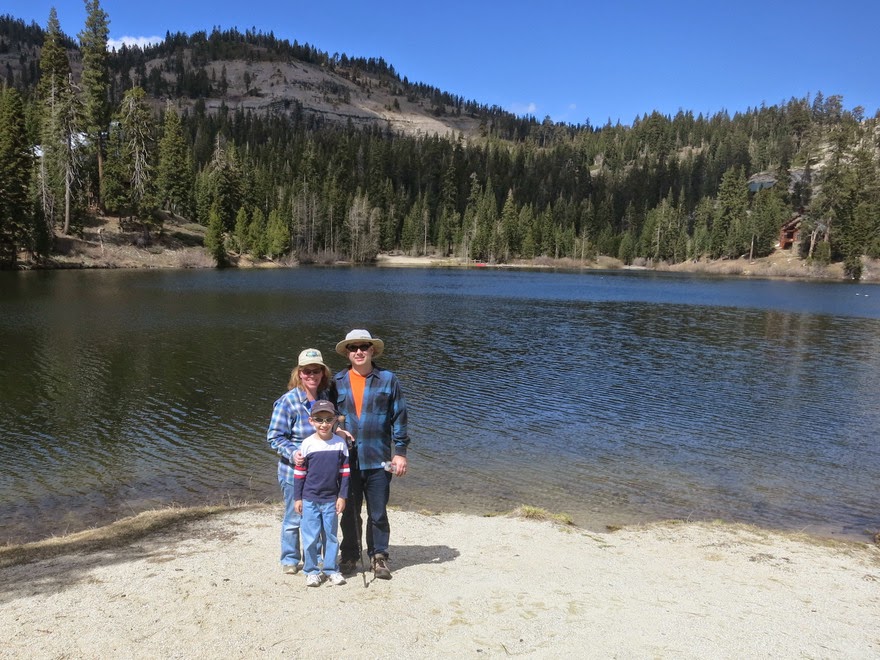 The ski resort at Bear Valley (8000+ feet) makes snow, yet this is what it looked like when we were there last weekend. It's unbelievable. It usually looks like this in late May... or even June or July. 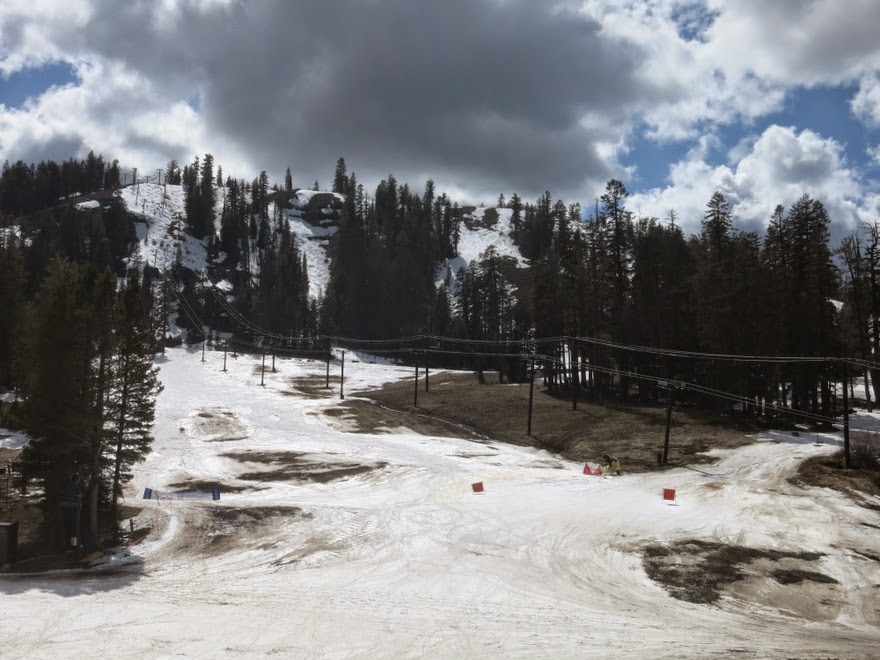 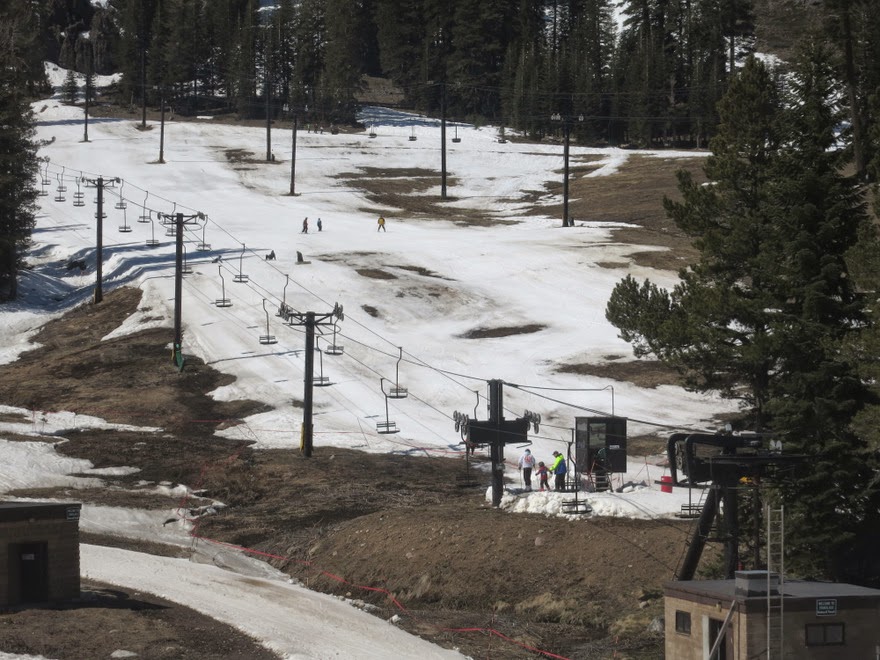 Fortunately, they were still operating, so Trevor and his friend Ronan did get at least a little bit of snow time one morning. The place was practically deserted, so it wasn't too difficult to ski around the large dirt patches. We left around 1:00. What little snow was left was getting slushy.

Usually when we go to the cabin in the spring, the boys build snow forts, go sledding, and pretty much spend all day every day outside in the snow. They amused themselves (and us) by trying all the snow activities they'd usually do in the small patch of snow behind the cabin. Their attempts at sledding were hilarious. 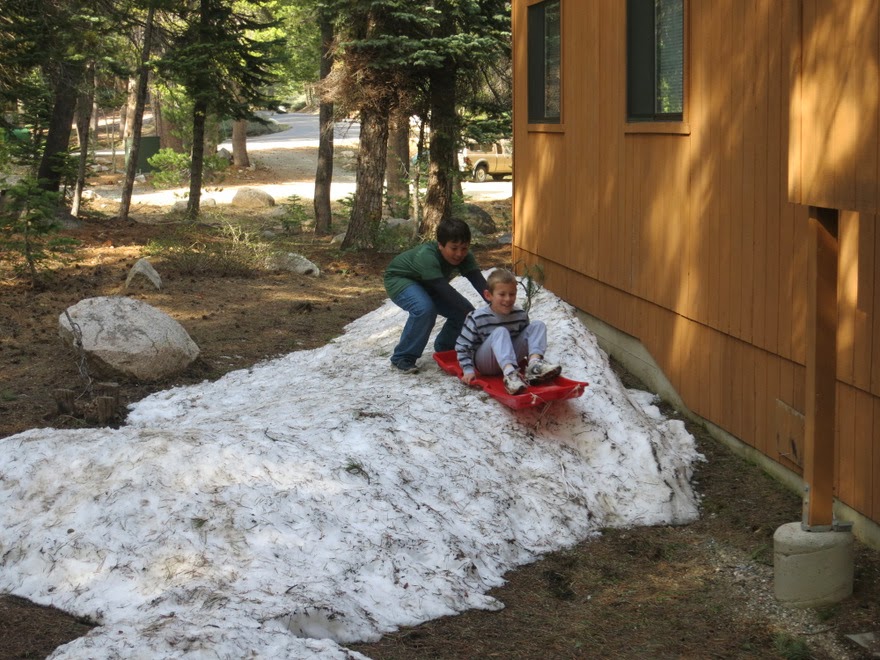 One nice thing about the lack of snow (other than being able to drive up to the cabin and not having to dig our way in) was that we could do some geocaching. (Needless to say, we don't geocache when caches are covered in 10-20 feet of snow.) This little fellow with a brown bushy tail nervously watched us search for a nearby cache. I think he's a marten. 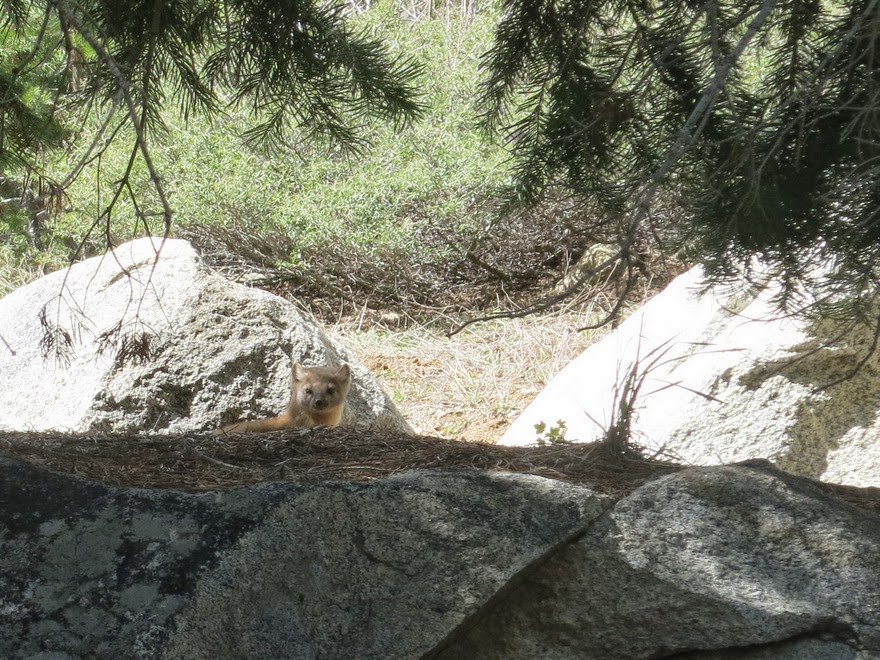 We also did lots of Easter activities. Jonna had sent me the link to a video (no longer online), suggesting that we might try it at the cabin. I was skeptical as to whether it would work or not, but agreed to try it, knowing that an utter failure could make just as good a blog post as a success would. I played the video for the assembled group, then asked them whether or not they thought it would work the way it did in the video. Jonna was optimistic, while Ronan and Trevor were both doubting a bit. Nobody was sure it WOULDN'T work, but no one else was as confident as Jonna. 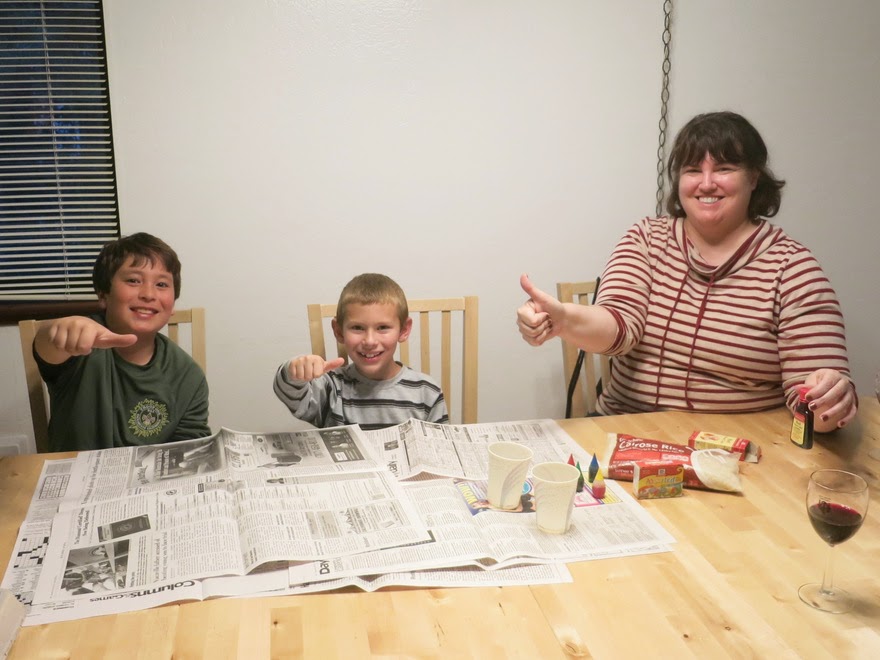 While Jonna got out the rice she'd brought, I pulled out food coloring and the eggs I'd brought for our Easter morning omelets. Immediately there was concern. The eggs weren't hard-boiled. I dye raw eggs all the time without issue, so I'd never even thought that I should hard-boil them for this application. Would raw eggs withstand the shaking as well as cooked? We'll see!

Issue #2 arose when we realized we didn't have lidded cups. We decided to use cling wrap instead of a lid and hope for the best. Ronan and Trevor each put rice into a cup, then added food color. 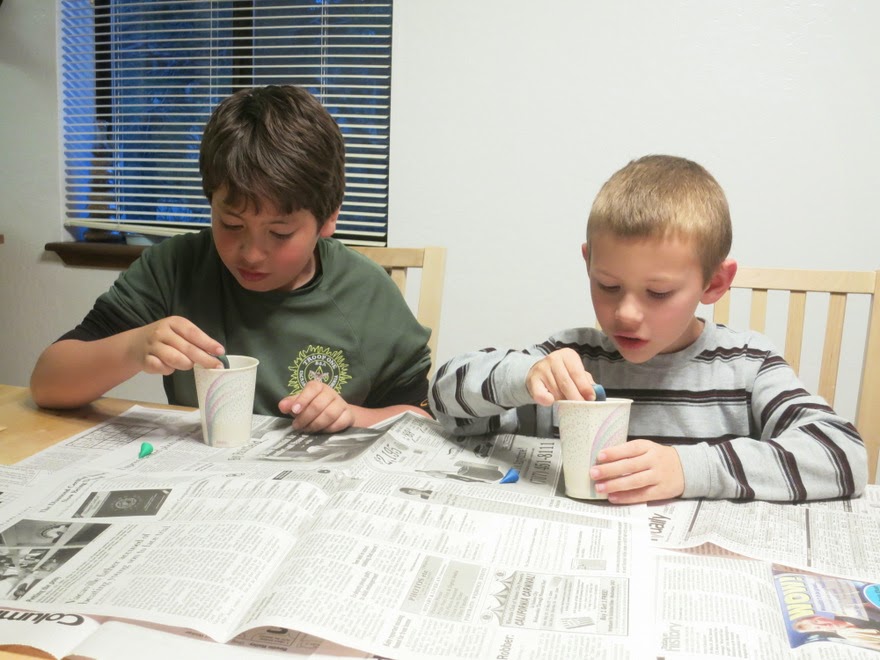 They put the cling wrap tightly over the cups and shook to distribute the dye throughout the rice. Then they gently peeled back the cling wrap and placed an egg in the cup. They shook it, gently at first, then more vigorously as they realized the shells weren't going to crack. 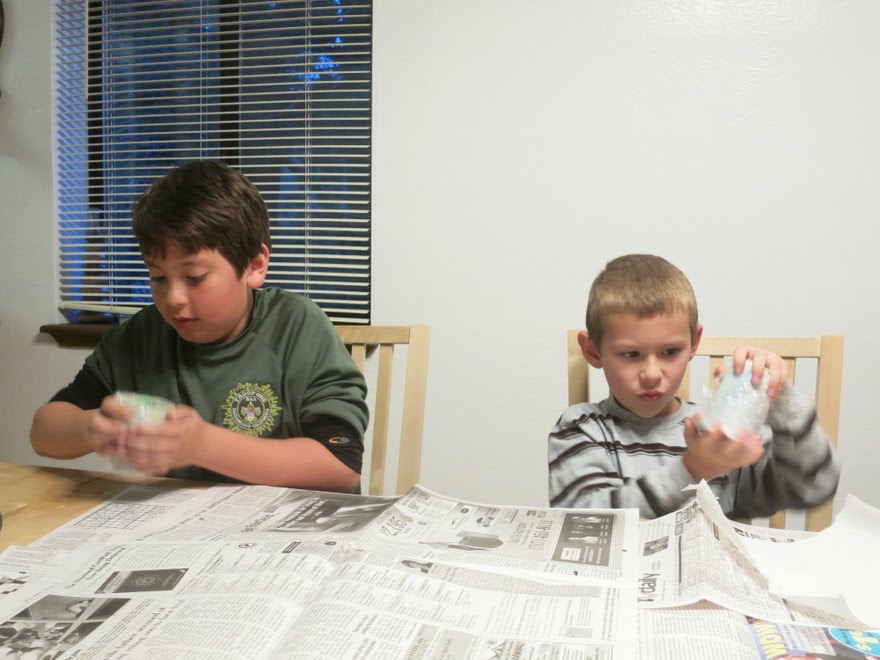 They fished out the first eggs... success! They were gorgeous and perfectly mottled. They tried other colors and combinations of color. Success all around. Rice dyeing for the win! 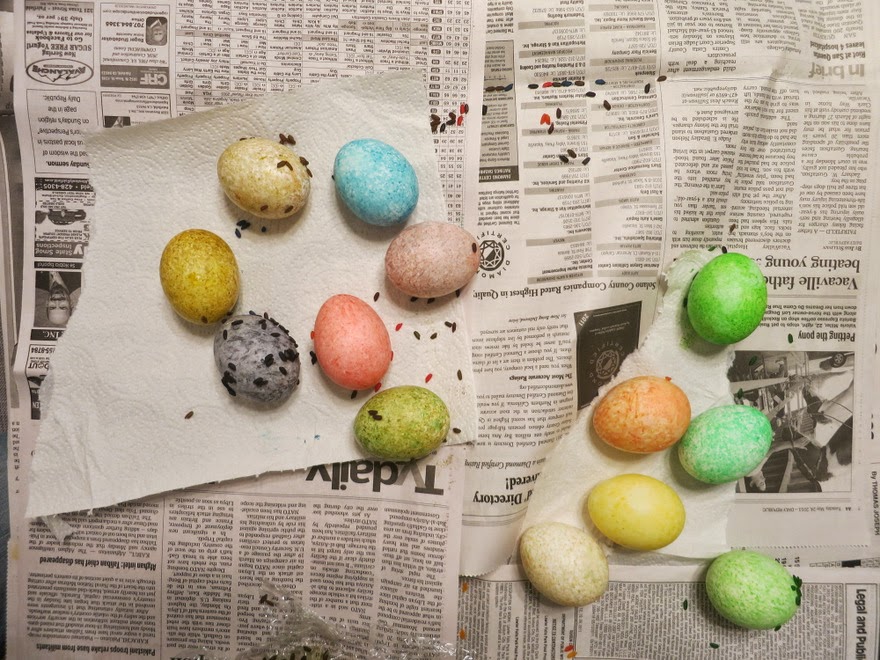 We let the eggs sit until the dye dried, then brushed off the extra rice bits. They were so pretty! We made all of these shades with just the four little bottles of food color (red, yellow, blue and green). 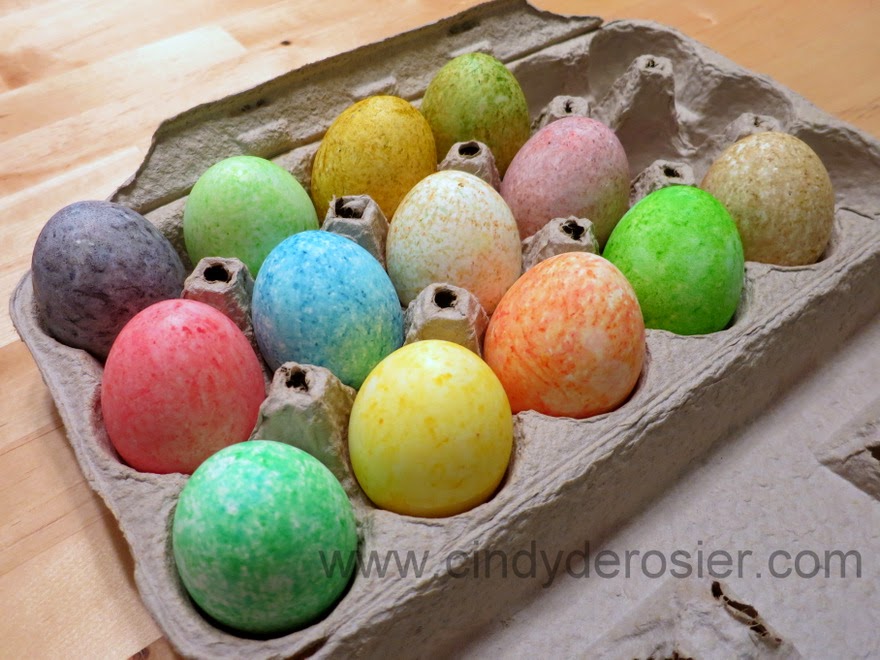