Trevor has been taking ice skating lessons once a week for a little over five months now. The way the lessons are set up is brilliant. The first five skill levels are taught during the same hour on different parts of the rink. Each student wears a badge with the skills for their level. When they master a skill, they get a star sticker. When their badge is full, they move immediately to another teacher on another part of the rink to get their new badge. Because new students can start at any time and move up to a different level at any time, the class numbers are always in flux.

The students do a recital every 10th week, with each class performing one piece. Trevor leveled up for the first time during the 8th week of this term, so rather than learn a new (harder) routine in one week and perform it the next, he dropped down to his previous level to perform the routine he'd been working on. And as it turned out, he and his friend Devin were the only skaters for that routine! Here they are with their instructor, William, performing Surfin' Safari. Trevor is in blue. 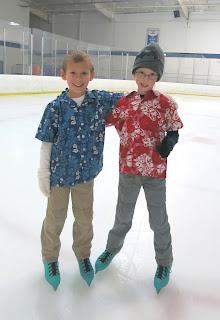 Each recital has a theme across all the levels. For this last recital, every routine had a surfing theme. The previous theme was Disco (Trevor performed to "In the Navy") and the one before that was Disney (Trevor's group did "In Summer" from Frozen). When the next 10-week session started up, Steve wondered out loud if we'd start to see themes repeat once Trevor had finished five 10-week sessions or if the themes are completely different from year to year...

C: I bet they do new themes every time.
S: But coming up with five songs each time without ever repeating a theme? Seems hard.
C: It's doable. Maybe. What's your guess about this session's theme? Quick, before they announce it!
S: Halloween? Like Monster Mash and Thriller.
C: Fun! But probably not. The next performance is at the beginning of October, which is early for Halloween.
S: Maybe 80s?
C: Good one! Beatles? Wizard of Oz! Maybe Country. You know what would be fun? Prison!
S: Prison?! Can you name five child-appropriate prison songs?!
C: Sure! Jailhouse Rock. Folsom Prison Blues. Umm.... I Shot the Sheriff?
S: That's three. And I'm not sure they're child-appropriate.
C: OK, maybe no Prison theme... but this is a fun challenge!
S: Name five kid-appropriate songs for a theme that may not seem child-friendly?
C: Yes!

It's been two weeks and my brain is obsessed with thinking up categories and songs. No matter how hard I try, I can't stop! So now I challenge you. Can you name five songs to fit a child-friendly theme? Any guesses about what this term's theme actually is?
Email ThisBlogThis!Share to TwitterShare to FacebookShare to Pinterest