Omelet in a Mug

Steve and Trevor were at Cub Scout Camp last week, so I had the house to myself for four days. It was the perfect opportunity for me to try out some mug meals. If you aren't familiar with mug meals, the concept is that you can make a complete meal for one in a mug in just a few minutes, using your microwave. Mug meals are insanely popular right now. Time to see for myself if they're worth the hype!

For my first meal, I chose an omelet. Omelets in a bag are nothing short of a miracle, so I was ready to be equally impressed with an omelet in a mug. I chose a promising recipe and set out to make my breakfast. And (spoiler alert)... it was awesome! 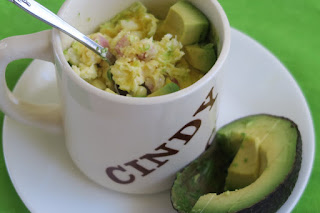 As usual, I'd intended to actually follow the recipe. But I am pathologically incapable of doing so. I deviated from the recipe on THE VERY FIRST STEP. (Does this surprise anyone?) Instead of spraying the mug with cooking spray, I decided to butter it liberally instead. I googled a bunch of other omelet-in-a-mug recipes to see if any of them had used butter successfully and I couldn't find a single blog that mentioned it one way or the other. Confident, I persisted. Until I came to the part about bell peppers. I don't buy them anymore since they bother Steve, so I substituted the same amount (-ish, because I'm not into measuring) of fresh corn kernels.

Here's how it looked heading into the microwave: 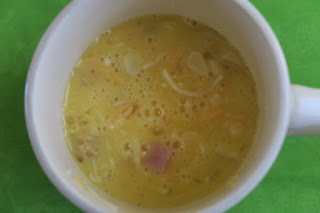 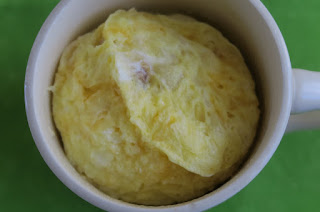 I cubed an avocado and added some to the mug. 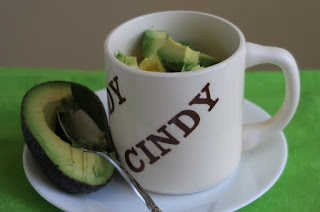 It was delicious! It tasted just like a 'real' omelet and was properly cooked through, with no areas that were under- or overcooked. The corn was a delicious touch. I'm pretty sure I've never put fresh corn in an omelet before. As I ate my way down, I added more avocado cubes, which went really nicely with the ham, cheese and corn. 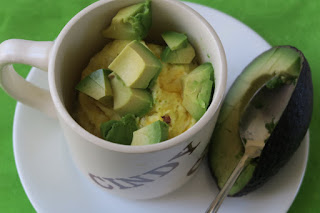 Cleanup wasn't quite as easy as I'd hoped, as there was quite a bit of egg/cheese stuck to the inside of the mug. I don't know if this was because of the butter vs. cooking spray decision, but it wasn't a big deal. I just left it to soak, then gave it a quick scrub and tossed in the dishwasher. (Technically, I should call our dishwasher a sterilizer, because regardless of what the manufacturer might have intended, it does not wash dishes. We can't leave even the tiniest speck of food on our dishes or they emerge from the "dishwasher" with that food still on them. Anyone recommend a good dishwasher for when we finally break down and replace ours?)


Anyway, I give the Omelet in a Mug a 9.5 out of 10. This will definitely be on my breakfast table again.
Email ThisBlogThis!Share to TwitterShare to FacebookShare to Pinterest
Labels: Recipes