The Omelet in a Mug was so successful that I was really excited to make my next meal in a mug. I chose a pasta dish, with elbow macaroni, tomatoes, broccoli and cheese. 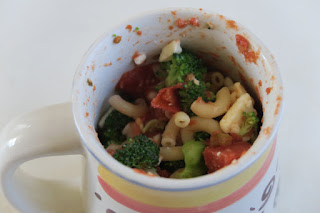 It was not a success. I'm not going to link to the recipe because you shouldn't make it. Not because it wasn't tasty - it was pretty good. But because it did not fulfill the promise of a mug meal. A mug meal should be easier and faster than cooking a dish conventionally. This took just as long and took just as much effort as making it on the stovetop. And it left my microwave a mess. See the way the tomatoes spattered like crazy?

I've done some googling and found people who swear by mug pasta. Perhaps there are some great recipes out there and I picked a dud. Though reading through a bunch more, it appears that the recipe I tried is very similar to a lot of the others. If you have had success with mug pasta, link the recipe in the comments and I'll give it a try.

Fortunately, the disappointing Pasta in a Mug did not deter me from trying Pizza in a Mug. It was, in a word, awesome. And I actually followed the directions! Well, mostly. I used canola oil instead of olive oil, left off the pepperoni, and skipped the dried herbs. For me, that's as close as I get to following a recipe.

Here it is heading into the microwave: 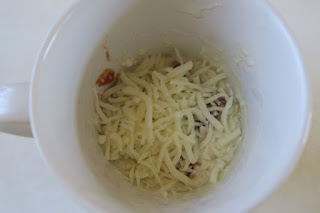 And this is what it looked like a little over a minute later. 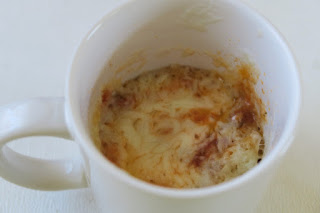 Yum. So cheesy and good! 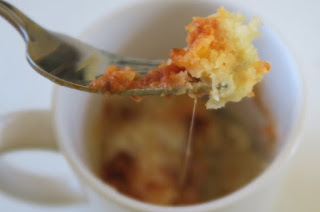 Don't expect a traditional pizza crust. It's a biscuit base - and a tasty one at that. I suspect that the same base would be fantastic in a lot of other applications. I'm going to have to do some experimenting!

If I have any complaint about this dish, it's that measuring 1/16 of a teaspoon is not easy. It doesn't matter to me because I always eyeball measurements anyway, but I know it would drive Steve crazy not to be able to measure precisely. Knowing him, he'd probably weigh a quarter of a teaspoon of baking soda, then add precisely 1/4 of that to the mug, with an accuracy down to the fraction of a gram. He's reading this, so I'm sure he'll let me know if I'm right or wrong in the comments.
Email ThisBlogThis!Share to TwitterShare to FacebookShare to Pinterest
Labels: Recipes