Kitchen Science: How to Make an Eggshell Disappear

Have you ever done the classic experiment where you remove the shell from a raw egg, keeping the egg intact? I'd done it before, but Trevor hadn't, so when I had the chance to do the experiment and write about it for Little Passports, I jumped on the opportunity!

Put two eggs into a clear container and cover them with vinegar. 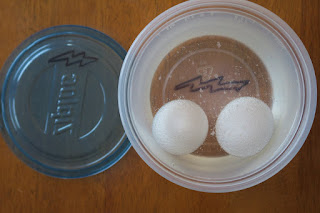 Incidentally, those lightning bolts? After spending a ridiculous amount of time searching for a matching lid awhile back, I took out ALL my containers and used a Sharpie to draw matching shapes on each container and lid. All identical containers get the same shape. It is easy to tell at a glance if the lids fit, which has significantly reduced kitchen rage. But I digress.

Put the lid on the container and store it in the refrigerator for 24 hours.

Take the container out of the fridge and remove the lid. Wow - foamy! 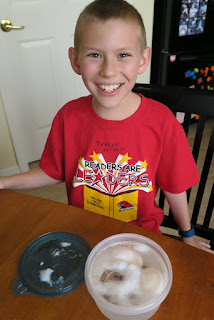 That foam is the calcium of the eggshells. 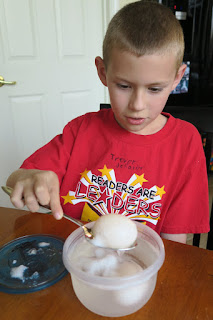 At this point, you can proceed on to the next phase of the experiment if the eggshells are completely dissolved. We rinsed our eggs and they were indeed shell-less, but Trevor insisted we add more vinegar and let them sit overnight a second day just in case. I'm all about letting him direct our hands-on science, so I agreed... even though I kinda needed the photos promptly so I could write the article with a looming deadline. Oh well - one day doesn't matter nearly as much as letting Trevor direct his own learning.

We rinsed the eggs again and this time Trevor was convinced that the shells were completely gone. He gave an egg a tentative squeeze while I cringed. Fortunately, the membranes are pretty strong. 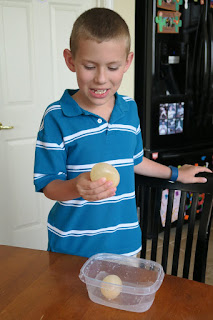 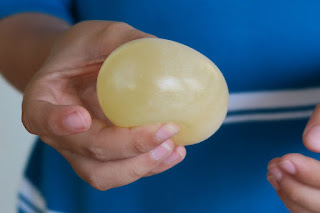 Trevor put each egg into a separate glass. He filled one with water and the second with corn syrup. 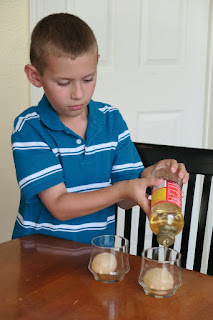 One difference was apparent immediately. Water and corn syrup have different densities. Trevor has done a lot of experimenting with density, but if he hadn't, this would have been a great opportunity to explore why things sink or float. 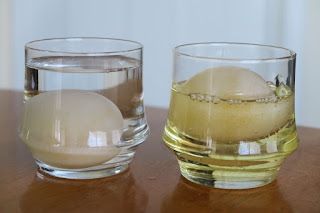 We put the eggs back into the fridge for 24 hours.

Check out the eggs now! That's corn syrup on the left and water on the right. 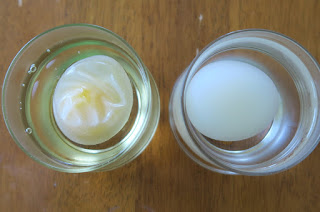 Trevor used a slotted spoon to remove each egg. The one in water was firm and plump, while the one in corn syrup was flabby and shrunken. 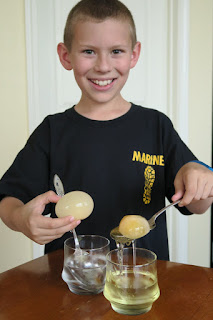 Trevor wasn't quite ready to figure out why. He wanted to play with the corn syrup for awhile. No problem - he's learning through play. While he continued to play with the corn syrup, I rinsed the corn syrup off the egg. Here are the two eggs side-by-side on the table. Remember, they started out looking identical. 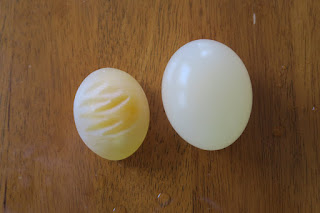 Here they are in Trevor's hands. 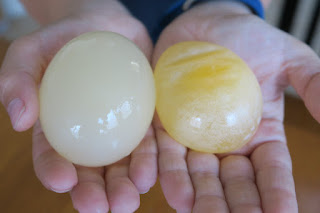 So what happened? The egg's membrane is selectively permeable. It allows small molecules, like water, to pass through, but blocks larger molecules, like the sugar in corn syrup. Egg whites are about 90% water, so as water passed freely through the membrane of the egg in water, it ended up taking in some water and becoming more firm. Corn syrup is about 25% water, so much of the water in the egg whites passed through the membrane into the corn syrup, resulting in the shriveled appearance.

We placed both eggs into water and returned them to the fridge overnight. Would the shrunken one plump up? Yes!

The final step of our experiment was to break the membranes and see if the eggs looked different than a standard raw egg. One option would have been to break them over a bowl or the sink, make observations, then throw out the egg. We went for the other option: 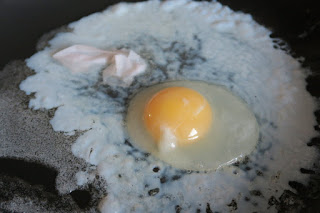 This was something I hadn't tried before, so I was eager to see what would happen. It was fascinating the way the yolk and some of the white came out just like it normally would. But a lot of the white was very watery and spread all over the frying pan. The membrane sat there like a burst balloon. I fished it out, then cooked the egg completely. We scrambled the second egg. Finally, it was time to taste....

Yuck! The vinegar that removed the eggshell was clearly made up of small enough molecules to pass through the selectively permeable membrane. Well, now we know!

Kitchen science is so much fun!

Posted by Cindy deRosier at 5:00 AM
Email ThisBlogThis!Share to TwitterShare to FacebookShare to Pinterest
Labels: Crafts for Kids, egg, Little Passports, science, Trevor