Another fair season has come and gone and it was another successful year for the deRosiers. Well, for Trevor, that is!

Between our Utah and Alaska trips, various camps, and everything else we've done this summer, we were gone during the delivery dates for baked goods for both of the fairs we enter. We couldn't make the delivery date of non-perishables for one of the two fairs. Steve opted not to enter anything. Because of the usual limitations wherein I can't enter anything I'm actually good at making, I entered the only jewelry I made this year, a pair of beaded earrings. Inexplicably, I haven't shared them on the blog. I like them, but they're really simple and did not place. So no fair ribbons for Steve nor for me this year. Fortunately, Trevor made up for our shortfall.

Trevor aged out of the tablesetting contest that he's done for years, so he decided to choose from amongst the other live competitions. The first was a robotics competition. He wrote a simple program for his kit robot, Sparki and presented it in front of the judges and fairgoers. He did very well and earned 1st place for his age group and category! This might seem less impressive when I tell you that he was the only contestant in his age group and category, but the low number of contestants probably reflects that fact that most 10 year olds are not into voluntarily doing programming and public speaking. 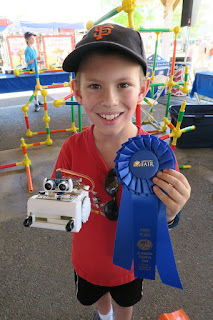 The other competition he entered at that fair was a cell phone photography contest. There were 20 kids in that competition, divided fairly equally in two age groups. The kids were given a list of prompts. They had one hour to take 10 pictures based on the prompts and upload them to Instagram. The judges graded each photo on subject, composition, originality and impact. Parents were allowed to trail behind their kids as they ran around the fairgrounds, but could not assist in any way.

Trevor had literally never taken a cell phone photograph until 10 minutes before the contest started. He learned how to upload to Instagram at the same time. Fortunately, he learns quickly and is very comfortable with technology. He spent the first 30 minutes photographing lots of different things that could fit the prompt, then used the next 30 minutes to edit and upload. 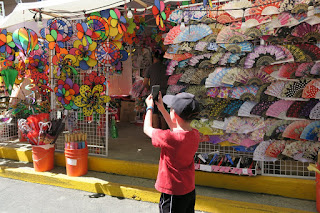 After the hour was up, it took awhile for the judges to tabulate the scores. Trevor and his cousin, Timothy, passed the time by liking each other's photos on Instagram and stalking how many other people were liking their photos. 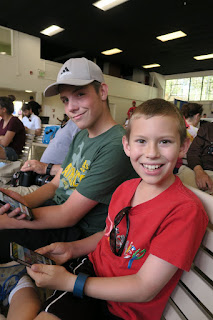 We were shocked when Trevor won first place in his age division! We were even more shocked to learn that he was third overall of the 20 kids from ages 9-17! Good job, Trevor! 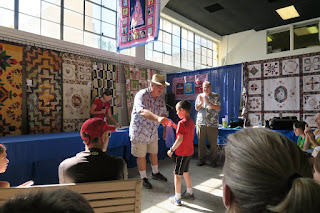 Trevor entered 27 of his crafts in our local county fair and did very well. Here you can see blue ribbons for his Peekaboo Garden, functional Paper Ferris Wheel, and Hot Cocoa Art. 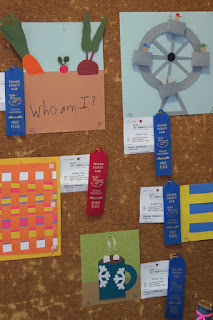 Here are firsts for his Bunny Finger Puppet and Super Scout. 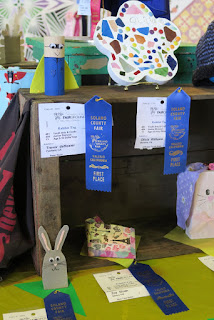 Grandma taught Trevor about canning, so he entered preserved food for the first time. His pomegranate jelly earned a first place. 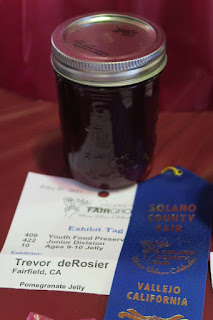 I'll share one last item with you. This is a monogram that Trevor decorated with washi tape and Sharpies. 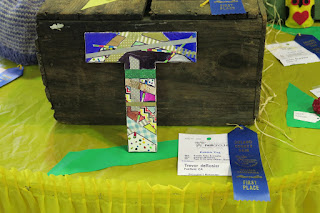 Tomorrow I'll show you how I decorated my monogram with washi tape and a silk flower.
Email ThisBlogThis!Share to TwitterShare to FacebookShare to Pinterest
Labels: County Fair