Happy Halloween! Time to show off the costume that Trevor and I have been working on for the past month! 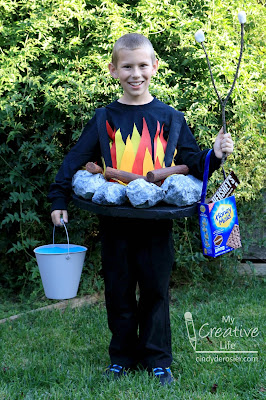 You can't tell in the photo, but the campfire lights up!

Steve was on a business trip, but I dressed to coordinate with Trevor's costume. I'm a Webelos Scout. That's an adult uniform shirt I'm wearing, but the hat and neckerchief are Trevor's. 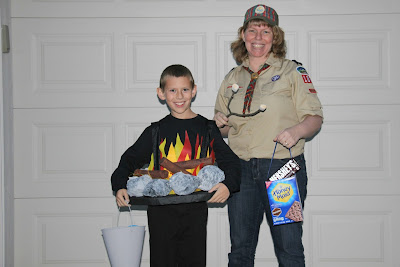 This year, we trick-or-treated with seven other kids (four of whom dressed as cats). 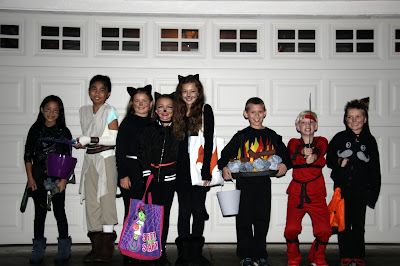 After trick-or-treating, we split off from the cats and headed back to our house. Trevor took off his costume and then this happened. So cute. 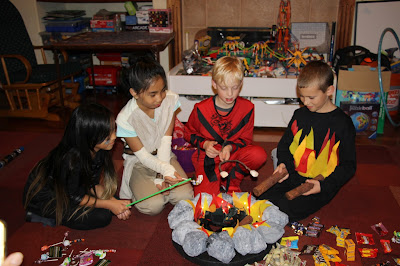 
The campfire itself started as a flat piece of styrofoam. Using a serrated knife, we cut it into a donut shape that fit around Trevor's waist. We cut a piece of foam pipe insulation (the same we used for the eel I despise) into 6-8" lengths; these became the logs in the campfire. Then we started wadding up newspapers to make the rocks. 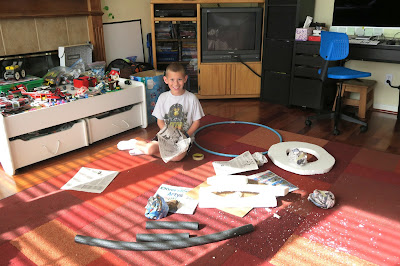 A small strip of masking tape kept each newspaper from un-wadding. 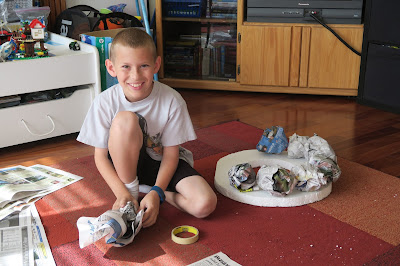 The next step was vacuuming. As you can see in the previous two photos, cutting styrofoam makes a big mess!

We wrapped the styrofoam with gaff tape. 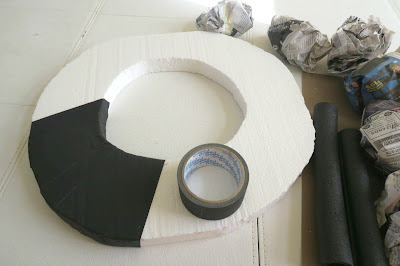 Next, we put a coat of paper mache on all of our rocks and logs. I say "we" but Trevor refuses to touch gooey things, so I have to do all the paper mache around here. He preps the newspaper strips, takes the photos, and supervises. 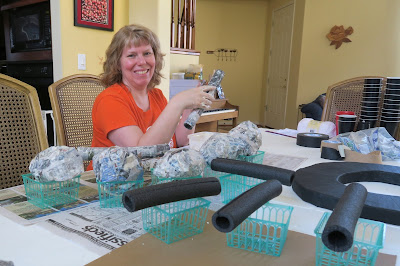 It took a few days for the paper mache to dry completely. Then, Trevor painted the logs brown.... 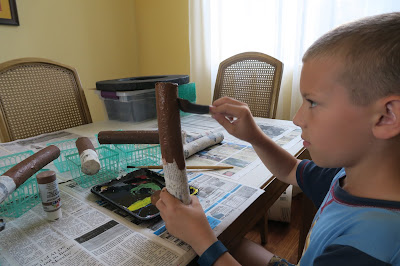 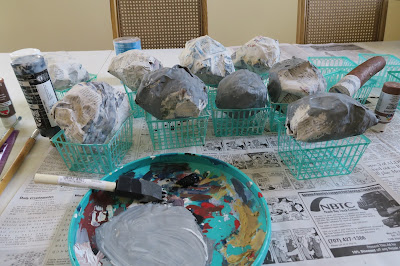 When the base coats were dry, we sponged different greys on the rocks to give a more realistic appearance. We used a black Sharpie to draw woodgrain on the logs.

Then we cut black ribbon to make straps for the campfire. We used push pins to temporarily attach them to the styrofoam. 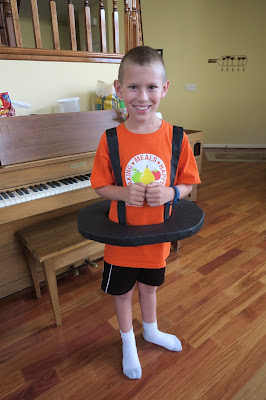 He took off the costume and arranged the rocks. It was like a puzzle getting them to all fit nicely without gaps. 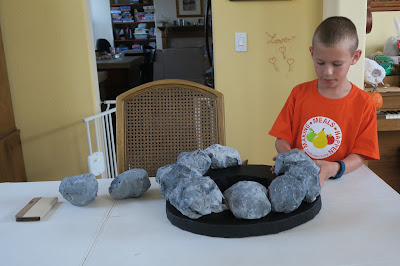 The next day, Trevor glued the rocks and the straps in place. 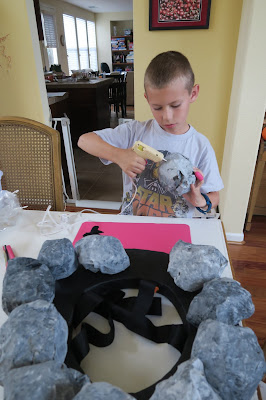 He tried the costume on and Trouble had to come check it out immediately. Rabbits are SO curious! 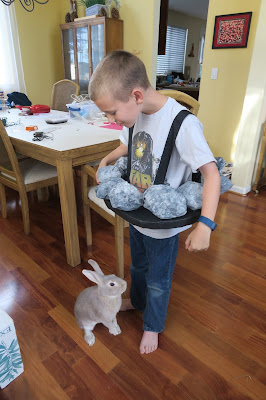 Trevor cut a bunch of flames from red, yellow and orange Oly*Fun. Love that stuff! 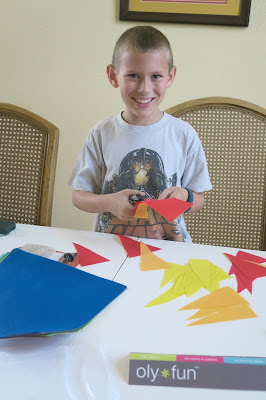 Before gluing the flames in place, he put on all three of my Hot Glue Gun Helpers on his fingers. He's nervous about getting burned when he uses the glue gun and these make all the difference in his confidence level. I love them too. 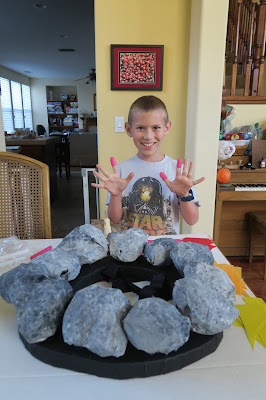 Here's the costume with all the flames in place. 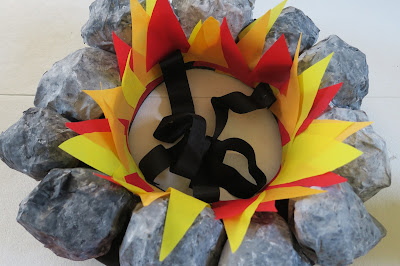 We used more Oly*Fun on Trevor's black shirt. A line of gaff tape marked where the shirt would show underneath the campfire, so we kept all the flames above that line. 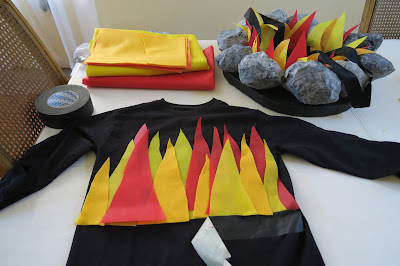 We found a string of battery-operated white lights and taped them to the inside of the campfire. Once Trevor gets the costume on, we can adjust the lights so they shine through the Oly*Fun. The on-off switch sits under one of the front rocks, so Trevor can easily turn the lights on or off. 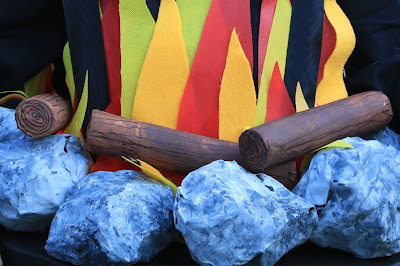 With the basic costume done, we moved to accessories. Somehow, I don't have a photo of how we made the water bucket. It started out as an Easter bucket, which we primed and painted grey. Then we added an oval of blue craft foam to look like water. When he goes trick-or-treating, he'll lift up the "water" so the candy can go in the bucket.

The marshmallows are Crayola Model Magic molded around the ends of a stick. When the clay dried, we used two different shades of chalk ink to give them a toasted look. 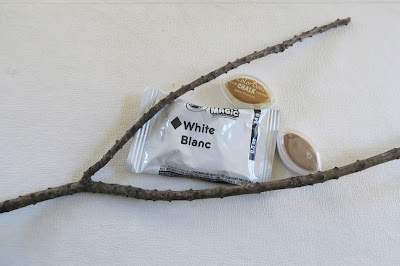 We carefully opened and emptied a graham cracker box and a Hershey bar. We pushed the flaps of the box in and glued a ribbon handle in place. 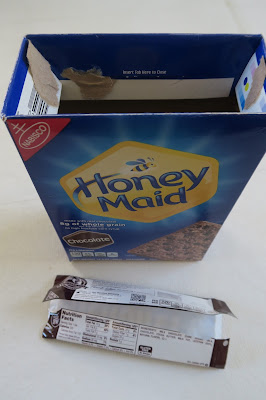 I cut a piece of cardboard to the size and shape of the Hershey bar, glued the wrapper back together, and attached it to the graham cracker box. 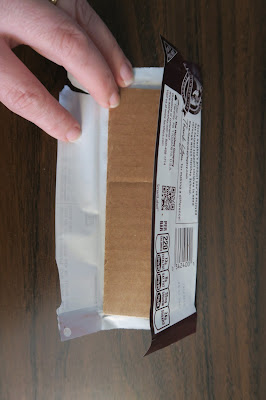 The photo at the top of the post shows the costume through this step. We actually have one more accessory, though I don't think Trevor is going to wear it as part of the costume. We took a pipe cleaner and curled it into the shape of smoke. We glued cotton balls to it, then sprayed it grey. 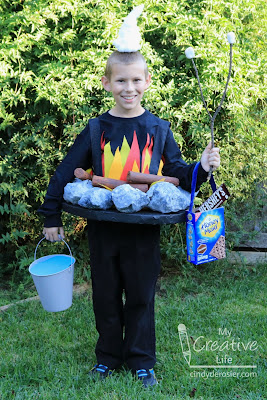 We're both thrilled with how this costume came out. It was a lot of fun making it together. Below are affiliate links for some of the materials we used.

Email ThisBlogThis!Share to TwitterShare to FacebookShare to Pinterest
Labels: Crafts for Kids, Halloween