Have you ever heard of syllabub? It's a drink and a dessert (sort of the way a milkshake is a drink and a dessert) that was served for special occasions during colonial times. The fifth graders and I are wrapping up our study of the American Revolution, so we celebrated with some tasty syllabub. Syllabub can be made with wine or with apple cider. We chose the kid-friendly version, of course. 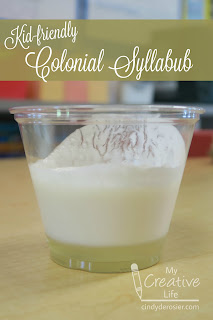 
Use a funnel to pour 2 cups of cider and 2 cups of cream into a clean, empty bottle with a screw-top lid. Add sugar and the juice of one lemon. 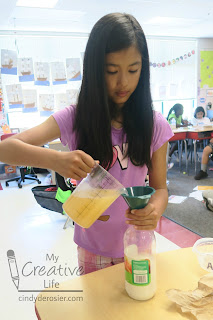 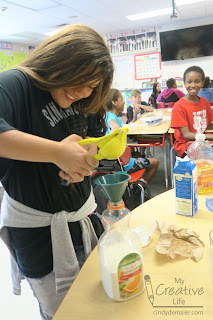 Put the lid securely on top and shake vigorously until the liquid thickens somewhat, approximately 5-10 minutes. Pour it into cups. (The colonists would have used a syllabub glass, which is pretty awesome. But alas, I don't have one, let alone 34.) 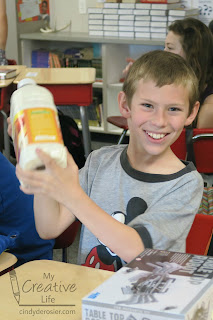 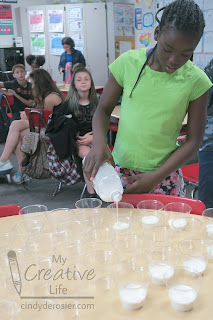 As you can see, the syllabub looks like cream at this point. It takes about 30 minutes for it to separate into the layers that characterize a syllabub. While we waited for our drinks, we did Reader's Theater. Half the class performed one play about the Constitution for the other half, then we switched and they performed a second play. 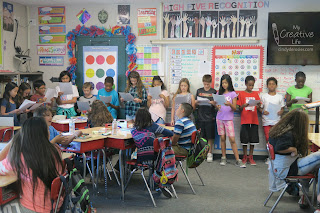 Finally, we enjoyed our syllabub. Yum! Not everyone liked it, but most did. It reminds me a little bit of an orange julius, if an apple julius were a thing.
Email ThisBlogThis!Share to TwitterShare to FacebookShare to Pinterest
Labels: Hands-on History, Recipes