If everything went as planned, I got home from Phoenix really late last night. I've prescheduled posts for the rest of this week and will share all the details about my time at Creativation on Monday. If you can't wait until then, check out the My Creative Life Facebook page!

One of our family's favorite things to do when we travel to new cities is an Urban Adventure Quest. It's a challenging mobile phone scavenger hunt that teaches you about the history and important features of the city. Our first Quest was in Sacramento in March 2016. We were hooked. Since then, we've done Quests in Salt Lake City, Santa Fe and Albuquerque, Phoenix, Philadelphia, and Baltimore.

Actually, we've done two more... as beta testers! We did beta testing for a Quest in San Jose in December 2016, then were invited to beta test a second Quest along the Embarcadero in San Francisco. I combined these two into a layout: 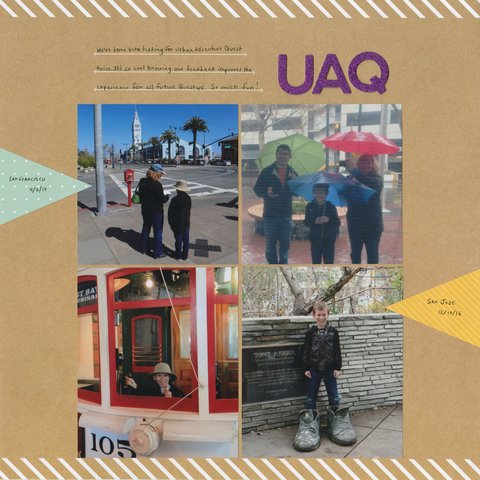 
It was a completely different experience doing beta testing compared to running the actual Quest. But it was just as fun! And so rewarding to know that our feedback made for a better experience for everyone who runs these Quests in the future.

Where will our 10th Quest be? I'm not sure yet, but with 63 locations (and counting) there are plenty to choose from! To get 20% off your own Quest, use the code CREATIVELIFE. Happy Questing!
Email ThisBlogThis!Share to TwitterShare to FacebookShare to Pinterest
Labels: California, Layouts, San Francisco, San Jose, Urban Adventure Quest, US Travel