This post contains affiliate links. Thanks for your support!

I've been brainstorming crafts representing each of the 50 states, with hopes to have at least one for each state by the end of the year. This is what I came up with for Colorado: 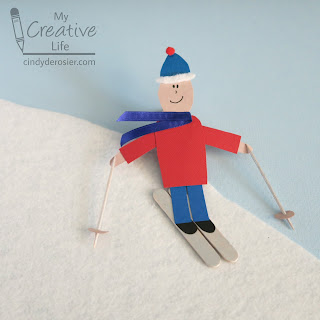 Of course, it works for many other states, too!

A lot of my crafts, including this one, start as sketches on a scrap of paper. There's a bit of trial and error involved in turning a sketch into a physical craft. But that's half the fun for me!


Paint two craft sticks and two toothpicks silver. Set them aside to dry.

Cut the felt along the diagonal to create a snowy slope. Make it as steep as you want! Glue the felt to the light blue background. Cut a sliver of white felt to use as trim along the edge of the hat.

Cut all the body parts and clothes: an oval face and two oval hands from the skin tone paper; a rectangle with a slim bit cut out (pants) and triangle (hat); a curved rectangle (jacket) and two rectangles (sleeves). Save the scraps.

Assemble the hat: glue the felt sliver to the bottom of the triangle and add a mini pom pom on top. 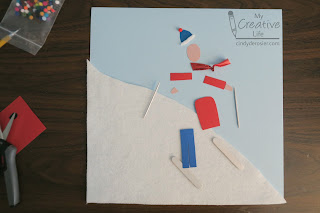 Cut two boots: ovals the same width as the craft sticks. Glue them in place. Glue the pants on top of the boots. 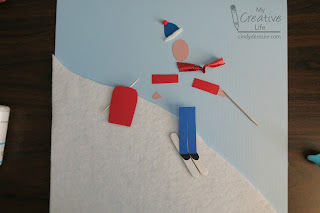 Assemble the torso by connecting the hands, sleeves, and jacket. Add a folded scrap to the back. 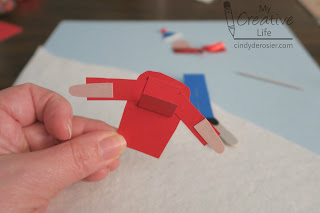 Glue the torso to the legs. Pick the whole thing up and put glue on the jacket flap and the craft sticks. Glue it in place on the background.

Cut two small circles of grey or silver construction paper and poke the toothpicks through them to make ski poles. 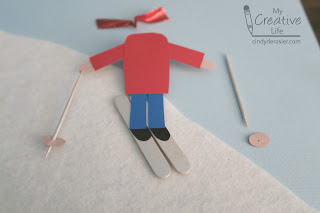 Add facial features with the black pen. Glue the hat to the head. Add a piece of ribbon for the scarf. (I changed the color because the red didn't have enough contrast against the jacket.) 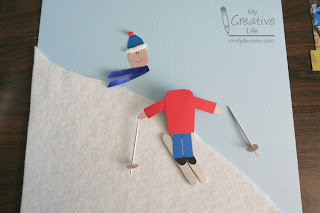 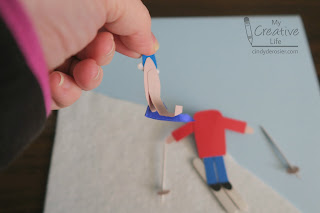 Add glue to the flap and the head. Glue the head to the jacket. Here's what it looks like from the side. 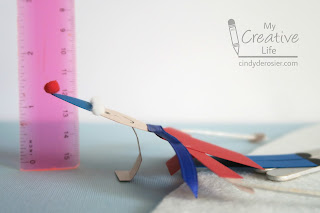 Glue the ski poles to the hands. 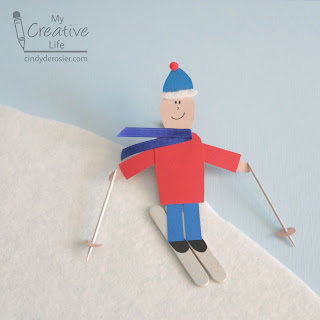 Your skier is complete!

Fun fact: I've been to Colorado for weeklong visits four times, but have never been skiing there. (I have skied in California, Nevada, and Washington.) Yet skiing is the first thing that comes to mind when I think of Colorado!
Email ThisBlogThis!Share to TwitterShare to FacebookShare to Pinterest
Labels: Crafts for Kids