Our family will be spending five days in Kentucky in August and we can't wait! We'll be splitting our time between Frankfort and Louisville. Each has so many fun things to do that I'm really struggling to narrow down where we'll go. I was happy to see that the Kentucky Little Passports was the next on our list to complete, as each State Journal we've done has given me lots of places to put on our must-visit list. 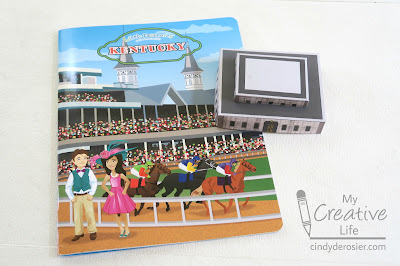 The model was of Fort Knox and there was a crossword puzzle about it, too. We won't be going there during our trip. Unfortunately, the Patton Museum at Ft. Knox is currently closed for renovations and obviously they don't let the public tour the Ft. Knox Bullion Depository. I can't imagine what security would be like if they did!

Somewhere we will be going? Churchill Downs, home of the Kentucky Derby, pictured on the front cover of the State Journal. Trevor solved a logic puzzle to learn the name of the fireworks show that kicks off the Kentucky Derby each year. The next activity, also inspired by racehorses, was making a thaumatrope device that tricks the eye into seeing two separate images as one.

I had no idea that the red, yellow, and green traffic signals that we see at intersections have their origins in Kentucky. They were invented by Garrett Morgan and operated by a hand crank. After solving a map puzzle, we learned that Morgan also invented a breathing device that was used to save the lives of men trapped underground while building a tunnel!

Thomas Edison displayed nearly 5000 of his recently-invented incandescent light bulbs in Louisville during the Southern Exposition from 1883-1887. With Steve's help, Trevor followed the directions to put together a model of an incandescent light bulb. It's handy when Dad has all the equipment you need for an experiment and the knowledge to help extend the learning. 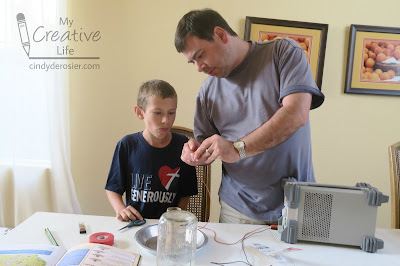 It works! That's a mechanical pencil lead burning in there. 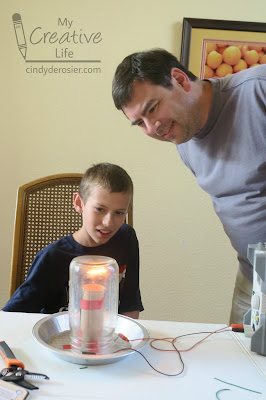 Trevor's light bulb burned brightly for about 10 seconds. Fun fact: My hometown of Livermore, California is home of the world's longest burning light bulb. It's been glowing for 117 years. 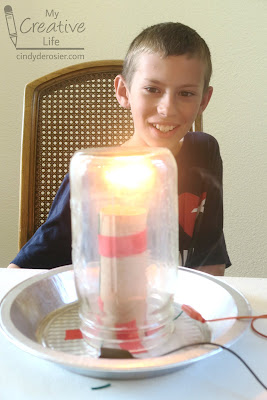 Trevor solved a maze about Daniel Boone's Wilderness Road, completed a story about Abraham Lincoln's childhood home, and read about the famous events in Kentucky history. We learned that Kentucky's state slogan is "United We Stand, Divided We Fall," that the happy birthday song was written by two sisters from Louisville, and that Joe Bowen set the world record for the longest distance traveled on stilts when he walked over 3000 miles from Los Angeles to his hometown of Bowen, Kentucky.

Not surprisingly, the recipe in the Kentucky State Journal was for fried chicken. Here's Trevor creating the breading for our chicken by measuring the ingredients directly into a paper bag. He'd never seen anything breaded like this! 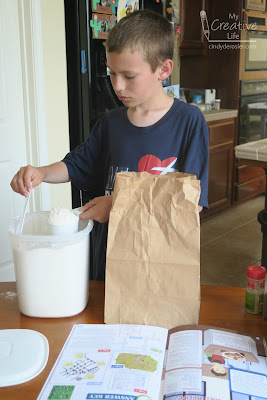 We had a great time exploring Kentucky through Little Passports. If anything, we're even more excited for our real-life adventures next month in the Bluegrass State! Thanks, Little Passports!