In addition to being a delicious cookie, Nutter Butters are fabulous for crafting. Over at Fun Family Crafts, we have around 20 adorable (and delicious!) Nutter Butter craft ideas, ranging from an alligator to acorns, from Frankenstein to football players. My favorite are the Nutter Butter cleats. And, of course, the bunnies. So cute.

I'd never crafted with Nutter Butters, so it was time to buy a package and give it a try. I challenged myself to see what I could make from Nutter Butters, candy eyeballs, Tootsie Rolls, sprinkles, and any other candy we had on hand. And because I love to stretch creatively, I upped the ante and decided I needed to craft human characters, then give them names and a backstory.

Nora is 26. She works as a veterinary assistant, which she finds very fulfilling. She's headed out on a quick jog through the park near her house before she heads to work. She enjoys this morning routine. It helps set the right tone for her day. 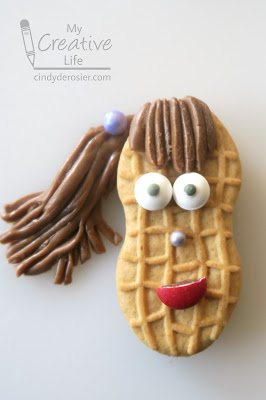 All the characters I made, including Nora, have a Nutter Butter face and candy eyeballs. Nora's hair is made from a Tootsie Roll. Use a sharp knife to cut the Tootsie Roll into planks, then into strips, just like you'd julienne a carrot. Stick them together and shape. Her ponytail holder and her nose are both sprinkles. Her mouth is half of an M&M. (They cut nicely if you use a sharp knife.)

Wade's passion is surfing, and yes, he's heard all the jokes about 'wading.' He doesn't mind though, and will chuckle whenever someone thinks they're the first to point it out. His personality is easygoing, but he works hard and he plays hard. He's headed to college soon, where he'll be studying journalism. 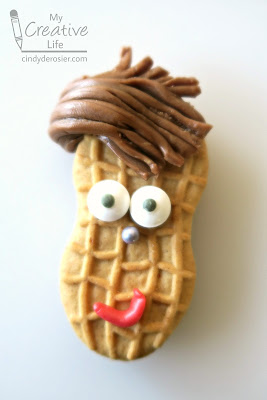 Wade's hair is Nora's ponytail, repurposed. They share a nose as well. Wade's mouth is a piece of cherry Starburst that I cut, rolled, and curved.

Brent is a 6th grade history teacher. He wears a mustache because otherwise he looks like a middle schooler himself, even though he's 31. He really enjoys his job and hopes to stay at the same school until he retires. No two days are ever the same as a teacher, which keeps him on his toes. 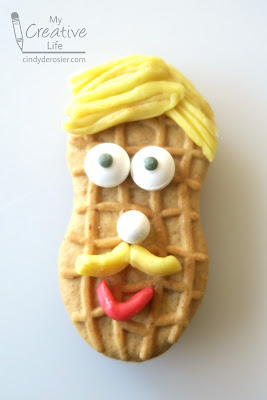 Brent's hair and mustache are made from a lemon Tootsie Roll. His nose is a sprinkle and his mouth is from the same cherry Starburst.

Geoffrey is a worrier. Always has been, always will be. He's 54 and works repairing photocopiers. Photocopiers always break down, so work is steady, but Geoffrey still manages to worry that soon technology will make him obsolete. 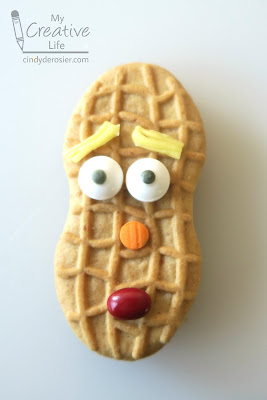 Geoffrey's eyebrows are made from Brent's mustache. His nose is a flat sprinkle (do the types of sprinkles have names?), and his mouth is a chocolate covered sunflower seed.

Arthur (aka Sparky the Clown)

His given name is Arthur, but only his mom has ever called him that. Everyone else called him Artie until a kid in middle school misheard and thought his name was Sparky. The nickname stuck. Sparky works as a clown at festivals, carnivals, and birthday parties. 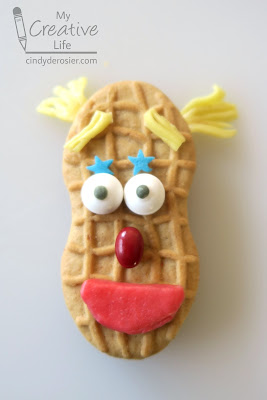 Sparky's eyebrows are the same as Geoffrey's, whose mouth became Sparky's nose. His hair is Brent's, cut down. His mouth is cut from a cherry Starburst and there are star-shaped sprinkles above his eyes.

Donovan is a quiet kid, content to stay in his room for hours practicing guitar or writing songs. Sometimes he feels invisible, like there's nothing about him that makes him stand out in a crowd. But that will change. He's a really talented musician and it's only a matter of time before the world notices him. 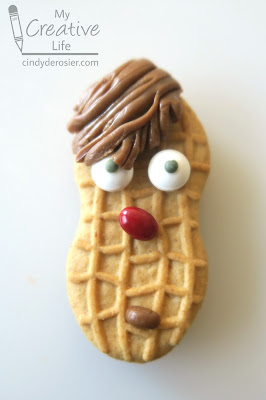 Donovan's hair is cut down from Wade's hair. His nose is Sparky's, turned 90 degrees. His mouth is a small piece of Tootsie Roll.


Lorraine did her hair and put on her favorite earrings before heading to the passport office. She's traveling for her new job soon, which will be her first time out of the country. She touched up her lipstick just before it was time to get her photo taken - why wouldn't they let her smile when they took her photo? 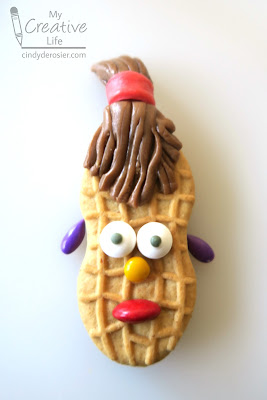 Lorraine's hair is Donovan's and Nora's rearranged, held in place by Sparky's smile. Her nose is a sprinkle and her earrings are chocolate covered sunflower seeds. Her mouth is Nora's, turned cut side down.

I had a blast creating these characters and dreaming up their backstories. Grab the kids and give it a try!
Email ThisBlogThis!Share to TwitterShare to FacebookShare to Pinterest
Labels: candy, clown, cookie, Crafts for Kids, edible, nutter butter