Technically, Trevor has been to New York. Our epic New England trip in 2014 ended in New York City, but we didn't do anything there except drive through it on the way to the airport to fly home. Fortunately, Trevor will have a proper visit to New York next spring when he takes a trip there with his school. In the meantime, Trevor and I had a lot of fun taking a virtual trip together through Little Passports! 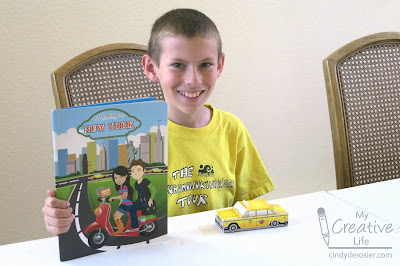 After building the model (a taxicab), we worked on an activity about transportation in New York. Next was a puzzle based on a famous bridge in New York. Then he solved a dot-to-dot to learn about the state animal. It's a beaver! Expect to see quite a few beaver-themed crafts from me in the upcoming months, for reasons I will explain later.

Next, we made an origami boat. This was inspired by the boats at Niagara Falls that get you close enough to the fastest waterfalls in the world so that you can feel the "mist" on your face. We did this during our trip, but from the Canada side instead of the US side. If you've taken this boat ride, you understand why I put "mist" in quotation marks. You can read about Trevor's interpretation of the "mist" here. 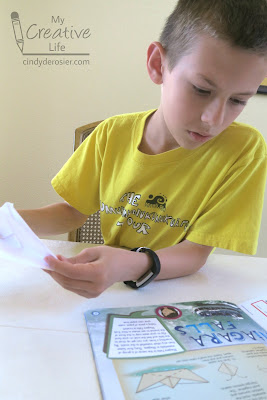 We read about Central Park and the many plants and animals that call it home. Then we searched for hidden letters in an illustration of Syracuse University's library. Next, science! There were three simple experiments based on static electricity. They were inspired by Joseph Henry (scientist, inventor, and first Secretary of the Smithsonian Institution), who was born in Albany, NY and contributed greatly to the development of modern electricity.

Next, we read about famous events in New York. Trevor was very interested in the 1902 entry depicting New York's first skyscraper, the Flatiron Building. He didn't agree that it is shaped like an iron (no matter how much I explained it to him), arguing that irons are never taller than they are wide. My literal child! 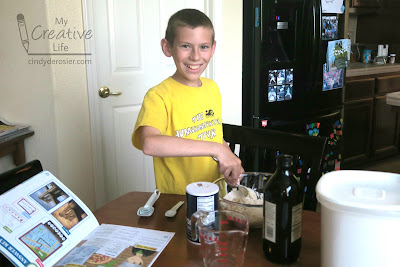 Trevor chose to leave half just cheese, and put yellow tomatoes and basil from our garden on the other half. It was fantastic. In fact, our family of three *might* have polished off the entire thing in mere minutes! 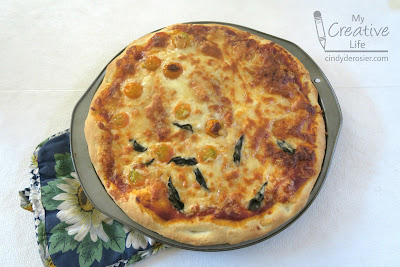 Trevor and I had a great time exploring New York through Little Passports and I am so excited for him to get to actually visit next spring. He's going to love it! I've been to New York five times and I've loved it more each time I've been.