This is my fifth post about our family's first trip to Europe. Read from the beginning starting here or check out the links to all the educational US travel we have done here.

We got to sleep in on Tuesday, April 9, as our ship didn't dock in Barcelona until noon. The rest was very nice, of course, but the downside was that we did not have nearly enough time to explore the city. And what a city! I liked every place we visited on this trip, but Barcelona is the one where I most felt like there was so much more left to discover.

We started our time in Barcelona with a walking tour. Our first stop was at the stunning La Sagrada Familia Basilica. 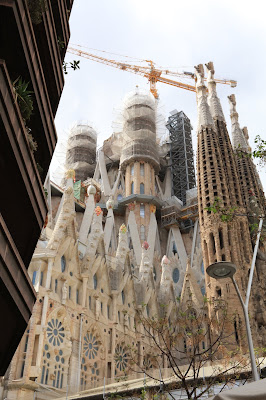 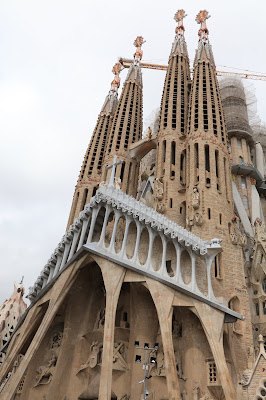 It's been under construction since 1882 and is almost done. "Almost" being relative, of course. Most of the structure is done and mainly details remain. 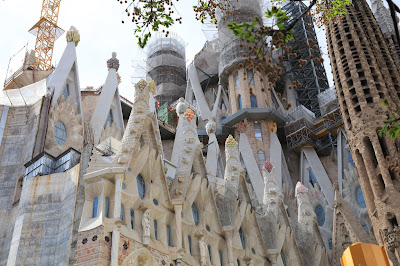 The level of detail in place is already amazing. 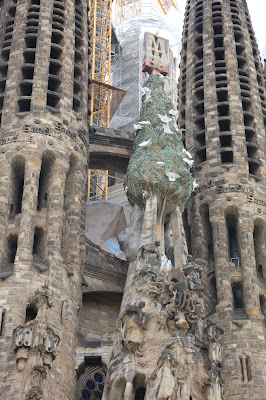 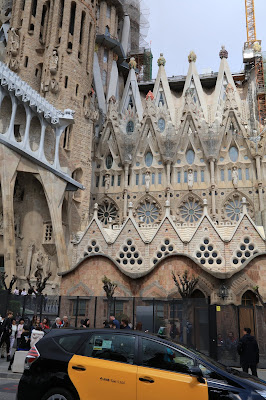 These spires are the latest addition. 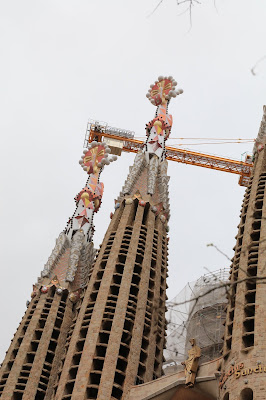 Next, we visited Barcelona's cathedral. 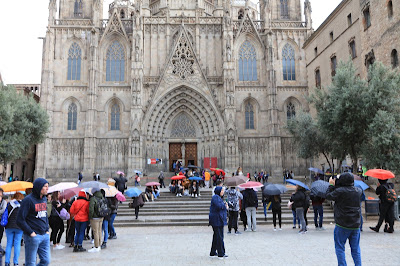 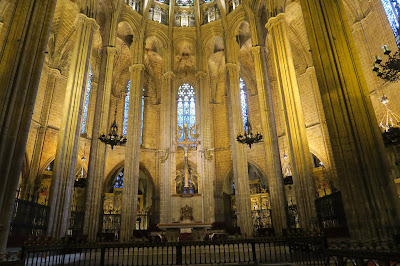 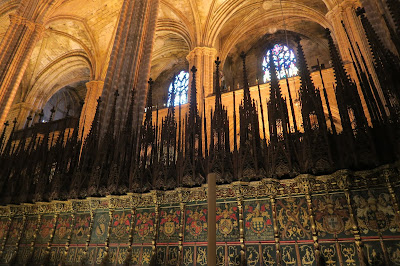 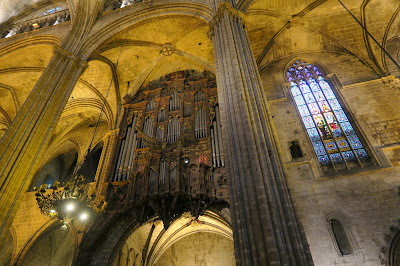 ... but the courtyard makes it unique. Why? 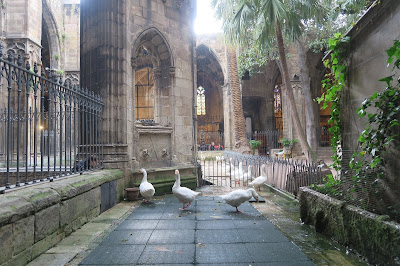 Geese. Thirteen of them. Why? Because the cathedral is dedicated to Eulalia of Barcelona, martyred at the age of 13 and subjected to thirteen tortures for refusing to renounce her faith. 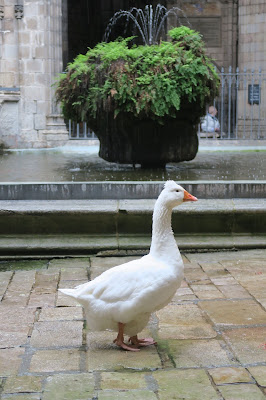 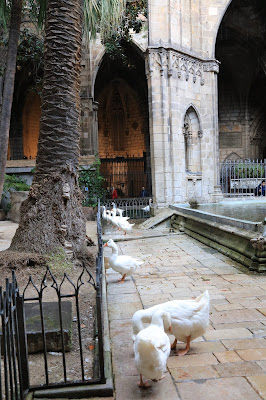 We continued our walk through the Spanish streets. Trevor took advantage of a brief bathroom stop to purchase Kas Limón. !Que delicioso! 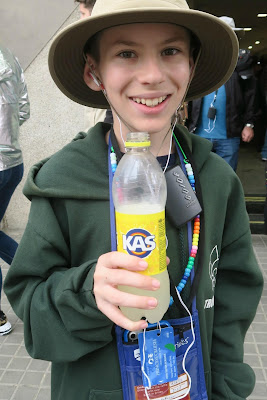 We walked through a shopping district, then swung by Els 4Gats. This cafe was a popular meeting place for Catalonian artists during the modernist period, including Pablo Picasso. 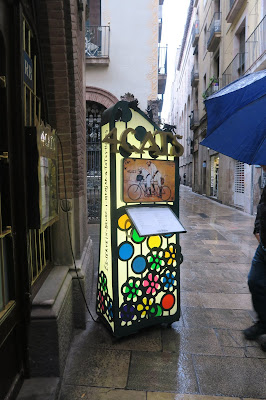 Speaking of Catalonia, our guide was extremely reluctant to answer questions about the many flags and banners we saw throughout the city, other than to say that the question of independence is very emotional for many. Our (rainy) walking tour ended and we boarded a bus. It took us to Montjuic where the Olympics took place in 1992. That was cool. 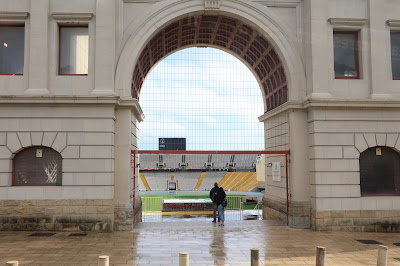 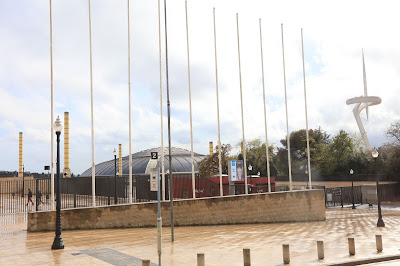 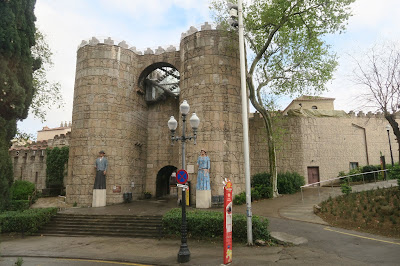 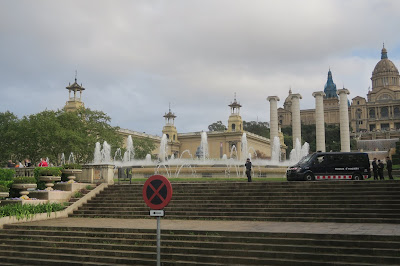 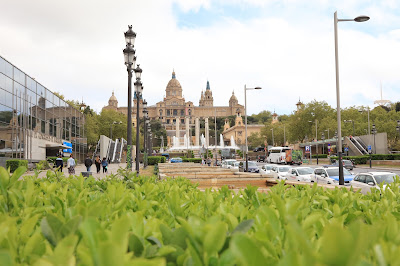 Trevor spotted this car from the bus. He is taking beginning Spanish this year and thought that Hoy-Voy was clever. 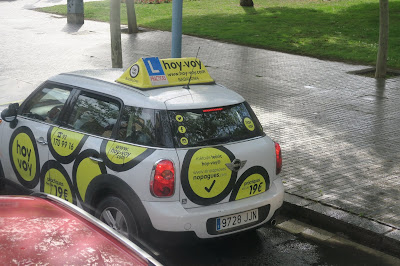 I had a lot of fun testing my own Spanish in Barcelona. I took two years of Spanish in junior high, four years in high school, passed the AP test, and then took a single Spanish class in college... which is to say that I used to speak Spanish fairly well, but haven't used it much in 25 years, so it's more than rusty. I couldn't read a lot of the signs, which was disappointing. But when we passed a bookstore with the word "llibre" instead of "libro," my disappointment turned to confusion. I asked our guide, who told me that many of the signs I'd been struggling to read were in Catalán and not Spanish. Whew! My Spanish is still horrible, but not quite as bad as I'd feared!

Thank goodness for cognates. We had no trouble translating "supermercat." We pronounced it Super Meerkat, because it's funnier that way. (Note to self: Design the costume that Super Meerkat would wear to fight crime in Barcelona.) 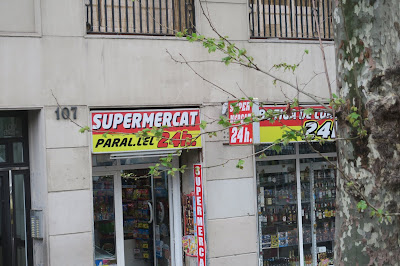 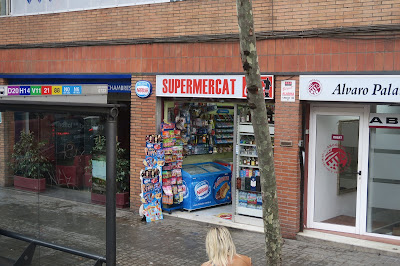 We had such a great time in Barcelona. All too soon it was time to set sail toward our next destination. But first, a sea day. We spent Wednesday, April 10th resting, relaxing, and enjoying everything the Sapphire Princess had to offer.
Email ThisBlogThis!Share to TwitterShare to FacebookShare to Pinterest
Labels: Europe, Spain, Steve, Trevor