As you know, the deRosiers are all about trying new foods and love any sort of taste test. So when Steve suggested we try Burger King's new Impossible Whopper and pit it against their standard Whopper, Trevor and I were all in. I can't remember the last time I had food from Burger King. I'd even forgotten what's on a Whopper (lettuce, tomatoes, pickles, white onions, ketchup, and mayo on a sesame seed bun). The Impossible Whopper is the same, but instead of a beef patty, the patty is entirely plant-based. 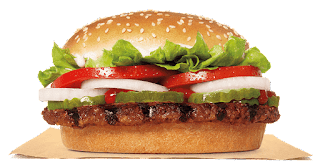 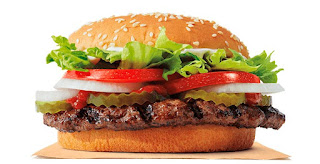 I'm sure it comes as no surprise to you that the burgers we actually received looked a little different than their styled version. Unlike the menu photos, neither of our Whoppers' patties was overhanging the lower bun and neither Whopper had the same amount or apparent quality of produce. They did, however, look very similar to each other. 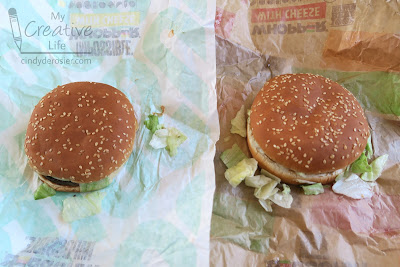 When I removed the top bun, we did notice some differences. The Impossible patty was clearly larger than the beef patty, extending all the way to the edges of the lower bun (but not overhanging, like the menu photo). The Impossible Whopper had more tomato and pickle slices than the regular Whopper, which had more onion. The lettuce and mayo were similar. Neither had visible ketchup. 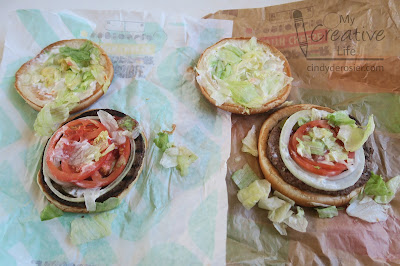 I cut each into pieces so we could taste them side-by-side. That's where things got interesting. 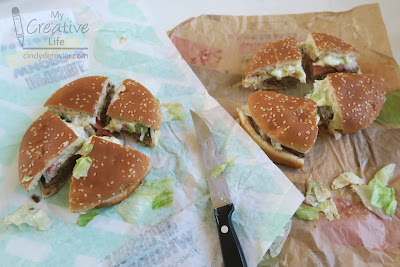 The two burgers tasted identical. There is no way we would have known we weren't eating two regular Whoppers when just biting into them with all the toppings. Interesting!

We carefully scraped away everything and tried just the patties side by side. Now, we could taste a difference. Not a big difference, and certainly not a meat-vs-not-meat difference. While they were a tiny bit different, none of us had a strong preference between them based on flavor or texture.

There's one other difference between the two, which is the price. The Impossible Whopper costs about a dollar more than a Whopper, at least for now during their trial release.

So what conclusion did we reach? All of us enjoyed the Impossible patty and could see getting it again in the future, particularly if it were to make an appearance at our preferred burger places. We like the idea of eating less meat and are glad to see better, more meat-like substitutes being developed. But the Impossible Whopper is far from a healthy choice.

Have you tried the Impossible Whopper? I'd love to hear what you think!
Email ThisBlogThis!Share to TwitterShare to FacebookShare to Pinterest
Labels: hamburger, taste test