Here's the next page from our April adventures in Europe: 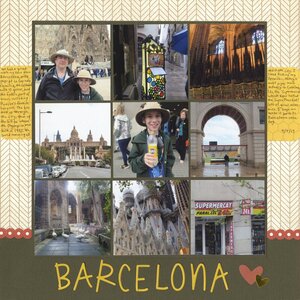 
As always, the first step in making the page was narrowing down which photos to use. It was raining when we were in Barcelona, so we took significantly fewer photos than in other cities. That should have made it easier, but it was actually the opposite. I struggled to find pictures to represent the breadth of what we did. I finally narrowed it down to these nine. I chose yellow and red for this layout to reflect the colors of both the Spanish and Catalonian flags. I had to use tiny writing to fit everything I wanted to say into the two small journaling blocks, but I managed!
Email ThisBlogThis!Share to TwitterShare to FacebookShare to Pinterest
Labels: Europe, Layouts, Spain, Steve, Trevor