This year, Trevor dressed as a Pez dispenser for Halloween. 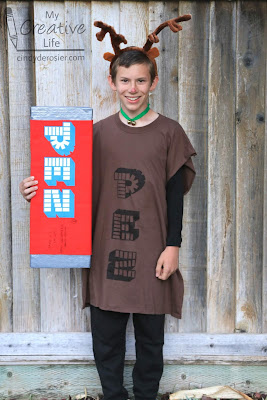 Specifically, he was this reindeer Pez dispenser. 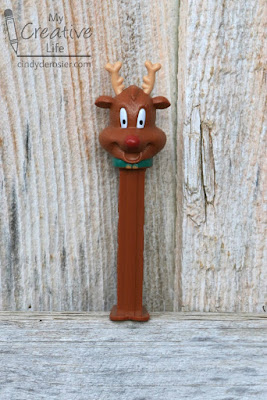 A perfect resemblance, no? 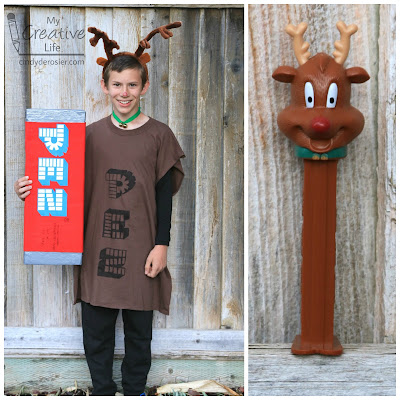 I made 95% of the costume during the power outage. No glue gun, sewing machine, or artificial light for me! Given the choice, I recommend electricity. Affiliate links below.

Remove the sleeves from the t-shirt. Print out PEZ and put it under the t-shirt on the light table. Carefully trace the letters onto the shirt. (Yea, electricity!) 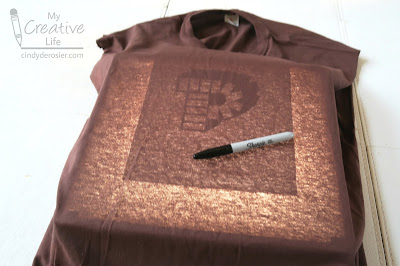 Cut the styrofoam so that it has the same proportions as a package of Pez. Ideally, you should use a foam cutter. I used a steak knife, which is really messy. (As an added bonus, you can't vacuum without electricity and trying to sweep up staticky bits is impossible. I shouldn't have done this indoors, but hindsight is 20-20.)

Wrap the ends with duct tape. 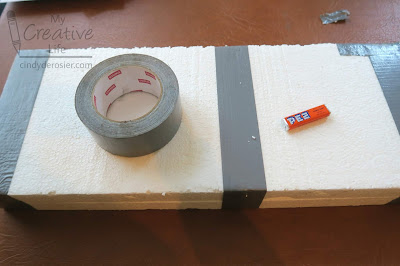 Wrap the felt around the middle of the Pez package, leaving the silver edges exposed. Glue it in place with the FabriTac. Print out PEZ in blue, cut out the letters, then glue them to the fabric. Use the Sharpie to write the other information onto the Pez package. I wrote exactly what was on the actual Pez container, except I changed the net weight to the weight of the styrofoam prop.

Measure a piece of ribbon to fit around your neck, add an extra inch, then cut. Sew the snaps onto the ends, then sew the bells to the front center.

After you're dressed, add a red reindeer nose using face paint. (Fun fact: This is the very first time Trevor has worn face paint. All his life, he has refused face paint, temporary tattoos, and anything similar. I only put the tiniest amount on to give him a red nose. He hated it, but was cooperative for the pictures.) 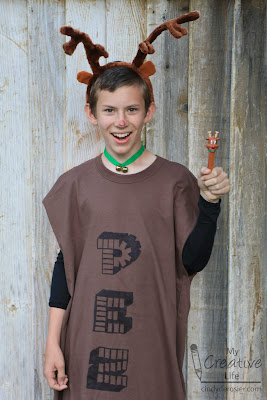 Due to the insanity that was our life last week, Trevor tried on his costume for the first time about 30 minutes before his friends showed up to trick-or-treat. If he'd tried it on sooner, I would have made some changes. I would have altered the shirt to make it narrower to more closely mimic the shape of the Pez dispenser, plus added a rigid piece to define the rectangular shape. Brown sweatpants would have helped the look too. But even without those improvements, both Trevor and I were happy with how it turned out. And we all had an awesome Halloween.
Email ThisBlogThis!Share to TwitterShare to FacebookShare to Pinterest
Labels: costume, felt, foam, Halloween, pez, reindeer, ribbon, t-shirt, Trevor