As Presidents' Day nears, I've come across a lot of crafts inspired by Mount Rushmore. Most of them involve gluing coins or doing rubbings of coins on paper to represent the four presidents carved into the iconic monument in South Dakota. Unfortunately, only three of the four presidents at Mount Rushmore actually appear on United States coins. Very few people mention in their tutorials that they are portraying the wrong man. As for the rest, I don't know if it's worse if they don't know they have the wrong person, or they know they do and are pretending they don't.
Here's an idea for a project inspired by Mount Rushmore that not only identifies the presidents correctly, but teaches the reason why each was selected for the carving. Before reading any further, read the clues and see if you know the faces of Mount Rushmore! Affiliate links below. 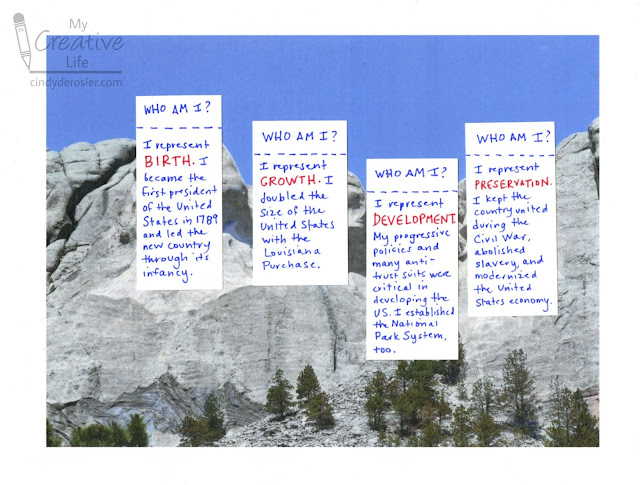 Print out the photo of Mount Rushmore so that it fills most of a sheet of paper. Trim two index cards into 3" x 1.5" pieces. (Adjust the size if your printout is significantly larger or smaller than mine.)
Score each index card at 0.5" to form the flaps. 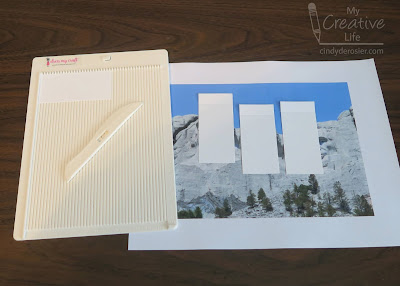 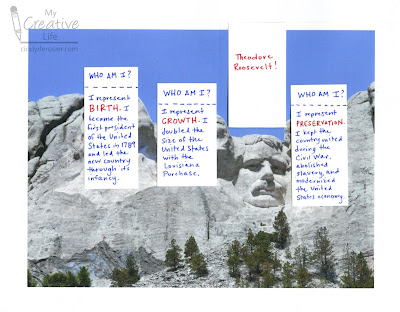 Apply adhesive to the back side of the tabs and place each clue over the proper face. Be sure that the face is fully covered and that it will be fully revealed when you lift the tab. 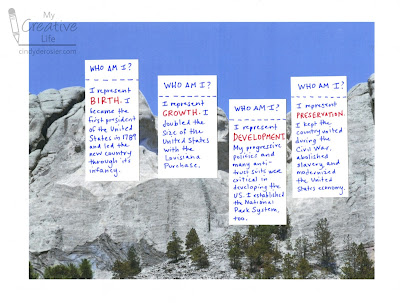 Here's a fun fact for you for Presidents' Day from History.com:

Presidents' Day never falls on the actual birthday of any American president! Four presidents (George Washington, William Henry Harrison, Abraham Lincoln and Ronald Reagan) were born in February, but their birthdays all come either too early or late to coincide with Presidents' Day, which is always celebrated on the third Monday of the month.
Email ThisBlogThis!Share to TwitterShare to FacebookShare to Pinterest
Labels: Crafts for Kids, Mount Rushmore, patriotic, South Dakota