Back in December, my iPad keyboard case broke. This was super annoying for a number of reasons, the most obnoxious of which was that I no longer had a way to keep the iPad perfectly vertical for Zoom meetings. I can't replace the keyboard case because my iPad is apparently considered a prehistoric artifact, no longer worthy of accessories.
For the last three months, I've been using a variety of creative hacks to keep my iPad vertical for Zoom meetings. Success has varied. It was time for a better solution, so I started researching tablet stand holders. I narrowed the choices down to two and was agonizing between them. I asked Steve for his opinion, which was: "Why don't you just get both? They're not expensive and if you like both, you can leave one upstairs and one downstairs. If you hate one, you can return it." So that's what I did. I purchased the PWR+ 360 Degree Swivel Adjustable Tablet and Cell Phone Holder (left) and the Lamicall 360 Degree Rotating Adjustable Desktop Stand (right). Affiliate links here and throughout the post.
My two tablet stand holders arrived together. The PWR+ came in one piece, while the Lamicall came in three pieces that needed to be put together. It took about 5 seconds and required no tools. The PWR+ weighs a little over 3 pounds and the Lamicall is a little over 2 pounds. Both are very sturdy and well-made. The PWR+ fits all devices between 4-11", while the Lamicall holds devices that are 4.7-13". 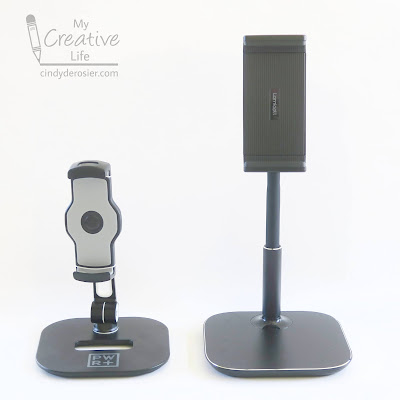 You can see the differences between them better from the back view. The base and the top of the PWR+ each adjust 360° and the arm rotates 150°. The Lamicall has a gooseneck design with 360° rotation. Both adjust easily. 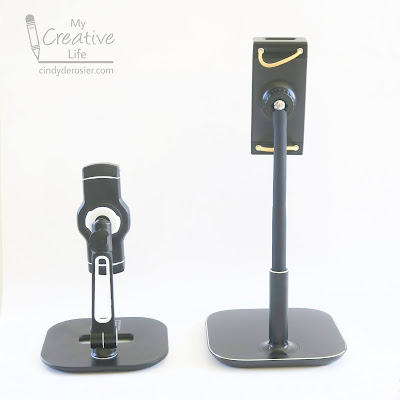 The true test, of course, is how they perform while holding devices. I tested each holder with both my iPhone and my iPad. My goal was to compare how easy it is to get the device in and out of the stand, how easy it is to adjust the angles, how securely each device is held, and how well the stands maintain their position without slumping or slipping. 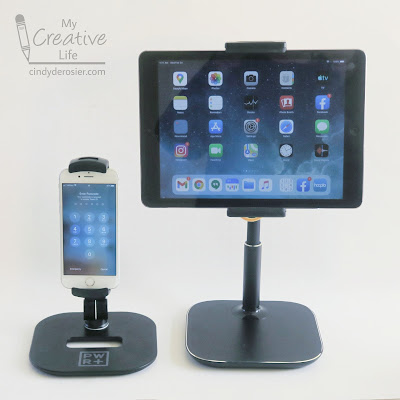 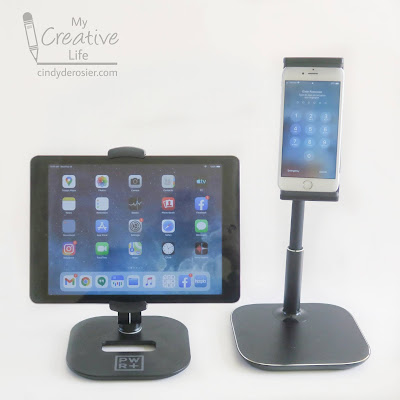 Honestly, each did a great job. I would say it is slightly easier to put the device into the PWR+ and slightly easier to remove it from the Lamicall, but hardly enough to make a difference. Each holds both devices securely and is easy to adjust. Neither one slumped or sagged after a full day holding an iPad. I slightly prefer the Lamicall for my main desk and the PWR+ for my craft table, but that's simply because of the height differences between my chairs and the work surfaces. Other than that, I don't prefer one over the other. I'm very happy with both.
I decided to send my mom a tablet stand holder for her birthday (which is today - Happy birthday, Mom!) to use for her eReader or Zoom meetings when she doesn't want to be at her desktop computer. Unlike me, she doesn't have a two-story house and definitely doesn't need two stands, so I had to decide between them. I went back and forth, but ultimately picked the PWR+ primarily because she could use it straight out of the box, without having to spend the 5 seconds on assembly. I'm sure she'll find plenty of uses for it.
If you're in the market for a tablet stand holder, I think you'll be happy with either the PWR+ or the Lamicall. If you get one, or already have one, let me know what you think of it!
Posted by Cindy deRosier at 5:00 AM