The title of this post might be a bit misleading, if you interpreted "our" to mean California. While we Californians have many state symbols of which to be proud, we do not have a state beverage. This puts us in the minority, as 28 of the 50 states have named an official state beverage. Of those 28, there are 20 states which have designated milk as their state beverage.
I discovered this while researching North Dakota in an attempt to finally fulfill my 2019 goal of creating at least two kid-friendly crafts inspired by each of the fifty states. North Dakota elevated milk to state symbol status in 1983, so I made a milk craft. 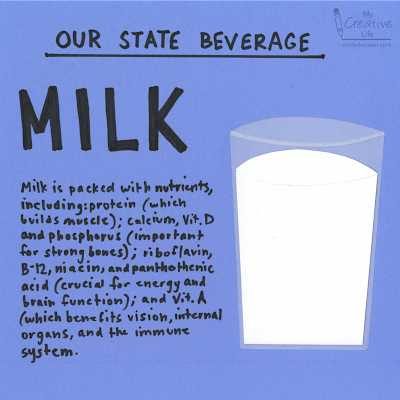 This craft is equally suitable for those of you in Arkansas, Delaware, Kentucky, Louisiana, Maryland, Minnesota, Mississippi, Nebraska, New York, North Carolina, Oklahoma, Oregon, Pennsylvania, South Carolina, South Dakota, Tennessee, Vermont, Virginia, and Wisconsin.
And with the completion of this craft, I'm thrilled to announce that I have now officially met my goal of two crafts per state! In fact, I just counted up the state-inspired tutorials and discovered I have an average of 4.3 crafts per state, with Hawaii (14), Louisiana (11), and Alaska (8) having the most. Affiliate links below.
---------

Fill a clear glass with milk and observe it from the side. Notice how the milk has a slight curve at the surface? This is called a meniscus. To make your milk craft look dimensional, you'll be mimicking the curve of the meniscus when you cut out the cardstock and vellum.
Use the vellum to cut out a glass with a concave top that is similar to that of your actual glass of milk. Then cut out a piece of vellum that matches that same curve on the top and the bottom, as shown below. I cut my pieces freehand, but it is much easier to cut a template and trace it to get a consistent curve.
Next, cut white cardstock to make a column of milk that is slightly smaller than the vellum glass. It doesn't need to have a concave top (but it can). Cut out the top piece, trying to match the curves of the vellum. (Again, a template would help. Mine aren't as even as they could/should be.) 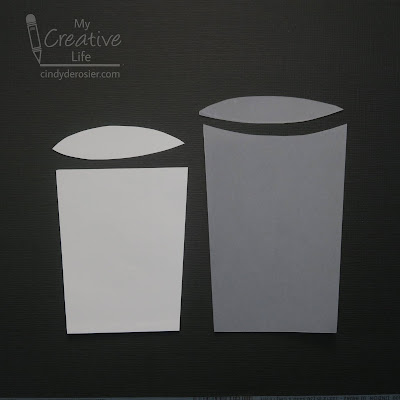 Use your finger to run a tiny bit of glue along the convex edge of the larger vellum piece, then adhere the smaller piece, making sure the overlap is both even and as small as possible. Now glue the larger piece of white cardstock to the vellum and the smaller piece of white cardstock on top of that. Glue the glass of milk to the background paper, taking care to put the glue only in places where the cardstock overlaps the vellum so that the glue is hidden.
Use the pen to title your background paper. Then write the text:

Milk is packed with nutrients, including: protein (which builds muscle); calcium, vitamin D, and phosphorus (important for strong bones); riboflavin, B-12, niacin, and panthothenic acid (crucial for energy and brain function); and vitamin A (which benefits vision, internal organs, and the immune system).

---------
You might be wondering about the other state beverages. Ohio was actually the first to designate a state beverage back in 1965, when it bestowed the honor on tomato juice. 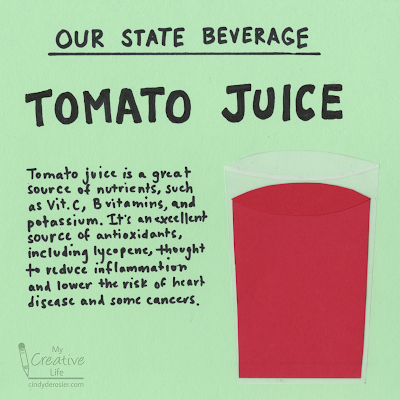 Follow the same directions as making the milk project, but substitute red cardstock for white. For the text, write:

Tomato juice is a great source of nutrients, such as vitamin C, B vitamins, and potassium. It's an excellent source of antioxidants, including lycopene, thought to reduce inflammation and lower the risk of heart disease and some cancers.

---------
Floridians, your state beverage is orange juice - no surprise there! It became official in 1967, the second state to name an official beverage. 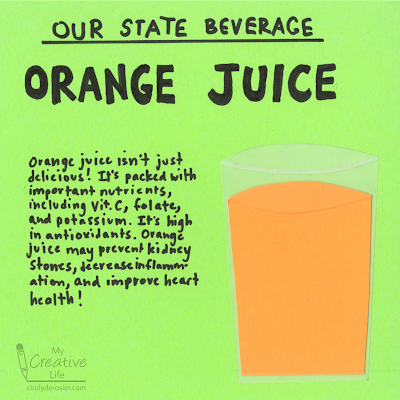 Again, follow the same directions, replacing the white cardstock with orange. For the text, write: 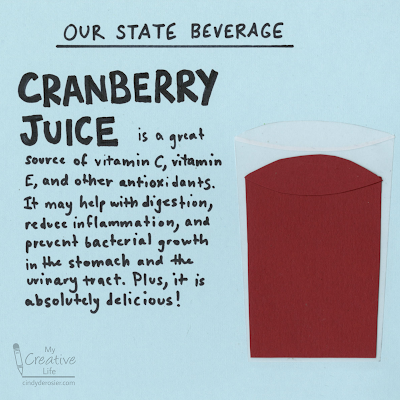 Follow the same directions as above, substituting a dark red for the white cardstock. For the text, write:

Cranberry juice is a great source of vitamin C, vitamin E, and other antioxidants. It may help with digestion, reduce inflammation, and prevent bacterial growth in the stomach and urinary tract. Plus, it is absolutely delicious! 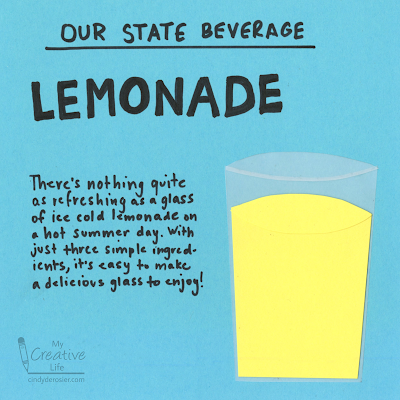 Substitute yellow cardstock for the white in the directions above. For the text, write:

There's nothing quite as refreshing as a glass of ice cold lemonade on a hot summer day. With just three simple ingredients, it's easy to make a delicious glass to enjoy!

---------
The most detail-oriented among you may have noticed that I've accounted for 24 of the 28 states with state beverages. I left out Alabama, as they selected an alcoholic beverage, which is not the best choice for a kids' craft. As for the others, I'll probably make an apple cider craft for New Hampshire eventually, but I think that belongs in a mug, not represented in vellum. I've never had Maine's Moxie nor Rhode Island's coffee milk. For the record, four of the states who named milk as their state beverage also have a second state drink. Check out the full list of state beverages - it's very interesting!
Posted by Cindy deRosier at 5:00 AM
Email ThisBlogThis!Share to TwitterShare to FacebookShare to Pinterest
Labels: Arkansas, Delaware, Kentucky, Louisiana, Maryland, Minnesota, Mississippi, Nebraska, New York, North Carolina, North Dakota, Oklahoma, Oregon, pennsylvania, South Carolina, South Dakota, Tennessee, Vermont, Virginia