One of the primary differences between Cub Scouts and Scouts BSA (previously known as Boy Scouts) is that Cub packs are adult-led while troops are Scout-led. A team of adults (including the Scoutmaster, who is the most visible) work to support the Scouts, but much of how a troop is run depends on the youth leadership.
Scout troops are divided into patrols, groups of 6-8 boys who elect a Patrol Leader. One Scout is elected as Senior Patrol Leader. He, with help from an Assistant Senior Patrol Leader, is in charge of the troop as a whole. Having a good SPL makes a huge difference in how a troop operates.
Trevor was elected SPL for a 6-month term starting March 1. Most of the leadership he's provided has been via Zoom (although we returned to in-person meetings this week!), but he's done two in-person outings. The photos below are from a map skills and orienteering event held at Briones Regional Park. 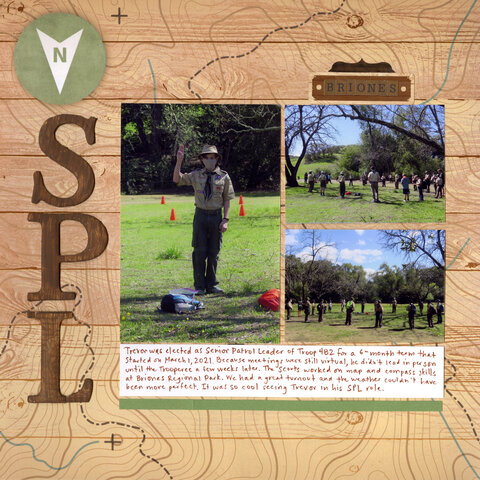 This topo map paper from Scrapbook Customs couldn't be more perfect! It's designed so that the North arrow points up, but I opted to turn the paper 180° so that the arrow would point to the title. Fortunately, a capital N has vertical symmetry and so it works perfectly.

I'm entering this layout in the Big Ol' Title challenge by Victoria Marie Designs. I had to do a bit of surgery to make the L. It's actually an I with the tail of a Z. It's not the only place I had to 'make it work.' The green paper I wanted to put below the journaling wasn't long enough, so I pieced two strips together. You can see the seam almost directly down from Trevor's feet. In addition to helping set the theme, the busy background paper does a great job of distracting from both of these flaws.
Posted by Cindy deRosier at 5:00 AM