Twenty years ago, I earned a Master of Education in Educational Leadership. I was teaching full-time and attending classes in the evening. It was challenging and didn't leave much time for anything else. Exactly twenty years later, my youngest cousin earned exactly the same degree. Tim also taught full-time during his masters program. However, while I was single and childless during the entire time I was working on my degree, Tim was married with three school-age boys... all of whom were doing remote school at home during a pandemic while Tim was teaching and taking classes remotely. Though we emerged with the same piece of paper (in similar red diploma holders), there's no question to me who had the more difficult route to the same end. Much respect to you, Tim! 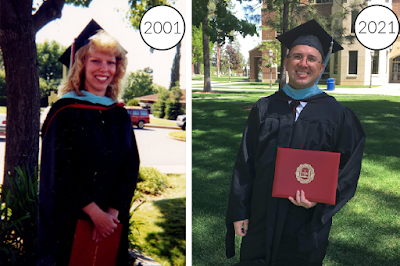 I've been going through files from my teaching days, and I used one of my student's samples as the inspiration for the card I made for Tim. First, an explanation. Each year, I shared one of my favorite picture books, Grandfather Tang's Story (affiliate link) with my students. In this beautiful book, a man tells his granddaughter a magical story featuring clever animals and true friends. As he tells the story, he arranges the pieces of a tangram to illustrate it. As I read, I arranged the pieces of a tangram on my overhead project (20 years ago, remember?) with a piece of paper blocking the lightbulb. At just the right moment, I would lift the paper to reveal Grandfather Tang's next creation, then the students would rush to make the same creature using their own tangram. After the story was over, the kids had time to create their own tangram design. It was so much fun and I loved seeing their creativity.
I kept some of my favorite tangram designs to show future classes as examples, including this adorable "Dog in a Box for a Gift!" by Lauren.... 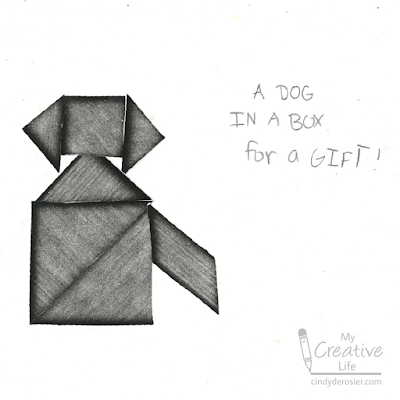 ... and this "Graduate Person" by Nicole. 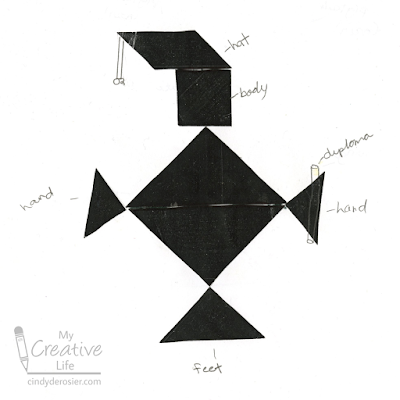 Nicole included the following "explanation" at the bottom of her artwork:

"I made this because I might graduate this year from elementary school (Glen Cove). I'm excited to graduate and move on also to learn more. Even though I wanted to stay at this age, I'm curious about the world. I also want to graduate from every school I go to so I want to graduate. I want to do these things because I want to be smart."
All these years later, it still tickles me that Nicole thought she "might" graduate from elementary school. She was a top-notch student who took school seriously and tried her best with everything she did. Her classroom behavior was perfect. The idea that she would somehow fail 5th grade and not graduate from elementary school was absurd. (Spoiler: Nicole successfully completed 5th grade and has graduated several more times since then.)
I took the basic idea from Nicole's "Graduate Person" and used it to make this card, currently in the mail headed north to my cousin, Tim. 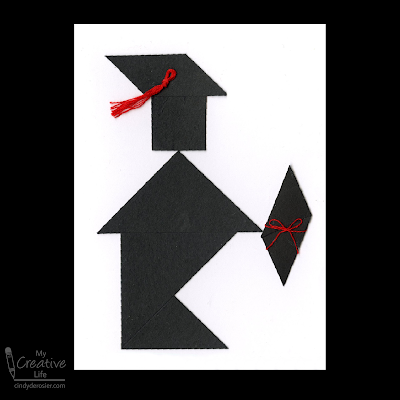 With the card base oriented vertically, arrange the tangram pieces to form the graduate. The parallelogram is the cap, the square is the head, the two large triangles make the body, the medium triangle is the feet, and the two small triangles make the diploma.
When you are happy with the placement, glue all the pieces down EXCEPT the diploma triangles. Separate a single strand of embroidery floss in the appropriate school color, lay it horizontally where the diploma will go, then glue the diploma pieces on top of it. Let the glue dry.
Tie a bow around the diploma, then trim off the excess.
Use the remaining 5 strands of embroidery floss to make a tassel. Fold the floss in half (so that the tassel will have 10 strands), then tie an overhand knot near the folded end to make a tiny loop. Glue that loop to the top of the mortarboard, then trim off the extra length.
Email ThisBlogThis!Share to TwitterShare to FacebookShare to Pinterest
Labels: Cards, Crafts for Kids, Graduation, My Teaching Days, tangram