As part of my coloring art class, I've been learning more about colored pencils. The first and most important lesson I learned is that not every pencil with color inside is a colored pencil. A true colored pencil has a binder that holds the pigment. The binder is either wax-based or oil-based. This article does an excellent job of explaining the pros and cons of each. I also learned that the type of pigment, as well as the binder-to-pigment ratio, affects the pencil's quality.

I have a lot of colored pencils. Most came to me as samples or gifts. Except for a few sets I've kept intact (like the World Colors set by Faber-Castell), I've just tossed all the pencils into a single container. It hadn't occurred to me that mixing brands (and thus, binder types and pigment ratios) could matter. I didn't know if the colored pencils I had were wax- or oil-based. All I knew is that my favorite colored pencils, the ones I reached for most often, were the Eagle Prismacolors I had as a kid that are now stubs despite my attempts to use them only on the most special projects.

Since I was completely ignorant about what I had, I thought the best thing to do would be to create swatches, see what I liked best, and then find out whether those were oil- or wax-based. Along the way, I made some very interesting discoveries.

Here's my first page of swatches, where I started with what I was guessing were the higher-quality colored pencils. Other than my 8 remaining stubby Eagle Prismacolors, I only have 1-3 of each of the others since they were all samples. 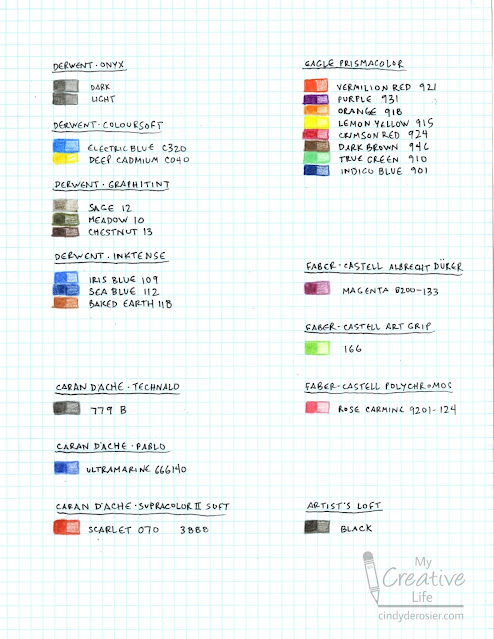 Comparing them like this was very enlightening. My favorites (besides the Prismacolors) were the Derwent Coloursofts, the Caran d'Ache Pablo, and the Faber-Castell Polychromos because of the color intensity, creamy application, and ease of coloring. (I've added affiliate links to these and all the other colored pencils I liked.) It turns out the first is wax-based and the last two oil-based. It also turns out that some of what I thought were colored pencils are actually water-soluble! This includes the Derwent Graphitint, Derwent Inktense, and Faber-Castell Albrecht Durer. Now that I know, I've moved them to my watercolor pencil collection. I also learned that the Inktense pencils dry permanent, so they can also be used on fabric. Very cool!
Here's my next set of swatches. 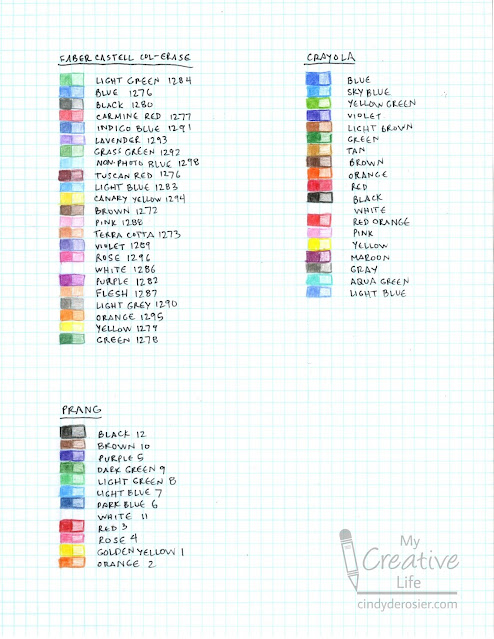 Again, this was very enlightening. After coloring with so many great pencils, I hated using the Faber-Castell Col-Erase pencils so much I immediately put them in a donation box. I'm sure someone else will appreciate that they are erasable, but I had to press so hard to fully color in the tiny boxes on the graph paper that they made my hand hurt. No thanks!
I was happy with both the Prang and the Crayola sets. They are wax-based, kid-quality colored pencils that definitely have a place in my craft room, along with the Faber-Castell World Colors. I've moved them to a separate container from the artist-quality colored pencils.
My next swatches were of a premium white-label set from Leisure Arts. 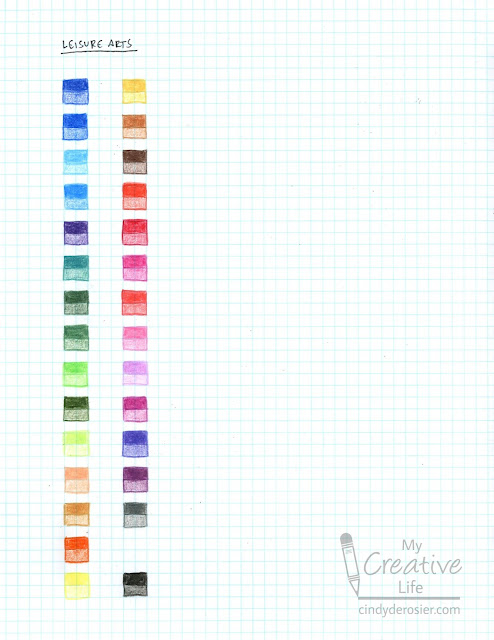 The fact that they don't have color names or numbers on the pencils makes me think they're a lower-end brand, but they perform beautifully, with vibrant color that's easy to blend. I searched everywhere to see if I could discover anything about them, particularly the manufacturer and the binder type. Nope. It remains a mystery. All I know is that they're delightful to use and have earned a place with my higher-end colored pencils.
My final swatch chart was for the newest colored pencils in my collection. I made my first-ever in-person visit to Blick and came home with these 36 Prismacolor Premiers. I love them so much! 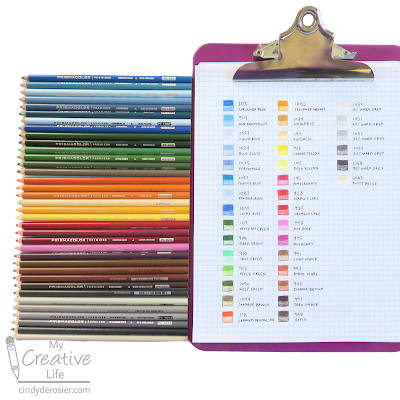 I can't find a clearcut answer about how many colors there are in all, but 150 is the largest set. I tried to do some research to learn about the numbering system, but wasn't successful. All the pencils are in the 100's, 900's, or 1000's. Where are the single- and double-digits, as well as everything from 200-899? Another mystery. Regardless, there seem to be at least another 114 colored pencils for me to eventually own. #CraftGoals!
Email ThisBlogThis!Share to TwitterShare to FacebookShare to Pinterest
Labels: colored pencil, Prismacolor