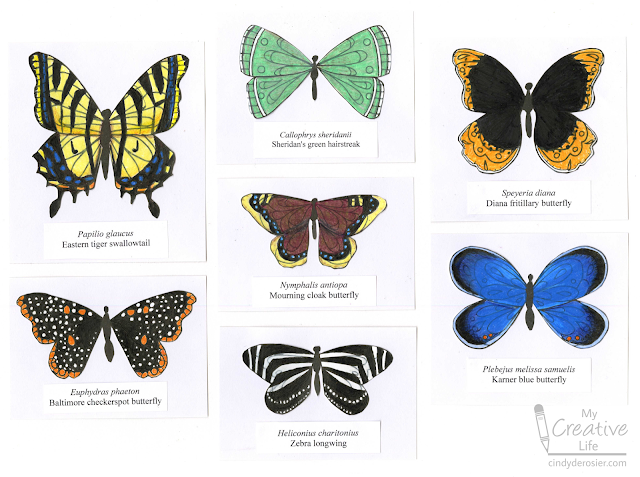 In retrospect, I made things WAY harder for myself than necessary. Rather than drawing the butterflies myself, or printing out line drawings, I used a black pen to alter an existing coloring page from a Leisure Arts coloring book (affiliate link). I went through all the state butterflies and the seven drawings on the coloring page to decide which images would work for which butterflies. Then I started blacking in the changes. It was very tedious and took much (MUCH) longer than drawing them would have. Not to mention, I was left with lines from the original designs that didn't belong. Nevertheless, I pushed on.
Here you can see that I've begun altering the butterfly on the bottom right of the page. I'd originally started to change it into an Oregon swallowtail (which is why you see "Oregon" written above it) but I ended up making the similar Eastern tiger swallowtail. You can see in my notes that I planned to turn the butterfly directly above the sentiment into "Arkansas or Colorado." I went with Arkansas' Diana fritillary butterfly. 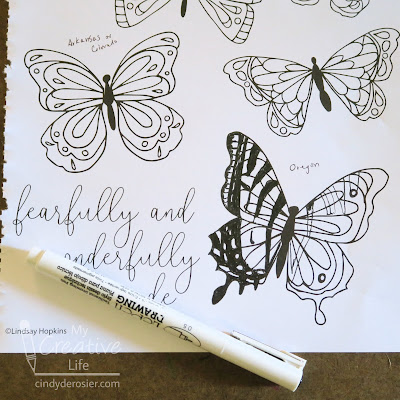 Here are each of the butterflies fully colored, along with my notes. You can also see a few places where I swatched my colored pencils. 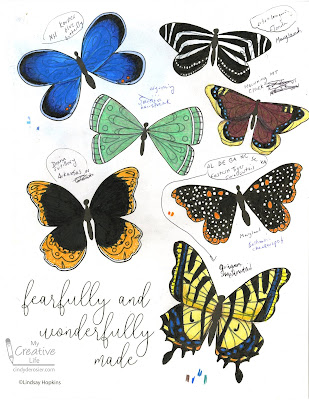 The next step was fussy-cutting all the butterflies. That took awhile, too. 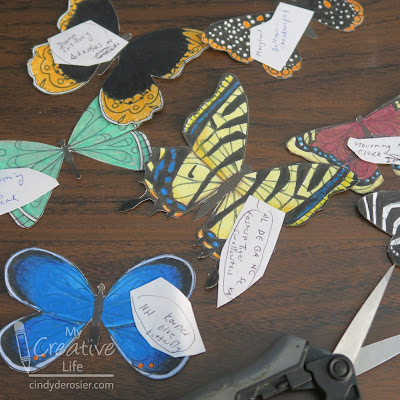 Finally, I mounted each butterfly on white cardstock and added a typed label with the scientific name and the common name. I love the way the butterflies all look together.

This was a challenging project that taught me a lot. Someday I might redo these (drawing them by hand instead of starting with lines that shouldn't be there) and adding in the remaining state butterflies. But it's not going to be anytime soon. I'm officially taking a butterfly break.
Email ThisBlogThis!Share to TwitterShare to FacebookShare to Pinterest
Labels: Alabama, Arkansas, butterfly, colored pencil, Coloring book, Crafts for Kids, Delaware, Florida, Georgia, Maryland, Montana, New Hampshire, North Carolina, Prismacolor, South Carolina, state insect, Virginia, Wyoming