Smores aren't just for summer. Nor are they just for camping. They are just as appropriate indoors for Halloween. Evidence: 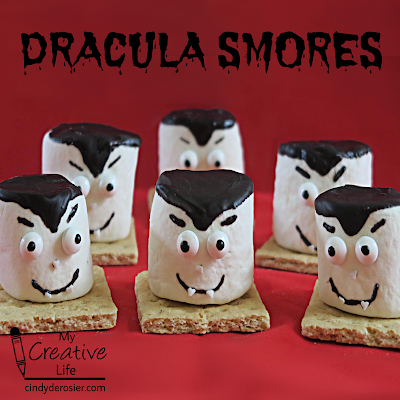 I had so much fun making these! They came out exactly how I'd hoped. Affiliate links and cooking suggestions below.

Prepare the Candy Melts according to the package directions. You'll need about 1.5 discs per finished smore. (I used 8 discs for 6 smores and it was just right.)
Dip the top of each marshmallow into the melted candy, then turn it to allow the candy to start to drip down one side to make Dracula's famous widow's peak. Stop the dripping by turning it upside down again. Within 20 seconds or so, it will firm up enough not to drip anymore. 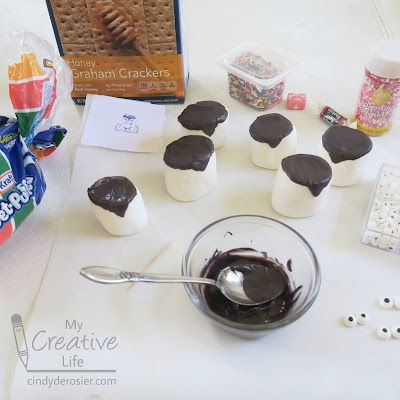 Use a toothpick to dab a small amount of melted candy to the back of the candy eyeballs and place them on the face. The dip the end of the toothpick in candy and press it to the marshmallow, just above the eyes, to make the eyebrows. 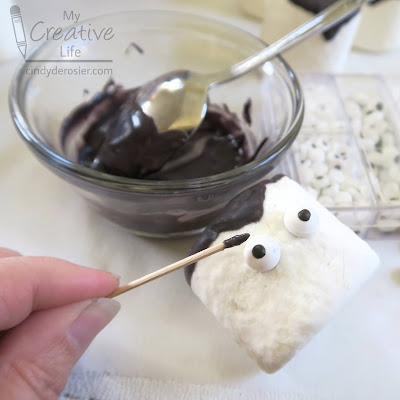 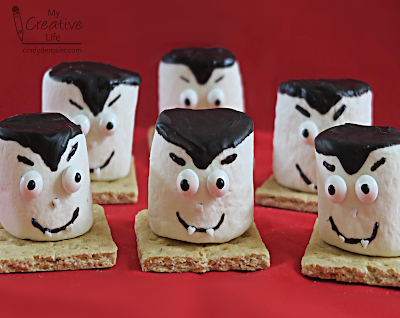 Experiment 1: Microwave.
I set one smore on a plate and put it into the oven for 45 seconds at 50% power. As expected, it puffed up huge. I didn't not expect the eyeballs to pop off, nor for the face to basically melt away. 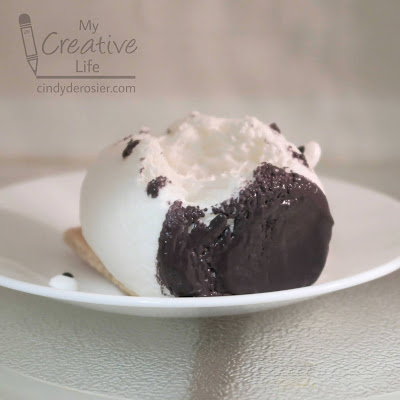 Verdict: Quick, and easy, but with no browning it's missing most of what's good about smores. Not to mention, the end result is decidedly not adorable.  2/10
Experiment 2: Stovetop.
I poked a skewer into a Dracula and heated it over the stovetop, attempting to get a perfectly-golden toast while not letting anything drip or drop into the stove and make a huge mess. 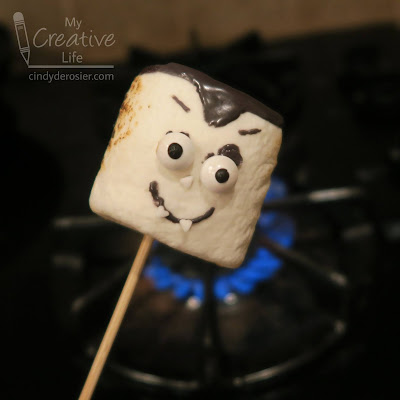 Verdict: Not as quick and easy as the microwave, and definitely less safe. The eyes slid a bit despite my efforts to keep that side up. The back of the marshmallow got some nice browning and I was able to get some gooey melting going on.  5/10
Experiment 3: Toaster Oven.
I must have been feeling confident, because I put two smores on foil into the toaster oven with the setting on TOAST. Within 30 seconds, their eyes started sliding downhill and their tops were bubbling... 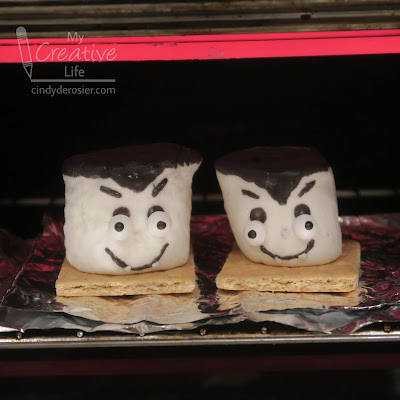 ... so I took them out, laid them on their backs, and put the eyeballs back where they belonged. Then I slid them back into the toaster oven. 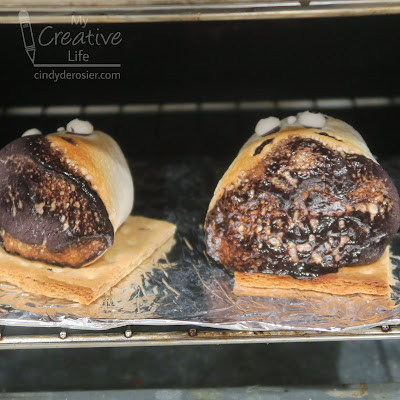 When their faces had a decent tan, I took them out and set them back up on their graham crackers. 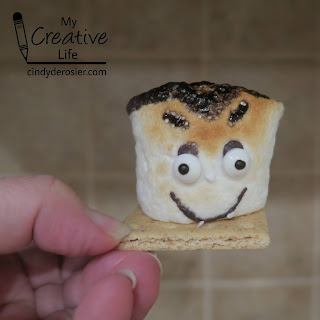 Verdict: This took more effort than the other methods, but it yielded the best browning and melting. I was concerned that the hair was burnt, but it wasn't. It tasted like the sugar on top of creme brulee and was nice and crackly. Yum! I think if I'd used white candy melts to attach the eyeballs, it wouldn't be as obvious that they're drooping in the finished Dracula. Next time.  7/10
Enjoy!
Email ThisBlogThis!Share to TwitterShare to FacebookShare to Pinterest
Labels: candy melts, Crafts for Kids, Dracula, edible, Halloween, marshmallow, smores, Wilton