This is my second post about our recent adventures in Seattle. Here is the first post. Because I blog about educational travel, some venues we visited gave me complimentary admission tickets, media rates, and similar benefits. We paid full price for everything else. What we paid has no bearing on my reviews, as I only share what I honestly recommend.
---------

After our fantastic visit to Chihuly Garden and Glass, we headed to the Museum of Pop Culture, also known as MoPOP. It's just a few steps away, on the opposite side of the Space Needle. 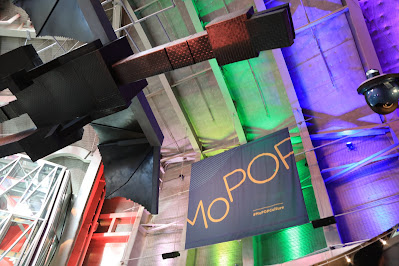 When MoPOP first opened, their focus was entirely on popular music. In 2004, they split the space in two and added the Science Fiction Museum and Hall of Fame. Now, music and science fiction have a significant presence at MoPOP, with even more topics to appeal to everyone. Their mission is to "make creative expression a life-changing force by offering experiences that inspire and connect our communities." The exhibits were definitely inspiring. I could have spent all day looking at the film and TV costume designs by Ruth E. Carter. 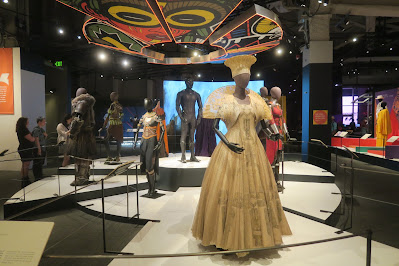 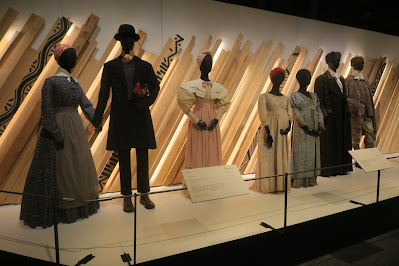 In sharp contrast, I had no interest in lingering in the exhibit about horror films. It was very interesting, but majorly creepy. 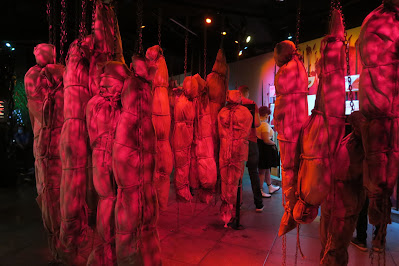 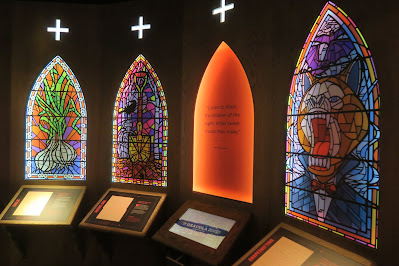 I would have thought a coffin was one place where you wouldn't need to wear a mask. Or carry a camera, for that matter.

MoPOP is large, with many interesting things to see. 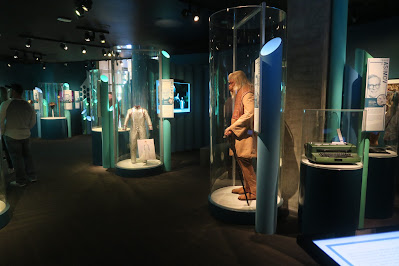 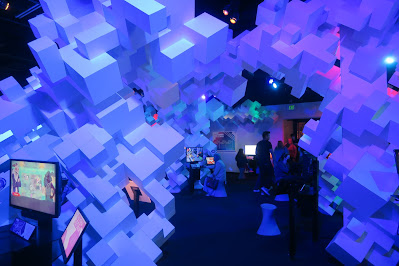 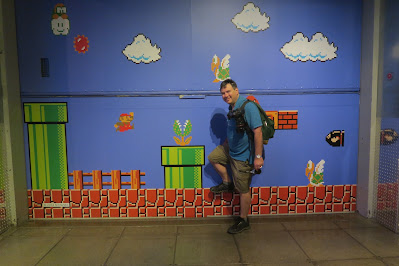 I loved this tornado of guitars.

And these side-by-side displays about the Wizard of Oz and Harry Potter. They were part of a larger exhibit about Myth and Magic that was fascinating. 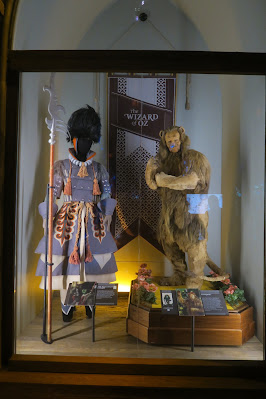 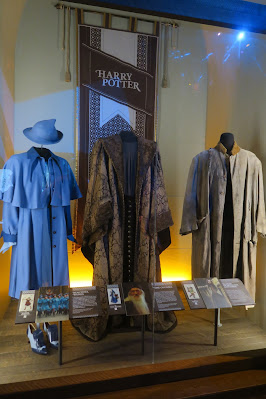 There's so much more to see and do at MoPOP than I can share here. Definitely go! The museum is a lot of fun with something for everyone.

MoPOP, as well as the Space Needle and Chihuly Garden and Glass, are part of Seattle Center. The 74-acre campus has a rich history, including hosting the 1962 World's Fair. It is now a gathering place for both tourists and locals, with tons of neat things to see and do. You could plan an entire trip around Seattle Center and not run out of interesting places to visit.
The Armory Food Hall is in the center of the Center, next door to MoPOP. We went there for a late lunch. After perusing the many options, we settled on a local favorite, Premier Meat Pies. These are the faces of two hungry guys who just want to eat meat pies and don't want to pose for yet another photo. 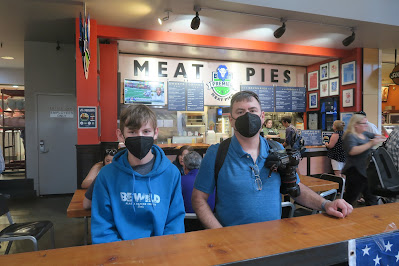 The meat pies were outstanding and totally hit the spot. This is the Chicken Pie, Tillamook Mac & Cheese Pie, and their seasoned tater-tots. All delicious! 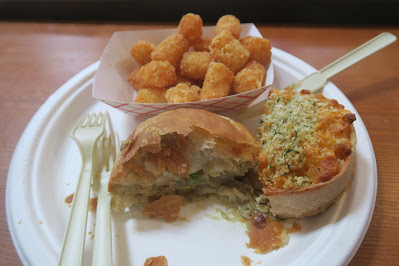 Trevor also got cinnamon glazed nuts from Ceres Roasting Company that were spectacular.
The Food Court is located on the second floor of the building that houses the Seattle Children's Museum. We didn't visit, but we did enjoy peeking down at it from the upper level. 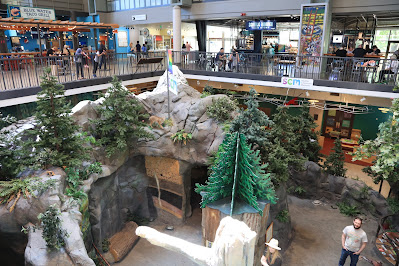 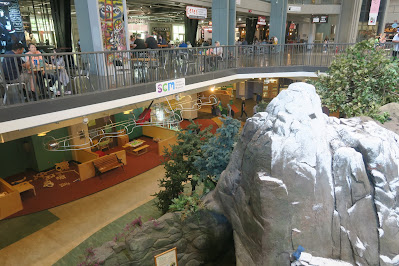 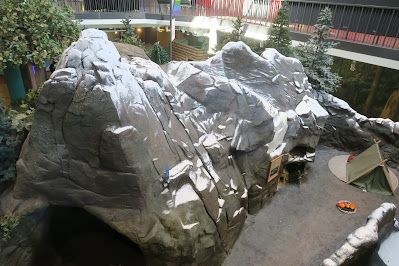 We also did the Pacific Northwest Scavenger Hunt. Signs along the railing explain about plants and animals native to the area, which you can find in the play area below. So clever! 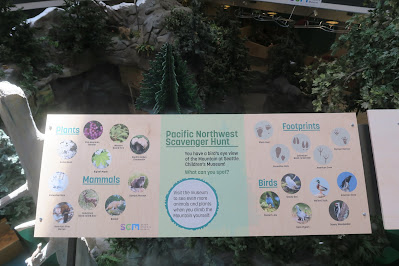 Next up was the Seattle Urban Adventure Quest. Questing is our favorite way to get to know a city. Seattle's starts at the Seattle Center, then takes you aboard the monorail. 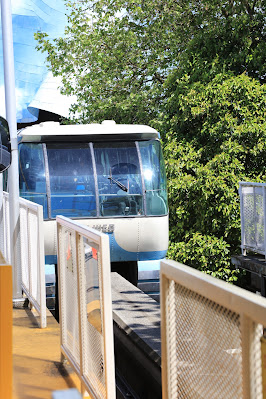 Just like at Disneyland, there are only two stops. When you get off, you're downtown. 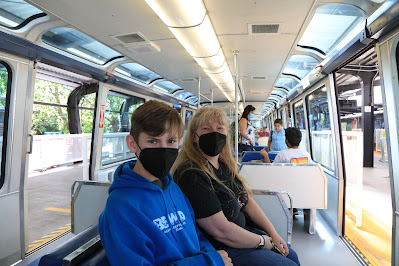 The Quest led us to Pike Place Market.... 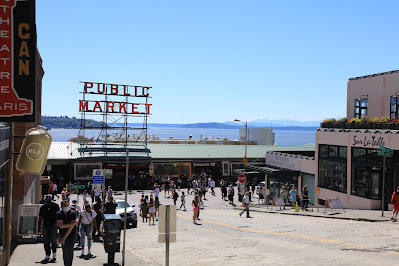 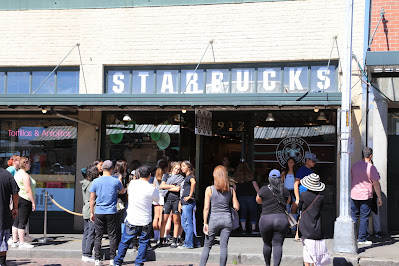 As always, the Quest took us to things we never would have noticed on our own, like Dan Webb's unique way of lighting a stairway. This is one of seven completely different statues. 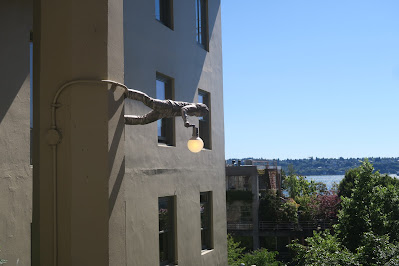 We saw the Gum Wall, of course. Ugh.
As always, we had a great time with the Urban Adventure Quest. There are Quests in 75+ locations; see if there is one near you or at an upcoming travel destination. I hope to eventually experience them all!
After our very full day, we were more than ready for dinner. We ate at Dough Zone. 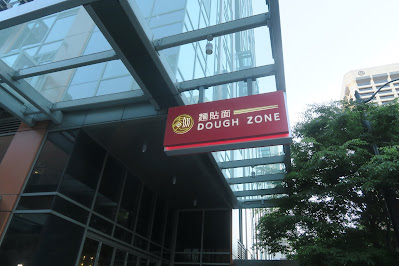 Oh my gosh - it was SO good! This beloved chain started in Washington and now has one location in Oregon and three in California. (But not near us, unfortunately.) We ordered a variety of dumplings, buns, and noodles, which came out individually as they were ready, so everything was piping hot. It was impossible to pick a favorite. If I go again, I'm ordering all the same stuff we got last time plus more. Sooo good! 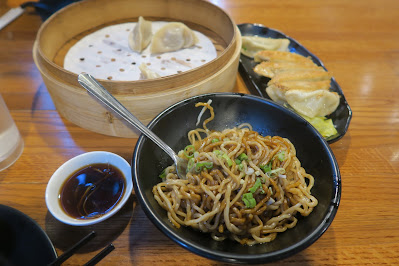 We headed back to our home base at the Hyatt to get some rest. 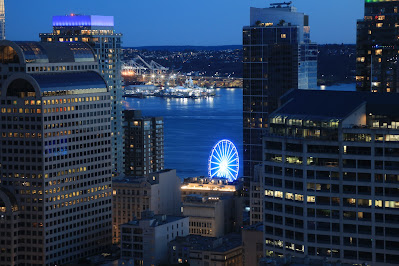 We had another full agenda planned for our second full day in Seattle! I'll tell you about that tomorrow.
Email ThisBlogThis!Share to TwitterShare to FacebookShare to Pinterest
Labels: Steve, Trevor, Urban Adventure Quest, US Travel, Washington