The day before we boarded our Amtrak train to Seattle, something really exciting happened. On June 21, 2022, during his 10th year of Scouting, Trevor officially reached the rank of Eagle.
Trevor completed his Eagle project in April, but he still had plenty to do after that to become an Eagle Scout. He had three Eagle-required merit badges to finish up (Personal Management, Communication, and Emergency Preparedness), a bunch of paperwork to do, a binder to put together, and 5 reference letters to gather. Then came the Eagle Board of Review. On that Tuesday night in June, exactly two weeks after his 16th birthday, Trevor stood before a panel of four Scout leaders for 45 minutes, answering questions about his Scouting experience and his path toward Eagle.
Steve and I nervously waited outside during Trevor's Board of Review. We were confident that he would pass, but it was torture to sit there for so long, wondering how it was going. Fortunately, he did pass and received many nice compliments from the members of his Board. We posed for photos, which you can see in this layout. 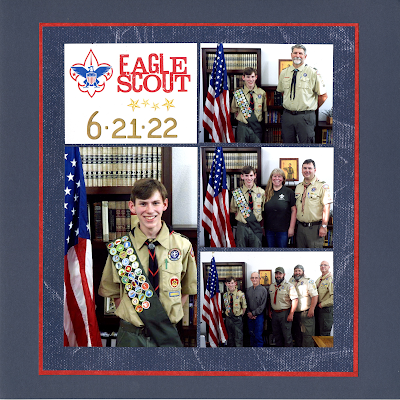 Eagle Scout (affiliate link)
The photo at the top right shows Trevor with his Scoutmaster, Mr. Teresi. The middle picture is Steve and me with Trevor, and the bottom picture has Trevor with the members of the Board: Mr. Gribi, Mr. Jensen, Mr. Baird, and Mr. Patchen.
I love how this layout turned out, crisp and clean. It's the perfect page to document such a great achievement. I'm so proud of Trevor and look forward to his upcoming Court of Honor in September, where he will be presented with his Eagle regalia and will honor those mentors who helped him the most along his path to Eagle. It's going to be awesome.
Email ThisBlogThis!Share to TwitterShare to FacebookShare to Pinterest
Labels: Boy Scouts, Layouts, Steve, Trevor