This is my third post about our recent travels to Seattle. I recommend starting with the first and second posts. Because I blog about educational travel, some of the places we visited gave me complimentary admission tickets, media discounts, and similar benefits. We paid full price for everything else. What we paid has no bearing on my reviews. I only share what I honestly recommend.
---------

We got to sleep in a little bit on Saturday, June 25. Our first appointment wasn't until 10:30 and was less than a mile walk from our hotel. We headed to Pike Place Bakery to get breakfast and sat in Steinbrueck Park to eat. The food was good, but oh my gosh were the crowds terrible. I'd thought the market was crowded the previous day, but I had no idea. 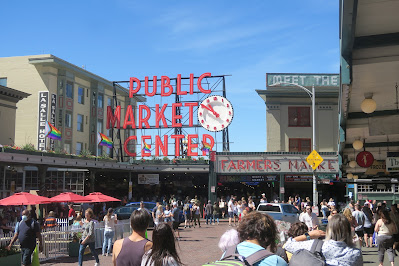 Fortunately, our plans took us away from the worst of the crowds. We met up with our guide, Joe from Seattle Free Walking Tours, for a 2 hour introduction to Seattle. There were about 15 of us participating, and Joe expertly kept us together and entertained the whole time as he showed us everything he loves about his adopted city. 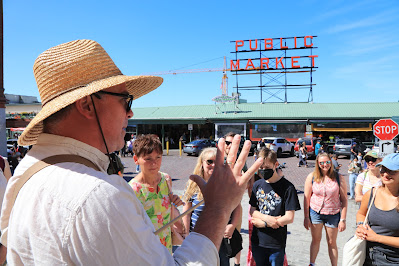 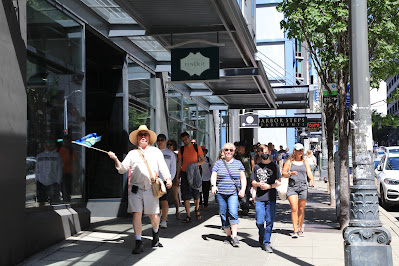 Joe led us along the Market, past the Seattle Art Museum, through downtown, and to Pioneer Square, where we learned so much about early Seattle. 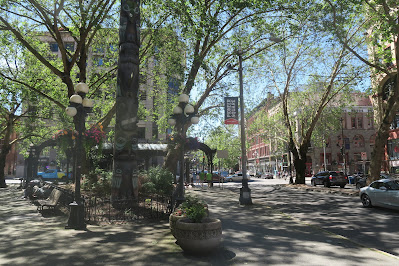 We went down to the ferry docks and then northwest along the waterfront for the last portion of our walking tour. Joe was a fantastic guide and we all learned so much. I highly recommend Seattle Free Walking Tours! 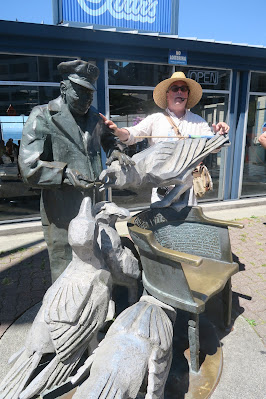 We grabbed a quick lunch from Great State Burger, a Seattle-area chain. The food was really tasty and definitely hit the spot after all the walking. 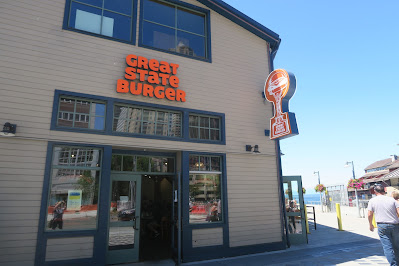 Then we returned to Pioneer Square for our next tour. It took us, quite literally, Beneath the Streets. 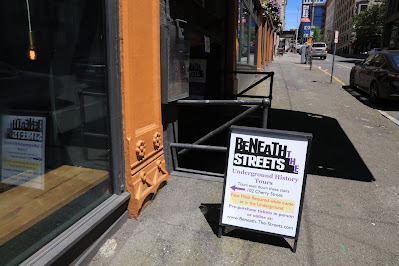 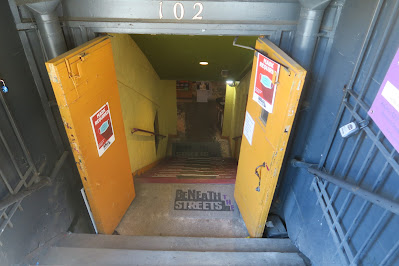 When faced with rebuilding after the 1889 Great Seattle Fire, the people of Seattle opted to raise the city above the tidelands. This would avoid the frequent flooding and prevent sewers from draining into the bay at high tide. What was built as the ground floor would eventually be underground, and the next floor up would be the new ground floor, with streets typically 12 feet higher than before (but up to 30 feet higher in places). The underground spaces were used primarily for storage. They are privately owned and the only way to access them is via tour. Ours started here: 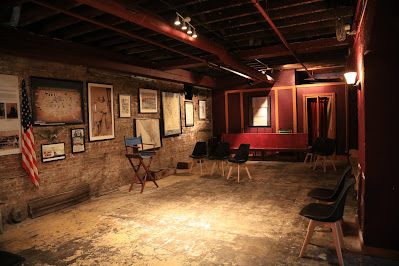 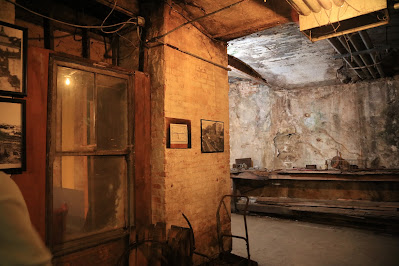 Our guide took our group of seven into multiple underground spaces during the hour-long tour and taught us a lot about the history. It was fascinating! 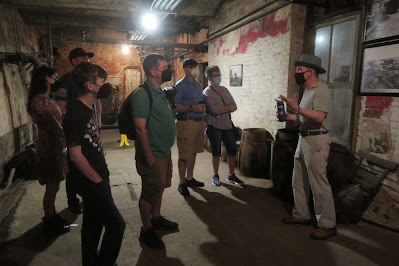 All the spaces we visited were like the photos above - relatively clean, roomy for our small group, and decently lit. Never did it feel confining in the slightest, anymore than visiting a basement anywhere else. There were a lot of stairs, so if mobility is an issue, this is not the tour for you. Otherwise, definitely visit Beneath the Streets to see a part of Seattle that many don't!
A few blocks south of Beneath the Streets is the Seattle Unit of Klondike Gold Rush National Park. We'd previously visited (and loved) the other unit of this national park, located in Skagway, Alaska, so we were excited to see the Seattle portion. It did not disappoint. 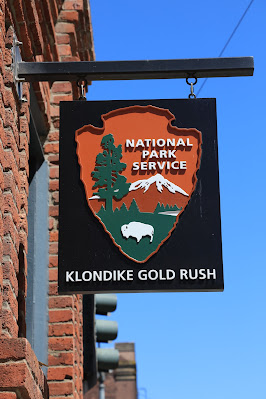 You may wonder what Seattle has to do with a gold rush that took place 1000 miles to the north. The short answer is that Seattle became, through clever marketing, the jumping off point for the thousands of potential miners with Klondike Fever. 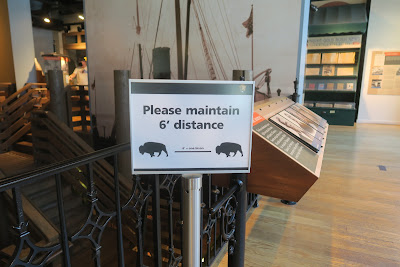 While maintaining one bison of distance between us and other families, we went through the visitor center, learning what life was life for both the miners (most of whom found no riches) and those who stayed in Seattle (many of whom made their fortunes outfitting those miners). We each chose a character whose life story we followed from station to station. Then we spun a wheel to determine our luck. Against all odds, my spin landed on the tiny yellow space. I'm rich! 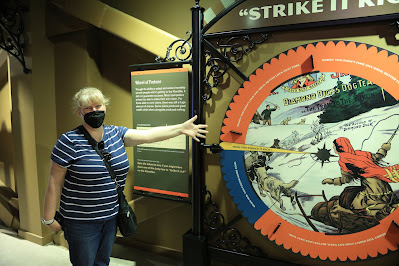 We really enjoyed our time in the museum. 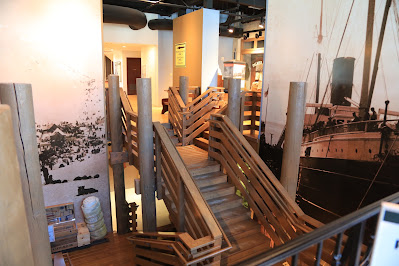 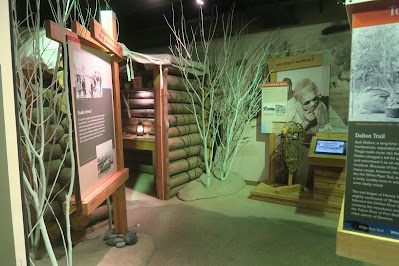 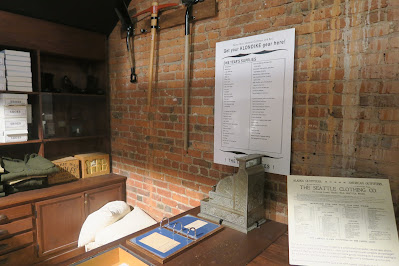 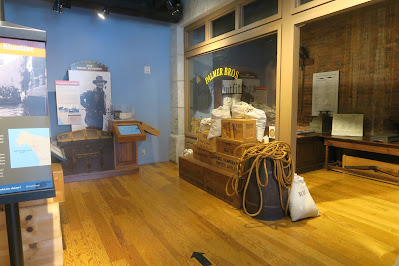 We made a quick stop at the Memorial to Fallen Firefighters, then walked back to Pike Place Market. 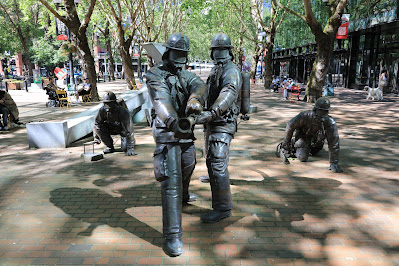 Dinner was at the famous Piroshky Piroshky. Well, not AT it. We got our piroshkies to go. 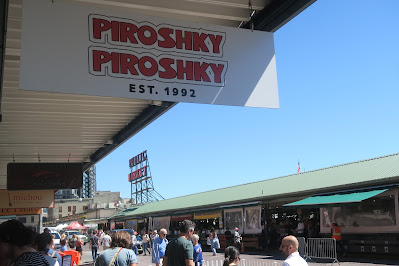 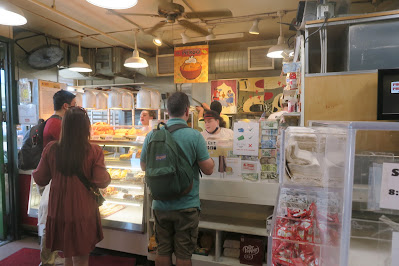 If you're not familiar with piroshkies, they are hand pies common in eastern Europe. They can be filled with pretty much anything, sweet or savory, and they are delicious. This bakery at Pike Place Market has traditional piroshkies as well as ones that are unique to the Pacific Northwest. (Read about their mascot, Phinn.) Every filling has its own shape. 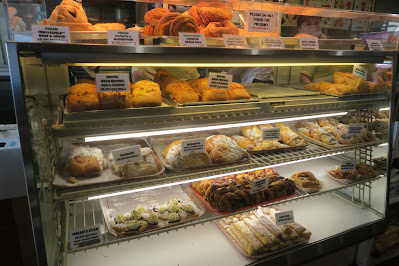 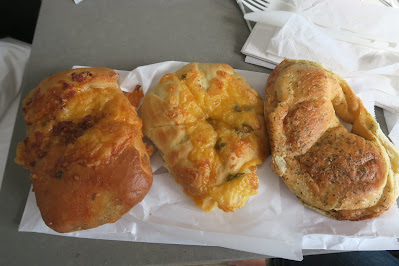 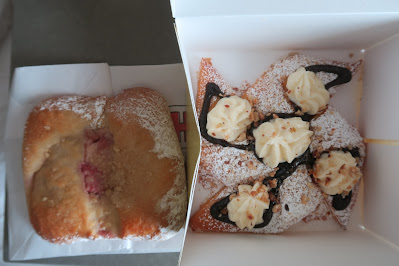 They were fantastic, all of them. If we lived nearby, I'd eat my way through their entire menu. Except the salmon. You know my feelings about seafood.
We didn't know it yet, but the next day would be full of challenges, stress, and eventually, relief. I'll tell you all about it tomorrow.
Email ThisBlogThis!Share to TwitterShare to FacebookShare to Pinterest
Labels: Steve, Trevor, US Travel, Washington