This is my fourth post about our recent travels to Seattle. Click for the first, second, and third posts. Because I blog about educational travel, some of the places we visited gave me complimentary admission tickets, media discounts, and similar benefits. We paid full price for everything else. What we paid has no bearing on my reviews because I only share what I honestly recommend.
---------

We awoke to a beautiful day on Sunday, July 24. Our plan was to complete the Seattle Mini Quest (the shorter of two Urban Adventure Quests in Seattle), return to the hotel to pack, get a Lyft to the cruise ship terminal in time for our 11:45 am dockside COVID-test appointment, cross our fingers for three negative results, then board the ship in time for lunch. That is not what happened.
We started the Quest in plenty of time for things to happen as scheduled. As we made the mile-long walk to the Seattle Center where the Quest started, we noticed there were way more people on the street early on a Sunday morning than there should have been. They were all going the same direction as we were. We were headed toward something we didn't even know was happening that day - PrideFest. 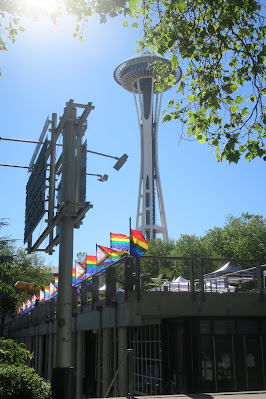 Fortunately, it was early and Seattle Center wasn't too crowded yet, so we were able to complete that portion of the Quest without a problem. We didn't waste any time though, as it was starting to fill up. The next questions led us to Olympic Sculpture Park and the waterfront, which weren't crowded at all. 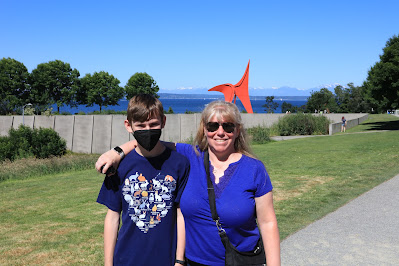 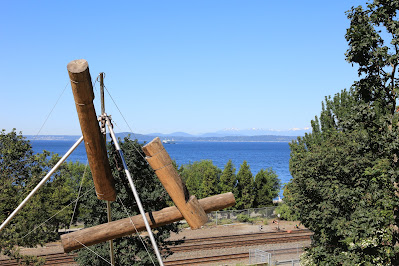 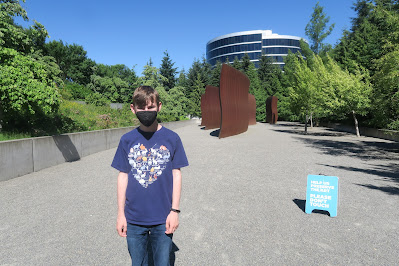 As always, we thoroughly enjoyed the Quest and it took us to things we otherwise probably wouldn't have seen.
Walking back to our hotel, we saw a road closure. Then another and another. When it dawned on us that there was going to be a Pride parade, we got a bit nervous about our plans to have a Lyft driver take us to the pier. The 3.5-mile drive could be a lot longer than the 15 minutes we'd budgeted. We'd need to pack quickly. Not a problem; we packed and checked out of the hotel with plenty of time.
Our drive was indeed longer and slower than expected due to road closures. We twisted and turned to get around closures. We'd be cutting it close, but we could still arrive in time for our appointment. Steve and I both thought it was weird when the car headed uphill in a residential area, but neither of us said anything until the driver stopped here and told us we'd arrived: 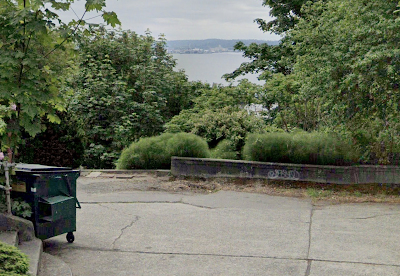 That isn't the actual photo; it's a screenshot from Google Maps. If it were the actual photo, you would see a cruise ship WAY down below us in that water. Our driver's English was limited, but we did our best to get across that we needed to get on that ship and that we could not board it from this cliff. He did get us there eventually, thank goodness.
We arrived at noon, the end of our 15-minute appointment window for COVID testing. Ahead of us was the longest line I've ever seen. This was my 21st cruise and I had an expectation of how boarding would go, but this was unlike all previous trips. Long story short, I parked Trevor and Steve in the huge line while I ran around asking where we were supposed to go for COVID tests. Each employee I asked sent me somewhere different, which I would then check out and discover it was the wrong place. Finally, someone sent me to a white tent at the end of the pier. I texted Steve and Trevor, who met me in the tent, where a bunch of other passengers were ranting about the ridiculously poor handling of boarding. Huge kudos to the nurses; it wasn't their fault, but they had to listen to everyone's frustration. They were kind and efficient and sympathetic.
Waiting for our test results was tense. My parents, aunt and uncle, and sister's family had already passed their tests and were boarding. Would we be allowed to go on this cruise that had been postponed twice?It would have been devastating to have been denied boarding. Fifteen minutes later: negative, negative, negative - hurray!
We got back in the enormous line. It took 1 hour 40 minutes to get onboard, and that's with skipping ahead at the very end because of my Elite status. I was so glad to be on the ship and see my family.
Next week, I'll tell you about the cruise itself. (Spoiler: We had a wonderful time.)
Email ThisBlogThis!Share to TwitterShare to FacebookShare to Pinterest
Labels: Steve, Trevor, US Travel, Washington