Cruising to Alaska aboard the Discovery Princess

While boarding the Discovery Princess in Seattle was a giant pain, the excellent food, service, and accommodations of the ship more than made up for it. By the evening of Sunday, June 26, I'd put the day's stress behind me and I was fully into cruise mode. 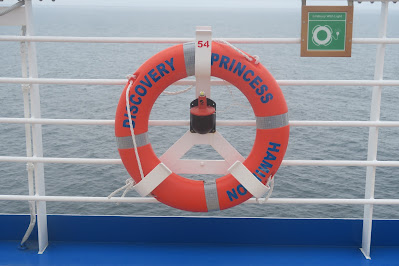 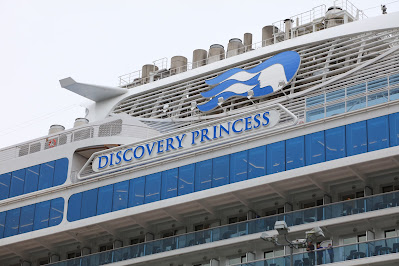 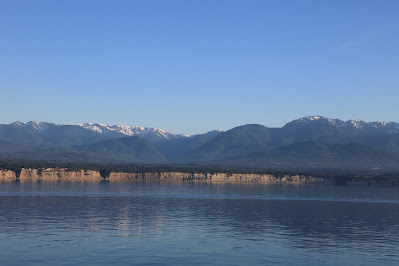 The reason for the 7-night cruise was to celebrate my parents' 50th (and 51st and 52nd) anniversary. My Uncle Don and Aunt Vickie were there, as were my sister Kari, my brother-in-law Brian, and my niece, Allison. (Nephew Timothy couldn't get time off work to go, which was hugely disappointing.) 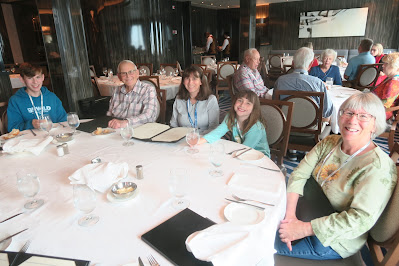 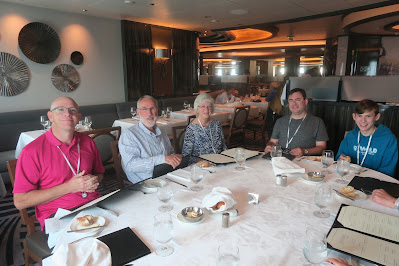 Me
Cruising is my favorite way to travel with a group. With just our family of three, intensive road trips and city deep-dives work great, but with each additional person, the logistics increase exponentially. Planning how and when to meet up is a nightmare. On a cruise, everything is so much easier.
We'd all been to Alaska before, some of us many times, so while we were looking forward to the port days, it was the time onboard the ship with the family that was the most special. We spent a lot of time together playing games. 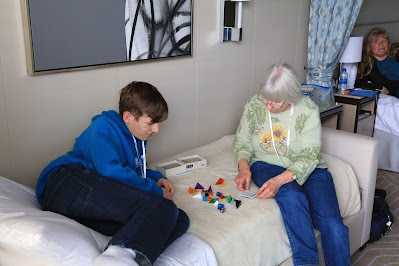 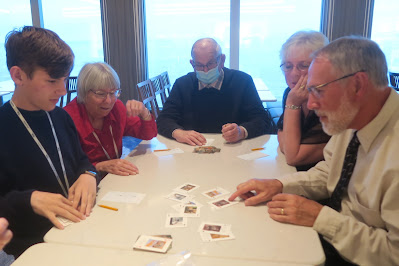 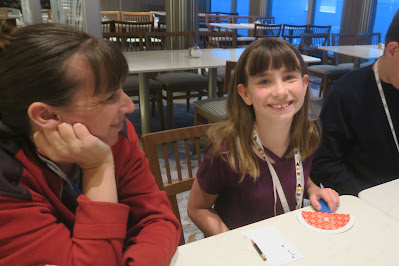 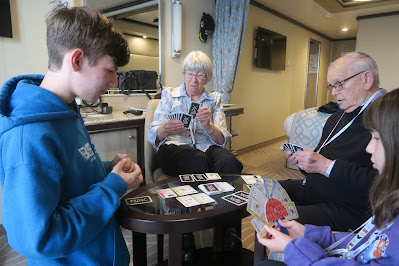 The Estajonesiers had three mini suites in a row (Don and Vickie were down the hall a bit), so we asked our cabin steward to open the doors between our balconies. That gave us one long balcony where we could hang out together. 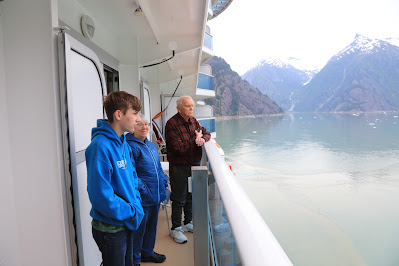 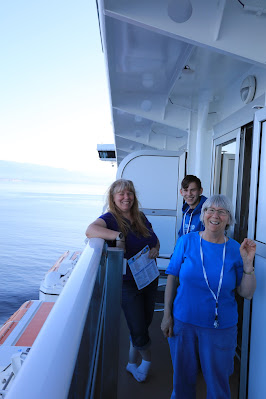 Kari was obsessed with seeing orcas, so you could find her on the balcony at all hours with her binoculars. It was awesome, because I knew exactly when to look up in order to see ocean life. She did all the work for us! 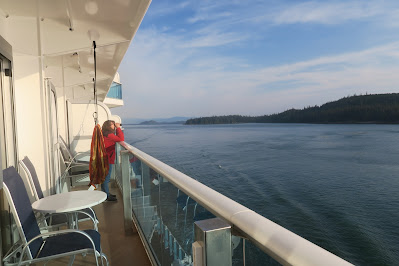 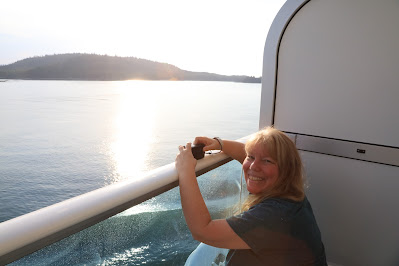 We did breakfasts on our own, then gathered for lunches and dinners. We made a standing reservation, so we didn't have to make daily plans for where and when to meet. As a bonus, our waiters got to know us. They treated us very well, especially Allison. 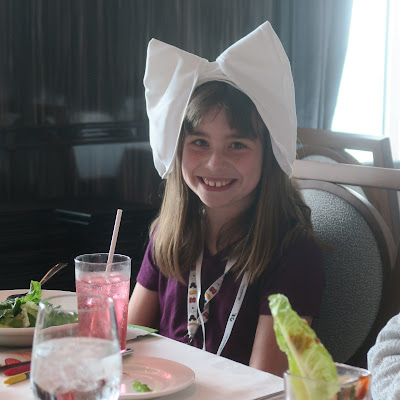 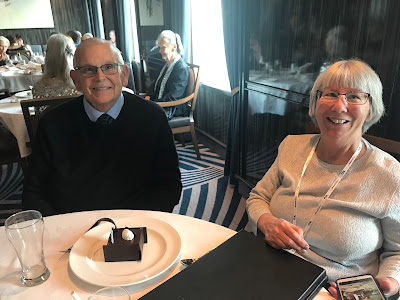 There is so much to do onboard a Princess cruise, and usually we take advantage of as much of it as possible: production shows, trivia, competitions, mini golf, Movies Under the Stars, wine tasting, ice carving demo, galley tour... the list goes on and on. This time we did none of those. We did attend all of the Enrichment presentations: four of the naturalist's lectures, a presentation by Libby Riddles, and a lecture by a Deadliest Catch captain about crab fishing in the Bering Sea. But otherwise, we read, chatted, played games, strolled, ate, and watched the scenery go by. It was wonderfully relaxing. 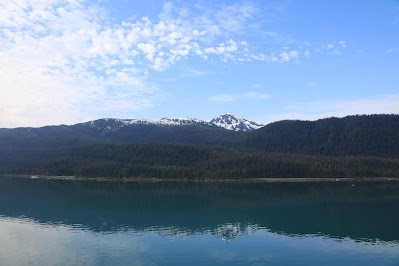 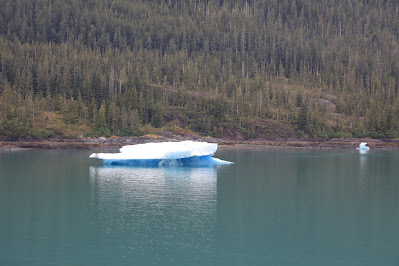 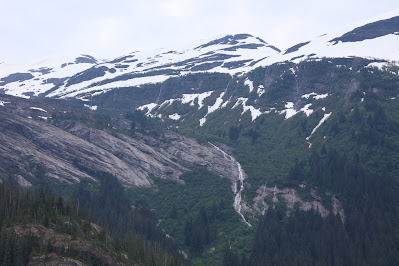 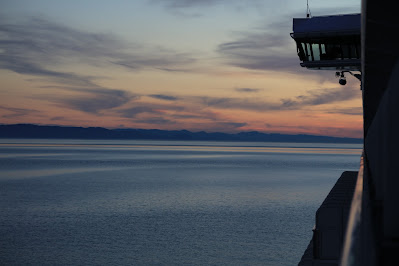 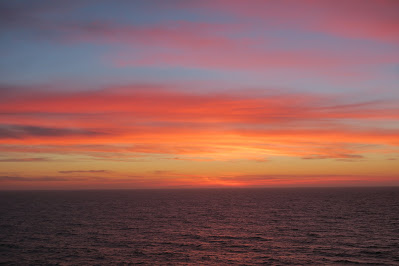 Our itinerary was supposed to take us to Ketchikan, Dawes Glacier, Juneau, Skagway, and Victoria BC, before returning to Seattle. But there were a few changes of plans. You may have heard about the Norwegian cruise ship that hit an iceberg in Alaska. That was four days before we were supposed to go to Dawes Glacier. Our captain entered Endicott Arm and took us as far as we could safely go before turning around, long before reaching the glacier. Everyone appreciated the caution. The second change is one you probably didn't hear about. On the cruise before ours, our ship received cosmetic damage when it was docked and hit by a rockslide in Skagway. We received word shortly into our cruise that until the land was stabilized and engineers declared it safe, ships wouldn't be docking at Skagway. We would instead be going to Icy Strait Point.
These changes affected us a lot less than most passengers. Having been to Alaska so many times before, we had already done all of the shore excursions that interested us. With no shore excursions booked, we  had no changes to make. And having no shore excursions meant that our days in port were leisurely and at our own pace, which helped make this one of the most relaxing trips I've ever taken.
Even though we didn't tour as part of a group, we did do plenty ashore in Ketchikan, Juneau, and Icy Strait Point. We opted not to get off the ship in Victoria. We'd already done numerous shore excursions there and had planned to revisit the spectacular Royal BC Museum. But when they changed our docking time from midday to 7:00 pm, that meant the museum wasn't an option. We enjoyed the mostly-empty ship instead.
Tomorrow I'll tell you all about our time in Ketchikan.
Email ThisBlogThis!Share to TwitterShare to FacebookShare to Pinterest
Labels: Alaska, Allison, Brian, Cruises, Dad, Don, Kari, Mom, Steve, Trevor, US Travel, Vickie