On Wednesday, June 29, we visited Juneau, Alaska. This was my 7th time visiting Alaska's state capital. Small in population but enormous in area, Juneau is a charming town with lots to see and do. During past visits, we've been gold mining, visited the Capitol and the State Museum, explored the rainforest, been to the city museum, gone eagle spotting, visited Mendenhall Glacier, searched for geocaches, and even taken a ride with sled dogs.
This time, Brian (my brother-in-law) disembarked as soon as we docked in order to rent a car. Mom, Kari, Allison, Steve, Trevor, and I waited on the dock for him. 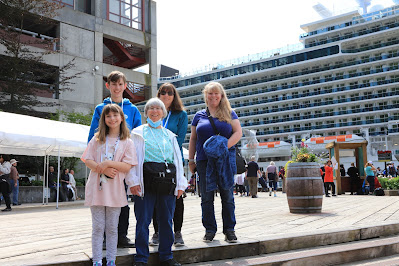 We piled in and headed toward our first destination, Mendenhall Glacier. But first, we stopped at a gas station. Not for gas, but to admire the dozens of bald eagles sitting casually in the trees. There are at least three in this photo. Can you spot them? 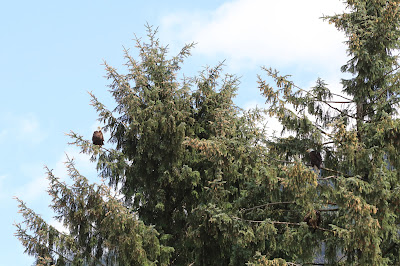 Juneau is one of the best places to spot eagles. In fact, it is hard NOT to see eagles. There are at least 18 in this photo. 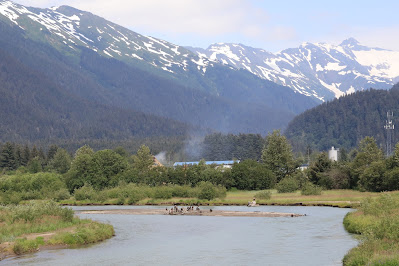 And this was in June, before the salmon were running. It's even easier to see eagles (and bears) when the salmon are such easy pickings.
After admiring a whole bunch of eagles, we headed to Mendenhall Glacier. As I said, we've been there before. In fact, the first time I visited was in 1988 when I was 16. It has receded about a mile over the past 34 years. This is the view from the visitor center now. 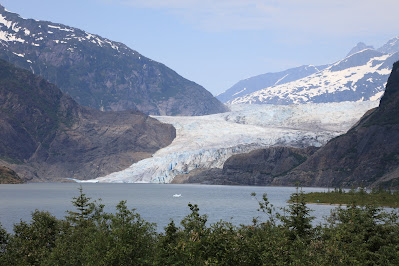 There are a bunch of trails surrounding the visitor center, all very well-maintained and beautiful. 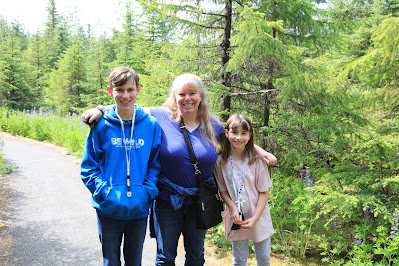 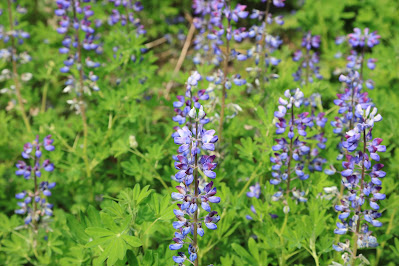 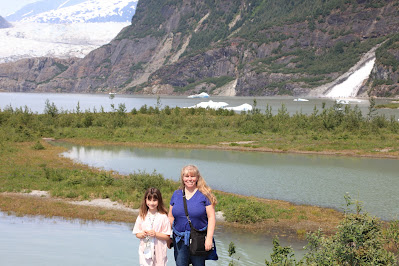 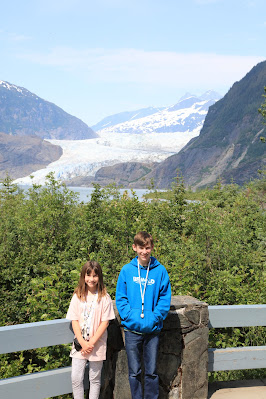 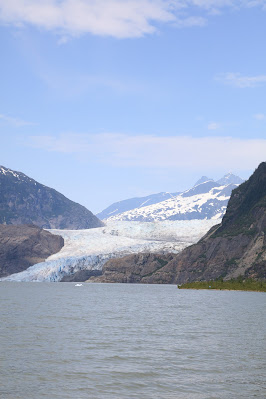 Steve hiked to the waterfall while the rest of us watched the Mendenhall Glacier movie in the visitor center. 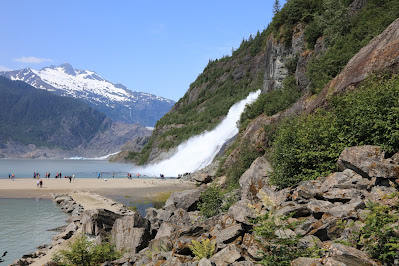 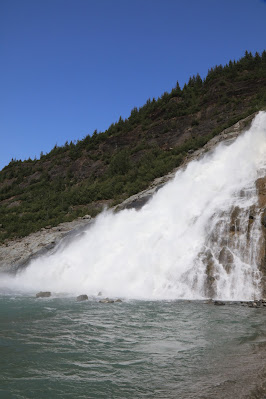 Next, we went to stunning Eagle Beach State Recreational Area. All of us except Brian have seen bears during trips to Alaska and he was determined to see a bear. He'd heard that if you would see one anywhere, it would be here. While it was absolutely gorgeous, it was bear-free when we visited. 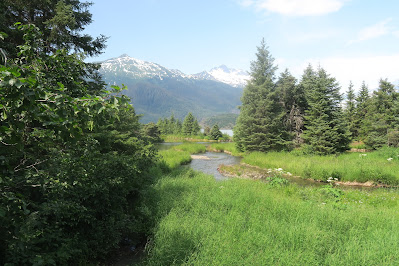 Well, probably not. It would be more accurate to say that there were likely bears all around us who were not interested in being seen. 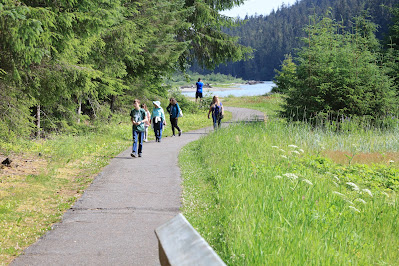 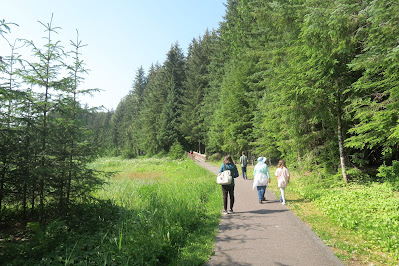 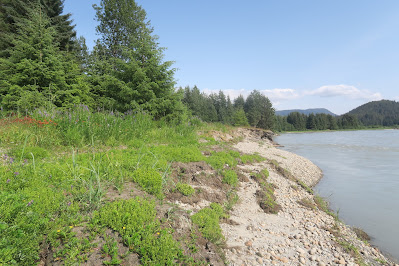 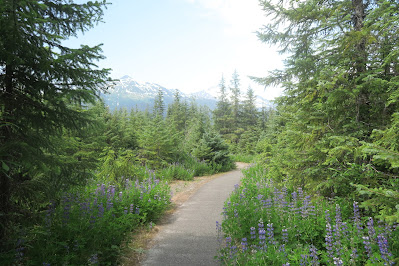 Poor Brian. He sat alone with the binoculars, willing a bear to come. None did. 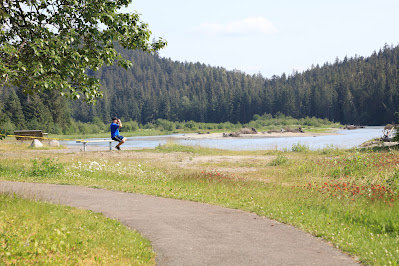 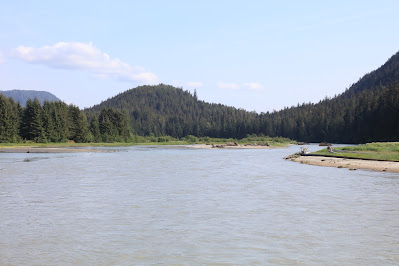 The area was so pretty and almost completely deserted. We saw exactly 2 other people the whole time we were there. (And no bears. But plenty of eagles.) 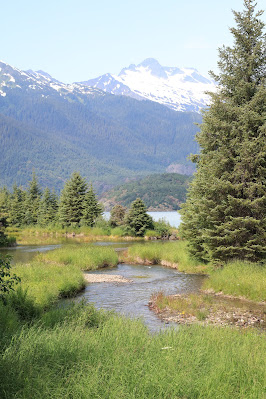 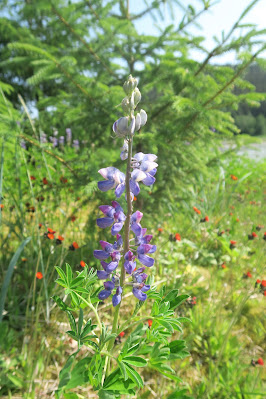 We'd hoped to get back into town in order to pop into the Capitol before it closed. Last time we were there, it was under construction and we wanted to see what the new interior looked like. But we missed it by a minute or two. Not a big deal though. I'd much rather see the beauty of Alaska's landscape than the architecture of its Capitol.
Our next port of call was Icy Strait Point. We'd only been there once before, in 2007. We were among the very first cruise ships ever to dock there. And I use the word "dock" loosely, as there wasn't a dock. Technically, we anchored there. We were all excited to see what changes, if any, had taken place in 15 years. What we saw amazed us. I'll tell you all about it tomorrow.
Email ThisBlogThis!Share to TwitterShare to FacebookShare to Pinterest
Labels: Alaska, Allison, Brian, Kari, Steve, Trevor, US Travel