Until recently, the longest train trip I'd ever taken was about five hours. Now, the longest train trip I've ever taken was 20 hours... and I did it twice. It was fantastic.
Some background: My parents' 50th anniversary was June 20, 2020, which we'd planned to celebrate with a cruise. COVID-19 interfered. We rescheduled the cruise for 2021. COVID ruined our plans again. But as they say, the third time's the charm. We successfully celebrated their 50th anniversary (as well as their 52nd anniversary) with a fabulous Alaskan cruise. More on that later.
The cruise was round-trip from Seattle. My parents and sister's family would be driving from Boise. My aunt and uncle were driving from Spokane. Our family of three, coming from California, wanted to arrive a few days early to explore Seattle. We considered our options. A 2-hour flight would be the fastest, but plane tickets are outrageously expensive right now. We'd either need a ride to and from the airport in Sacramento or we'd need to pay to park there for two weeks. And we'd still need transportation once we got to Seattle. A 14-hour car drive would mean we'd have transportation in Seattle, but between the current gas prices and the cost of parking in downtown Seattle we ruled that out immediately. A 20-hour ride on Amtrak would be the slowest option... maybe. It's likely that if we'd driven, we would have split the drive and stayed in a hotel somewhere in Oregon. On the train, we could read or play games or nap or even work. And we'd get to see the beautiful scenery along the way. We priced tickets and discovered that coach seats were only about $80 each - fantastic! Decision made.
On Wednesday, June 22 we boarded Amtrak's Coast Starlight in Davis around 11:30 pm (delayed from the scheduled 11:11 pm departure). The train was dark and most of the passengers were already asleep, but we had no problem finding our seats. 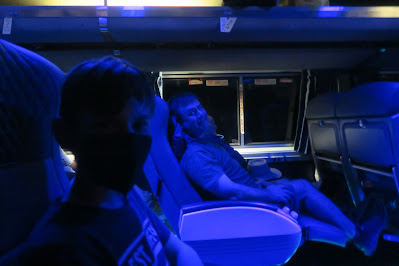 The seats were very roomy and comfy. They reclined way farther than I expected. Yet sleep was difficult. 99% of our fellow passengers were courteous and obeyed Quiet Hours, but it only takes the one to ruin things for everyone. I don't typically sleep well the first night somewhere new, so I wasn't expecting much sleep, but I hadn't anticipated someone making random phone calls throughout the night. Nor did I think to close my curtain when I boarded close to midnight. One day after the summer solstice and at a latitude farther north than my own, I woke with the light before 5:00 am. 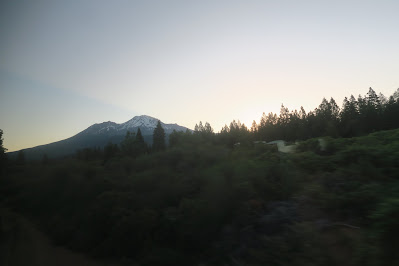 I was tired, but I wasn't mad. The scenery was beautiful and it was so relaxing to just watch it go by. Over the next few hours, I took a ton of photos, all fairly blurry. 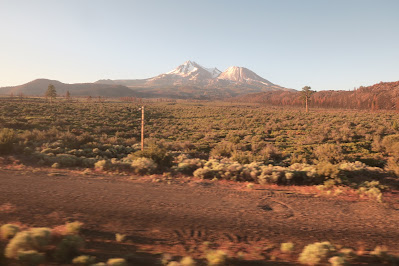 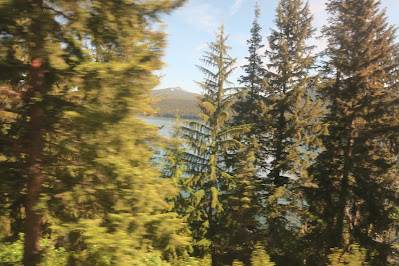 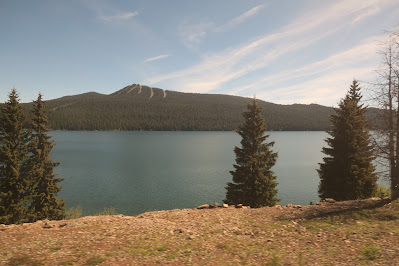 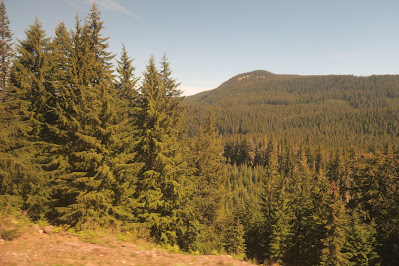 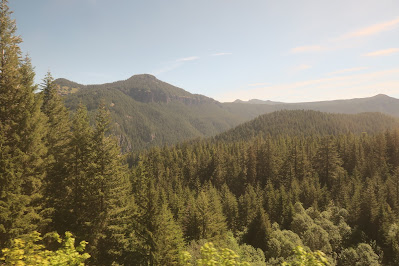 I was obsessed with trying to get a photo of our train. Our car was toward the back, which meant that I could see the engine and some of the first few cars whenever we made a turn toward the right. Here are two times I was successful. 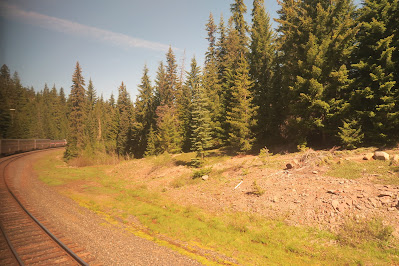 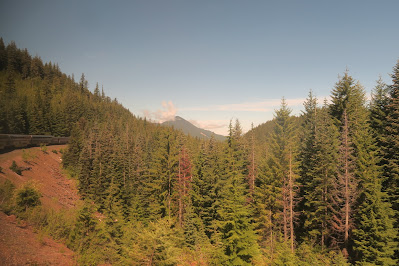 The Coast Starlight makes daily trips between Seattle and Los Angeles - one northbound train and one southbound. The entire journey is 35 hours; ours was 20 because we started in Davis, marked with the arrow. 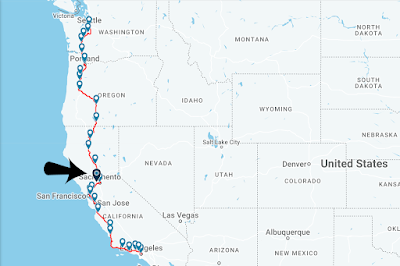 As you can see, the "coast" part of the Coast Starlight is in Southern California. North from Davis, we weren't traveling along the ocean. But we did see plenty of water in the forms of lakes, rivers, and waterfalls (and some rain during our return trip). 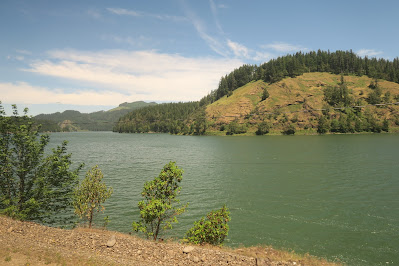 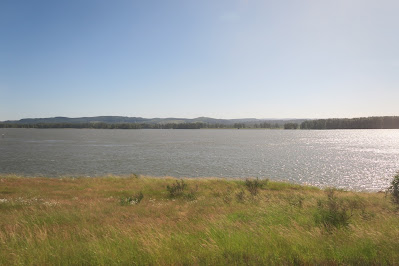 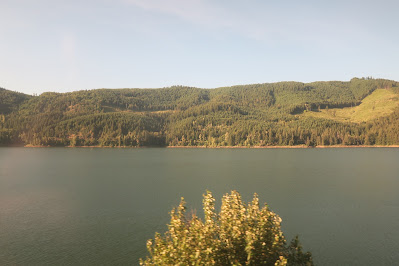 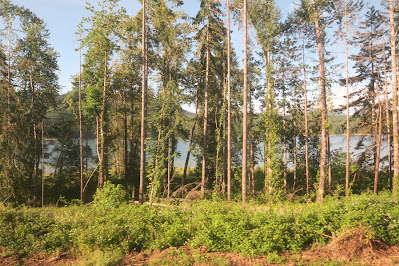 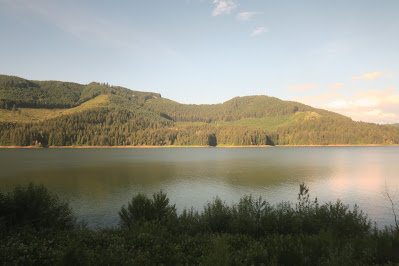 We also saw tons of wildflowers and so much green. 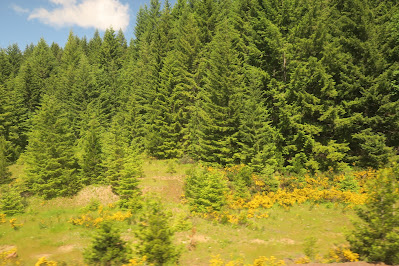 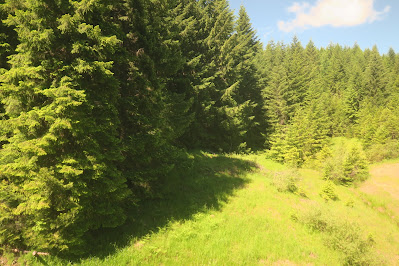 When we reached Portland, park rangers came aboard to narrate the trip from the observation car. Seating there is first-come first-served, but we had no problem finding seats both northbound and southbound. 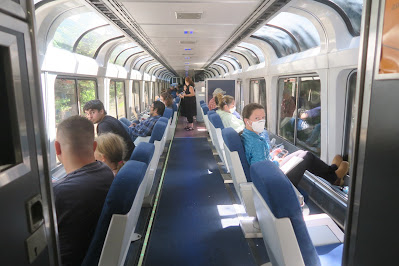 Masks were optional onboard the train. Steve and I opted not to wear ours; Trevor wore his. I'd say about 30% of passengers wore masks. 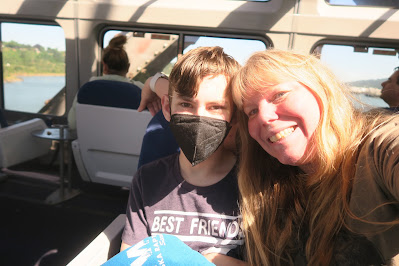 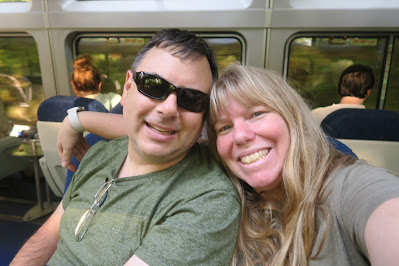 The park rangers pointed out tons of interesting things as we headed north. Between the glare and the blur, it's a bit hard to fully appreciate, but this is the World's Largest Egg. 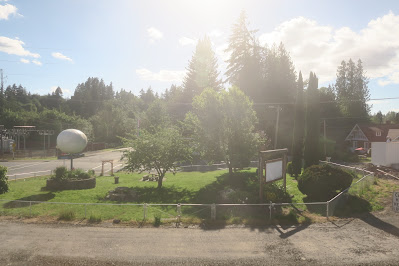 Here's Steve taking pictures as the rangers tell us about the Columbia River, the second largest river in the US. It forms the border between Oregon and Washington. 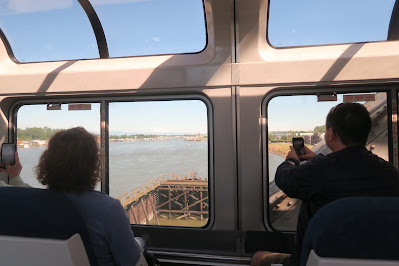 The back of the observation car has seats facing the windows. The front of the car has tables. Steve snagged one when we were southbound. 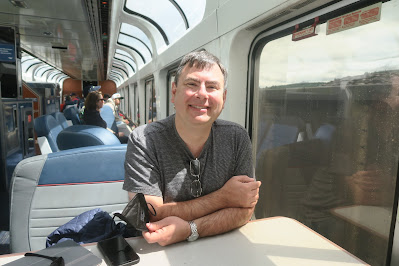 It was a nice option for eating meals, working on the laptop (Steve), and drawing (me). It was also where we met our new friend Kim, founder of We're the People, podcaster, and on the production team for a bunch of cool TV shows. Trevor did hang out at the table during dinner, but spent the rest of his time back in coach, playing on his Switch day and night. It's really nice traveling with a teenager who can do his own thing. 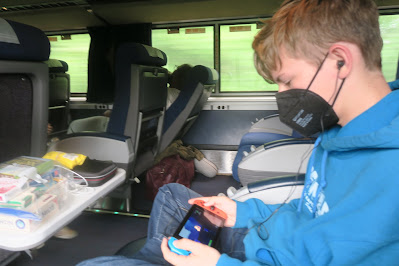 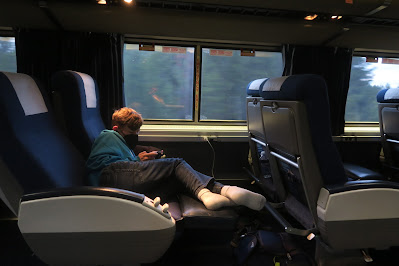 The picture above does a pretty good job of showing how roomy the coach seats are. Trevor had his seat partially reclined and the foot rest up, and he was able to sprawl fully within his own seat. With my seat fully upright, I could stretch my legs completely and not quite touch the seat in front of me. There was plenty of room to stow a bunch of stuff beneath the seats. We stored our large luggage downstairs; some stations offer checked luggage. Davis does, but not after the station closes at 4:00 pm. 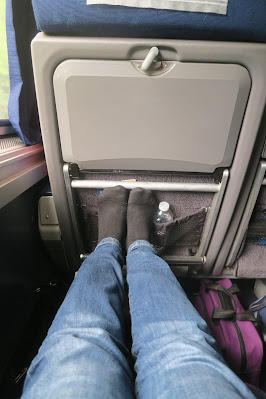 They also had roomy overhead compartments that were virtually empty. We tucked food up there. 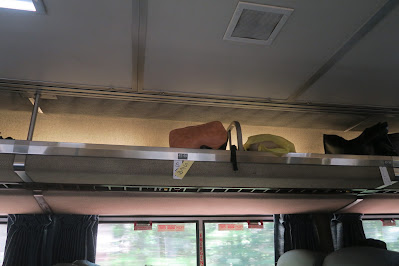 Speaking of food, the main downside to coach is that you do not have access to the dining car. Instead, your options are bringing your own food or visiting the cafe car. The cafe served a wide variety of drinks and snacks, along with sandwiches and microwavable meals. Both north- and southbound, I only ate the food we bought. Trevor and Steve each bought a few meals from the cafe, with mixed success. They liked the breakfast sandwiches, but neither was a fan of the microwaved hamburger.
Hours before we'd left home, I'd received a sampler pack of Red Chocolate bars to review. I'm very glad I was home to receive them vs. having them sit on the hot porch for 2 weeks! They made a great snack to bring along on the train. 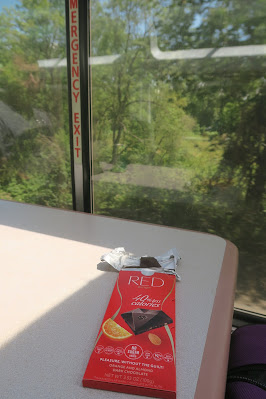 RED Chocolate is unique in that it has no added sugar, up to 50% fewer calories and 30-40% percent less fat. I received the six-bar variety pack. My favorite flavors were the Orange and Almond Dark Chocolate and the Hazelnut and Macademia Milk Chocolate. My least favorite, the Blond Caramelized White Chocolate, was Trevor's favorite. Overall, we enjoyed them. Having a square here and there during our vacation was a nice indulgence.
A few more things to mention about travel on the Coast Starlight:
The train makes regular stops, but most of the stops are very brief. Once or twice, we stopped long enough that we were allowed to get off the train. We opted not to. The penalty for not making it back onboard in time would be waiting 24 hours for the next train. The trains are completely smoke-free (hurray!) so a few people used those stops for smoke breaks.
Amtrak does not own the tracks. Therefore, there were numerous times we had to yield to other passing trains. This can create delays, so plan for that and be pleasantly surprised if your train is on time. It usually is, within a few minutes.
Shoes are required onboard the train for safety reasons. We took our shoes off to sleep, but put them on any time we got up for any reason.
A handful of bathrooms are located in each train car. Most are similar to airplane bathrooms, though each car has a larger stall for passengers who need the extra space (including those who are changing clothes - we didn't). I never had to wait for the bathrooms like on a plane, plus there were no rules about when you couldn't use the bathrooms like on a plane. Coach seats have no access to showers, but for a 20 hour trip I wouldn't have showered anyway.
We loved our time on the Coast Starlight and would absolutely travel that way again. Let me know if you have any questions! Tomorrow I'll tell you what we did after reaching the northern terminus of the Coast Starlight, the beautiful city of Seattle.
Email ThisBlogThis!Share to TwitterShare to FacebookShare to Pinterest
Labels: Amtrak, Steve, Trevor, US Travel